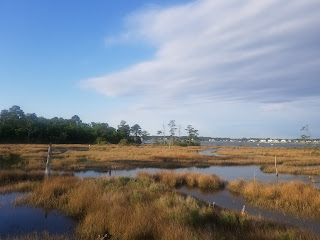 
Trip Report:
Norfolk has a trail-running and hiking gem in First Landing State Park. It is an easily accessible and beautiful place with more than enough trail options to make regular return visits. I know if I lived here that would be true for me. This was a vacation run for me while I was in town for my sister-in-law's wedding. As usual I looked for an early morning spot for some big miles and am most pleased I found this. 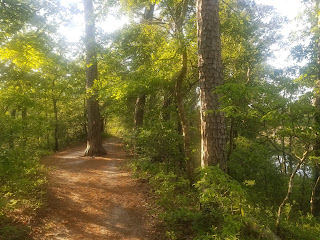 As I was intrigued to learn, the park is so named because Cape Henry, the land upon which this park sits, was the landing site of the first group of English settles who came upon North America. This group that landed here would eventually move on west and form the first town of Jamestown. While running here one can't help but contemplate what this place must have looked like 400 years ago to those who came on ships to see its ground for the first time. It is said this Park is also distinctive for a biological reason. It is the northernmost place on the east coast where subtropical and temperate plants are still found growing together.
I came to the park at 6:30am hoping to have time to get in 12 miles and still return to the hotel to be ready for an afternoon wedding. I paid the self-pay park fee ($10) and was a lone car in the lot. I wasn't sure if I would be alone today as I have been at other early morning trail-run excursions or if this would prove to be a popular spot. The latter was true. Plenty of people to be found as the morning move on. For the most part people were pretty good as recognizing trail-runners coming up from behind them and making room. 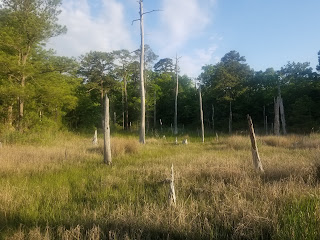 So looking for 12 miles today I was mentally putting together a combination of the trails here with some big out-and-backs. I started at the main visitor center parking and followed the Cape Henry Trail into the park. The initial 3/4 of a mile was all like a paved bike path. After passing the Trail Center and the road heading into it the trail turns into a double track trail. This is a multi-use trail with bikes and families with strollers and the like. I hopped off the CHT fairly quick to do the Bald Cypress loop. I wanted to see what it was like and hopefully hit it before too many hikers came in. I was all alone on it. One or two small sections of boardwalk but otherwise just a beautiful single track with views of the swamp off the side. 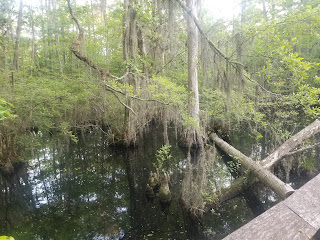 The Bald Cypress loop was about 1.7 miles and spit me back onto the main CHT. I took this south to the Kingfisher trail which takes you closer to the water's edge. It spit me out onto the Long Creek Trail and this is where things really got beautiful. I can only let the pictures tell the story here. With the sun lighting everything up it was a delight to run through here. Yet ironically, it was also amidst this beauty that the morning's plans changed. I could see darker clouds approaching from the west and so checked the weather on my phone. It showed a 30 minute storm approaching and I had to decide how I wanted to handle it. On the Long Creek Trail I was heading further into an out-and-back taking me quite a few miles from the car. I decided to do a turnaround and head for the car. I figured if things got bad for 30 minutes I could hunker down in the vehicle and then hop back out to finish my mileage.
As the time for the rain to start drew near nothing was happening. Another 10 minutes pass and I hardly felt a sprinkle. It was becoming evident the forecast was a dud. So I changed course again. Back at the Trail center I followed the road to the beginning of the Lost Creek trail and ran the section I hadn't hit yet. It was more beautiful single track near the water's edge. Quite a handful of hikers through here. When I hit the junction with the Kingfisher Trail I used it to regain the CHT. I knew now I had my miles for the day and just needed to do the 2 remaining back to the car. I was very impressed with the pristine quality of all the trails encountered. Beautiful pine beds in places, sandy sections in others, and even some rooted parts. No mud, no issues anywhere. The junctions were all fairly well signed as well and this made navigation relatively easy.
I was pleased with my own performance today. I would call it a fairly light effort. I'm in the midst of training for the Marquette 50 Ultra in the UP of Michigan in August and my first couple months of training were a real struggle. I was battling my body and having some inexplicable poor performances. In the last couple weeks however I've made some corrections to my running form and my training has also really begun to pay off and I'm feeling strong and confident on my runs and today's 12 only serves to reinforce that. Stay the course. 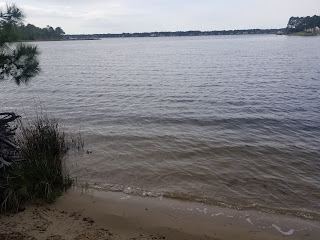 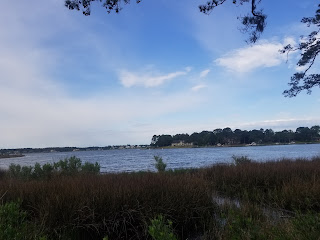 Track:
I have a track and waypoints from the hike all contained in the embedded Google Map. Check it out and use at your own risk.
Labels: Running Trip Report Virginia
Location: Bald Cypress Trail, Virginia Beach, VA 23454, USA