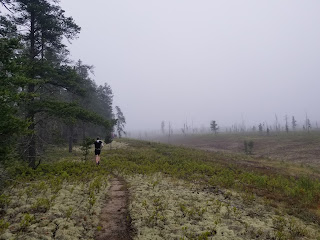 
Trip Report:
This was a fun return to most of a course I ran into 2017 when I did the Two Hearted Trail Marathon. This year was time to step up to another ultra and do the 50K. Officially I would list this as a training race for me as my main goal this summer is getting ready for the Marquette Trail 50. I did give this race my full attention, however, and feel I ran it about as hard as I could.
In this report I'm not going to give an overly detailed description of the course as I covered a lot of that in my 2017 report. I do wish to recap for my purpose's and others a basic report of how the race went and things that were learned. That is always one of the fun parts of running ultras is the learning and troubleshooting of problems as they arise.
One of the problems that had me concerned leading up to the race this year is I have been dealing with plantar fasciitis in my right foot. It has been nagging me on and off for almost a year now. I've been trying different measures to mitigate and heal it but have not quite gotten it back to 100% yet. I have been thankful that during my four months of increased training so far it has not gotten worse. Running trails also seems to be an activity that generally doesn't aggravate it. That held true for today. I hardly felt a pain at all even coming up to miles 30-31. Perhaps the soft sand sections really gave it a reprieve along the way.
For the race today I carried my Ultimate Direction Ultra Vest. I've been using it for several months now and love it. This was my first race with it so I'm still learning how to best maximize all of its little nooks and crannies. I carried two bottles on the front. One was the UD Body Bottle II 500mL and the other was the Osprey 500mL soft flask with straw. I carried most of my food including Gu gels and Honey Stinger chews as well as a bag of fish crackers for salt. I always carry a small roll of TP in my pack on trails "just in case". I also carried a pair of bluetooth earphones if I needed a little boost later in the race. I would indeed use them when I was mostly alone and starting to struggle from mile 22 onward. On trails I only put one of the two earphones in so that I can keep the other ear open to hearing everything.
As in 2017, things started up with a 5:30am bus pickup at the Tahquamenon Upper Falls. The buses loaded quickly and we seemed to hit the road 5 minutes later. I figured we might gear up for an early start. They said 45 minutes to drive out to the start and they weren't kidding. We hit the start line area around 6:20am. Much to our thanksgiving the bugs were not bad at all. In 2017 we were getting eaten alive standing out there, this year not so much. It was low 50s at first which almost felt cool but we welcomed it being pre-race. It took almost 30 minutes for everyone to have a shot at the 4 port-o-potties and to share pre-race information. We did start the race early, but only 7 minutes at that. 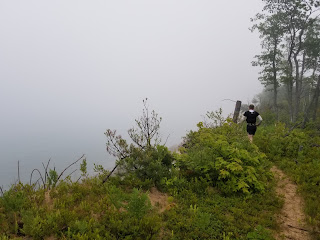 The first 3 miles were on dirt roads. They weren't as firm as you would like. Plenty of soft dirt atop which meant you would frequently be searching for firmer footing for good foot falls. In 2017 I made the mistake of running the early road miles too fast. This year I was hitting about a 9:45 pace and I felt good with that.
Once on the NCT it was a pretty half mile section in the woods til we got to Lake Superior. Unfortunately the clouds were thick and low this day and the views on the lake were limited. This 6 mile stretch to the Two Hearted was still beautiful and at times would be out of the woods and in open spaces. Those were the positives. The downside is there were many stretches of almost pure sand to run in which just isn't any fun. There was even an up and down beach stretch just before the bridge over the Two Hearted. I felt like my pacing and legs were good in here and had a great time talking with other runners.
Past the Two Hearted aid station I was mindful to catch the proper turns in the campground and did. This led to a mix of road and sandy sections for another mile or so until the course began to turn south. The 2 miles or so leading into the Culhane Lake station proved to be beautiful. This was part of the section I missed in 2017 when I missed a turn and ended up on a dirt road to get down to Culhane Lake. I was talking to a gal from the Ann Arbor area through here who also loves training miles at Pinckney. This was her first 50K and she appeared to rock it. 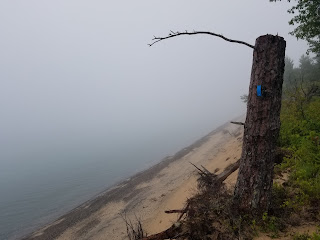 The Culhane Lake aid station was in the campground with a quick run through the campground road. The five miles after the lake were all single track through the woods and fairly uneventful. No big hills just small ups and downs and good flowing single track up to the 414 East aid station.
Coming out of the 414 East Aid Station the course hits over 2 miles of mostly dirt and fire roads making for an opportunity to pick up the pace. I was again targeting just over a 9:45 pace for awhile figuring I could make a little time without overdoing it. After so many forest miles this is a nice reprieve. The one thing that got me was that in here I was beginning to feel some tightness in the quads and it almost seemed like a repetitive motion thing. By the end of the road section I was almost yearning for some up and down single track to break up the strides for my tired legs.
As the trail began to shift back to single track around mile 22 I could feel more trouble brewing with my quads. I was working my best to insure plenty of hydration and I was eating every 30 minutes targeting roughly 250 calories per hour. 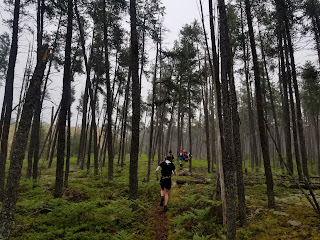 As a side note, I loved my Ultimate direction vest for this race using two bottles on the front of the vest. I had a soft body UD bottle and I bought an Osprey bottle with a straw. The straw bottle was awesome and made drinking so easy. It was my go to for drinking.
Miles 24-29 grew difficult. I was able to mostly keep running but I could tell I had slowed about from running 11:30s to average around 13:00s. Some of that drop was due to more frequent walk breaks. I never had to break down into a long lengthy walk so I was at least able to keep them short to a minute or two. 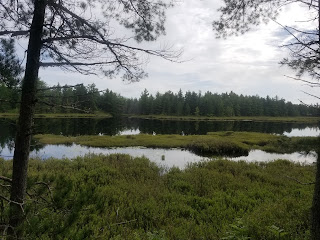 Thankfully the last mile and a half went fairly well. I guess I got one final last wind to move to the finish. Once I got through the muddy sections of the Tahqua Old Pines section I felt good to the highway crossing and then the short bit to the finish. It seemed at one point I was on pace to get into the 5:30s for overall time. Ending up with a 5:41 was still great as it was a 50K PR. Despite the difficult miles at the finish I didn't have to death march it in and I felt like I paced the first half of the race really well. Now to troubleshoot the quads and whether it was a strength issue or possible an endurance issue since I really didn't taper at all heading into this race. I ran a training marathon just a week prior at modest effort.
The Two Hearted 50K didn't disappoint and most of the course is quite beautiful.
Track:
I have a track and waypoints from the hike all contained in the embedded Google Map. Check it out and use at your own risk.