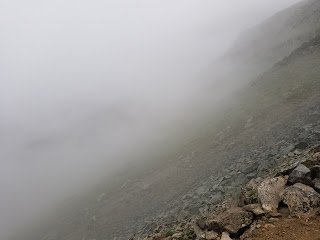 
Trip Report:
I've been eyeing the west slopes route of Columbia for a couple of years now as the Colorado Fourteeners Initiative poured in a ton of resources to build a new trail for this route. I had previously descended the original "trail" in 2010 after completing the Harvard-Columbia traverse with my friend Matt. I can remember the steep and loose nature of the previous trail. It was almost universally disliked by all. So I had great excitement to see the miracle trail work of CFI to update this route.
I was excited today to share the trail with my oldest son Luke. He has become quite the adept hiking partner giving evidence he can handle all the miles and trails I throw at him. I haven't yet taken him up on any class 3 routes but his endurance and his speed are already coming together nicely.
The weather report for today was the big hang up. The morning had a 50% chance of precip and the afternoon was 100%. I had hiked in a similar forecast yesterday and it turned out to be great so we were hopeful today would provide similar fortune. What we saw as we left the house in the 4:30am dark was not promising. There was a mist coming down and it appeared the dark sky was cloud-filled. As we drove up the North Cottonwood road the mist would come and go. At the trailhead we didn't feel anything dropping on us so that at least appeared to be a good sign to start.
We were surprised at the trailhead there weren't more cars. We can only assume the weather forecast kept a number of people home. Part of our reason for our 5am start was to get up there and be able to find parking. We also liked the idea of getting Luke an hour's worth of hiking with headlamps in the dark. We made quick work of the first mile and a half to the junction with the Kroenke Lake trail and then made our right turn heading up to Horn Fork Basin. It was around a former avalanche debris area that the morning light was enough for us to turn off our headlamps. Finally getting a good look at the skies we could see things were very much clouded over and socked in. They weren't t-storms but it was instead a very low cloud deck providing fog almost to ground level.
As we continued onward we debated the possibilities of whether to continue the hike above treeline or whether it was a day to bail. It seemed clear lightning was not going to be a concern. It also seemed likely these weren't full on rain clouds that were going to shower us and drench us. It was just a soupy, low cloud deck that would fog us in and we felt like we could deal with it. The loss of views is always regrettable but we felt after a great week's worth of hiking, we had already taken in our fair share of views. 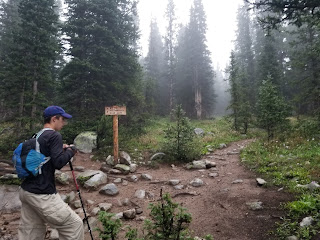 When we reached the junction with the Columbia trail it was well-marked with a sign and hard to miss. It was also easy to follow from the start. It was a quick up-and-over with a ridge in the trees and then soon enters a rock field. It was evident right from here the work put in on the new trail. Rock steps and a clear path were made in this rock field to begin the ascent. The grade of the trail was always a nice comfortable climb, never too steep. It was also evident the effort put in to make this a very sustainable trail. 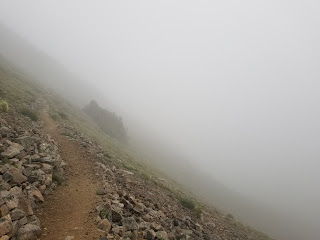 As our ascent took us high and high the clouds around us didn't change one bit. A small part of us held up a long-shot hope that we would somehow climb above the cloud deck as we neared the summit, but that was definitely not in the cards today. The visibility for much of the climb was no more than 50-100 feet. It was enough to see the clear trail ahead but never much more. 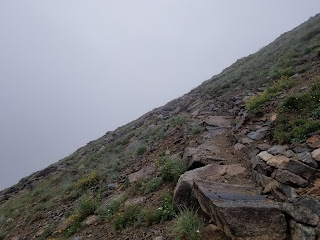 The new trail does not extend all the way to the summit or even the summit ridge. It is around 13,000 feet elevation that the new trail joins us with the remnant of the original trail. The difference is immediately evident. The original trail is braided and steep and hard to follow at times as it ascends through rock and dirt. Much more care was needed to follow it. The near white-out of the day's weather made it all the more difficult as well as we could not see much of what was above us. Aside from looking at our GPS location on my phone, it was difficult to know where on the mountain we were located. It didn't escape our attention that if we were to badly lose the route and my phone would die we would have our hands full. 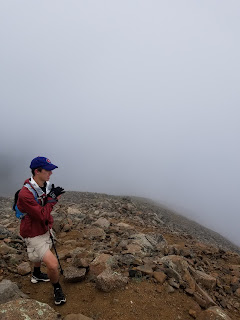 As the trail gains the summit ridge nearing 13,500 elevation it becomes clearer and more of a normal trail. In fact we were delighted to find that the early portion of the summit ridge was quite easy in difficulty. It was almost like a grassy slope. On the other hand we were bummed to see that our views simply were not going to change. We also found that the temps were really dropping for us. Where we had been around 50 for much of the hike they dipped to around 40 with a light breeze. I even donned my rain jacket just to help with warmth on top. Luke threw on some gloves that I had brought along. Our low temp for the day would get down to 37.4 which happened during our descent from the summit. Not bad for the first day of August. 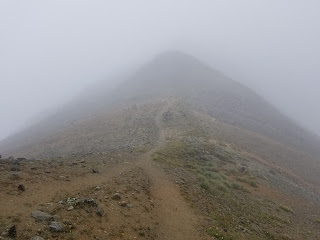 Within a hundred feet of the summit we finally got back into the rocks. The path traverses across a rock slope and then some very light scrambling is needed to make the summit area. We ditched our trekking poles right at the start of this recognizing the easy need of our hands for the remaining terrain. Nothing in here would have exceeded class 2.
We hit the summit at 9:08am which was pretty much right on target. We wanted to be sure to be well on our descent before 11am when the weather was potentially forecasted to further decline. This made for a 4:08 ascent. 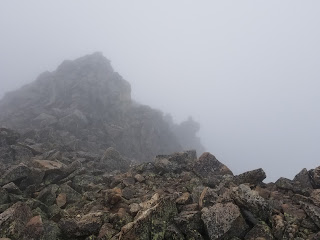 The summit views were non-existent but we were okay with it. We had taken in enough views this week and even seen similar views of Horn Fork Basin while on Harvard a year ago. We spent a good 20 minutes enjoying the summit to ourselves which is very much a rarity on the 14ers these days. We had some cell signal to send of some fun summit photos of ourselves in the clouds. 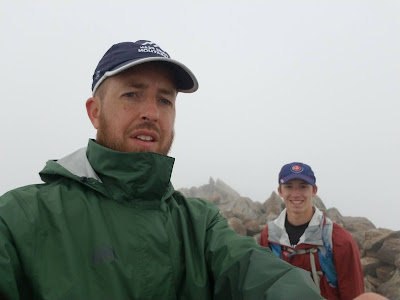 Our descent went smoothly from the top. We took special care to be sure we stayed on route to descent the right part of the west slopes. I had recalled stories from the past of folks trying to descend too early into the wrong gullies. Keeping on the somewhat clear trail along the summit ridge facilitated this nicely. We knew we were on route when we hit 13,500 and the steep descent of the loose dirt familiar from the climb. Descending this stuff is no fun and I told Luke the horror stories of descending the entire west slope on this cruddy stuff before the new CFI trail. Once we hit the new trail again it was pretty much smooth sailing the rest of the way down the trail. 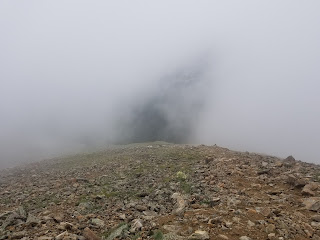 One of the highlights that greeted us along the way was a preponderance of marmots and pikas. In recent years we've been disappointed on a number of peaks at the lack of marmot sightings. Not sure what to attribute this to. Today changed all of that. Not sure if this was because Columbia has a massive population or the cool, cloudy weather just brought them out of their holes to chirp at us. One part of the new trail looks like it has a whole colony right next to the trail as passed almost a half dozen holes in one single spot. If the marmots hadn't been so wild and elusive we'd love to take one home with us as a new friend. 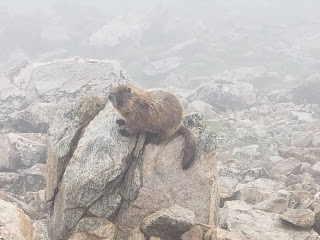 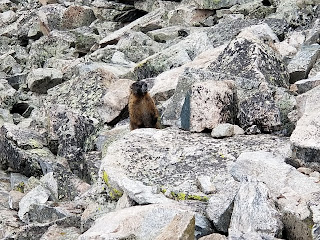 On our whole ascent of the Columbia route we only encountered two other single hikers. One ahead of us, one behind. All who summited did so by 9:30am today. We encountered a few other hikers on the Horn Fork Basin portion of the trail who all seemed to be either backpacking or out for day hikes. We did our best to cruise down the trail and made our full descent in 2:56.