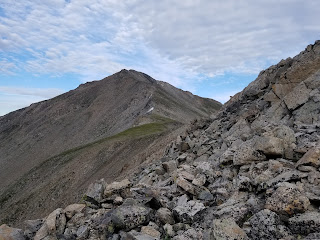 
Trip Report:
For several years now I've been eyeing long and longer routes and link-ups of trails to see how I can handle bigger and bigger days in the mountains. There is a certain joy in looking at a map and being able to cover large amounts of grand especially when you can keep hitting new trail the whole day. This effort was to make a wonderful loop around and including Mount Yale. I've seen others do a similar route only instead of going up and over Yale they do a complete circumnavigation of the peak using the Cottonwood Pass Road and the Avalanche Gulch portion of the CT which I skipped. While I love the aesthetic idea of a complete loop around the peak the thought of going up and over it seemed more enticing for my style.
As I planned the right free day to go for it the only obstacle that would really come up is the weather. The forecast for today was pretty bad. A 50% chance of precip in the morning and a 100% chance starting at 11am. Not ideal, however, we've come to learn that even a bad forecast like this has a reasonable chance of still turning into a bluebird day.
I decided to get an extra early start just to see if I could be below treeline if the weather turned bad. I also decided to hit this loop in a clockwise-direction. No matter which direction I would go the plan was to start at the Silver Creek trailhead of the Colorado Trail. I've hiked up that portion of trail a number of times now and so I had hoped to be descending it this time. But if I were to go counter-clockwise I would be hitting Yale and its East Ridge last and risk hitting that when the weather was going bad. So it was settled, I would head for Yale first and then make the clockwise round to Brown's Pass and Kroenke Lake and down.
I hit the Silver Creek trailhead at 4:44am. It gave me a solid hour in the dark. Its always a bit unsettling hiking solo in the dark in the mountains with the thoughts of bears and mountain lions being about. So I decided to go for a little extra noise today. I like to play podcasts on the speakerphone on my smartphone just to have a few extra voices playing about me. I do this acknowledging playing audio out loud on the trail is normally an interruption and poor form for hiking. But since I was pretty much the only soul in the area I went for it. I did pass a camp around 10,500 so I muted the phone there.
The only person I encountered the whole ascent was a single through-hiker a few minutes from the saddle off Yale's east ridge. I made the saddle in 1:24 which was just 4 minutes off my fastest time. I tried to balance pushing the pace on the ascent yet keeping my heart rate in check with a few short breaks. 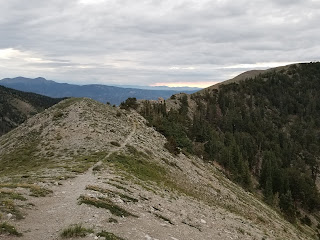 It was fun working on Yale's east ridge again. I didn't research it much ahead of time today hoping to rely on my memories from three years ago. The main gist of the ascent is to stick to the south side of the ridge when in doubt. This would work well. I made it up to 13,000 carefully working through the minor difficulties of the ridge. I remembered a very steep slope right around this area and tried to hit it more at an angle this year to avoid climbing straight up the loose junk. My only major hiccup of the ascent came while working by a hump on the ridge around 13400. I could see the brief saddle coming up as I traversed the hump but before arriving found myself cliffed out with some very difficult class 3 terrain. I could attempt it or I could backtrack. I opted for the backtrack today as there just wasn't much need to take on any risk with today's plans. It was a short detour at least. 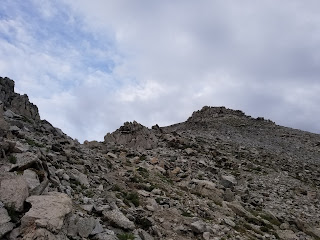 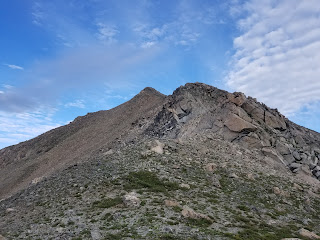 The remaining route was straightforward and without any of the snow I encountered in 2018. As I neared the final summit push I could see quite a handful of people on top already. It was 7:54am when I topped out and perhaps 10 people were already on top. Kudos to all the early risers! I only had one person ask from which direction I had come which is pretty standard when you use an alternate route to the summit. It was a 1:46 ascent of Yale's east ridge from the saddle. I only spent 5 minutes on top to take some photos and send a few messages back home.
On the descent I picked up a pretty good pace especially once hitting the big saddle and off the rocks. I pulled my trekking poles out to aid with the run down and save my quads a bit. There must have been 50 people coming up the upper slopes of Yale as I worked my way down.
When I started the day I had 1.5 L in my running vest and I fully planned on making a few stops to filter more. As I made my descent of Yale that need was coming up fast. I was finishing up the last of my water around treeline and it didn't take long before I found a wonderful creek (I noted it on my map below) to stop at and filter. I was carrying a Sawyer squeeze today and have my system down well that I was able to filter a liter and be back on my way in just under 10 minutes.
I wasn't full-on running on my descent but worked a brisk power-hiking pace with light jogging at times. I'm still working on pushing these limits of what I can do and how fast I can go on these bigger efforts. It was 9:29am when I hit the junction with the Brown's Pass trail. While others continued down from there to the trailhead I made the right turn to head back uphill. Always a strange thing after a big ascent and a summit to now being uphill again for another big uphill.
The first part of this ascent I've been on once before on a winter hike up to Hartenstein Lake. When that junction came and went I would be on my only bit of new trail for the day hiking the remaining trail to Brown's Pass. The early part of it was mostly a forest hike gaining gradually towards the pass. The last 0.6 miles was more in the open traversing through and around patches of willows until eventually gaining the nice open Brown's Pass. It was 10:32am at the Pass and the great news of the day was that the weather still looked good. There were clouds brewing here and there but nothing imminent was showing. For my part I just knew I had to get up and over the Pass and to the descent to Kroenke and I was in the clear for the day. I was impressed how well things had turned out weather-wise. I bumped into a couple of backpackers at the pass and had a nice chit-chat with them. They had been down on the Texas Creek side for a couple of days and were now heading out to the Denny Creek TH.

The newer trail heading up from the Pass makes a couple of big easy switchbacks and then a nice northerly stroll out to what I would call the "Upper Brown's" pass which is where the descent to Kroenke Lake begins. This all was actually quite beautiful up here being able to soak in impressive views to the west and northwest. At the Upper Brown's Pass I made one more satellite communication with the family back at giving an estimated arrival of 1pm for Silver Creek. It was 11:09am and I figured I could do the 7 mile descent in under 1:50. It was a little ambitious but I really wanted to practice a full-on trail run for this descent.
The upper stretches above Kroenke Lake are very rocky and slow partly due to constantly working through willow bushes. When I ascended this a year ago in the late morning it got me drenched from the remaining dew on the leaves. I wasn't really able to start working the pace til I hit Kroenke Lake. I had debated stopping at the Lake for a water refill but was reminded the trail never gets up right next to the Lake. So I waited.
I would work in and out of a jogging stride and a power-hike stride getting a feel for what felt best. It was about a mile and a quarter past Kroenke when I did finally run out of water and hit a nice creek to stop and fill. I only did a half liter here and again practiced getting it done timely. After that final water stop I worked again at keeping a mixed trail-run and power hike stride going using my poles to create some tempo. I started to get a great rhythm on this and ended up doing more and more running. From the moment I hit the junction with the Horn Fork Basin trail I was able to run the remaining trail out to the North Cottonwood TH. I ran that 1.6mi out in just 23 minutes. On the road I picked up the pace even more keeping a solid 10-11 min pace run. Not flying obviously but a pretty good pace for miles 19-20 on the day. I ran the road back down to Silver Creek covering the mile and a half in 18 minutes. It was a 1:03pm finish and the weather was still beautiful. My legs actually felt really well at finish a good sign that I can cover more. While I've certainly covered more miles before this was a nice load especially with the 6700 foot gain and the high elevation heading over a 14er summit. Couple that with legs still feeling reasonable at the end.