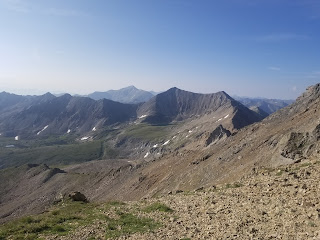 
Trip Report:
As part of our backpacking trip into the high portion of the Pine Creek/Missouri Basin we were looking for further objectives to hike to once we setup a high camp. This morning we hiked up near the junction of the Pine Creek Trail and Elkhead Pass trail and found a good campsite a quarter mile up from the junction. We set things up, had a nice lunch, and then set out to hike up to the lake. The plan was for my father Denny and son Luke to have fun fishing at the lake while I set out for the 13er Mount Magdalene.
The Pine Creek trail was easy to follow from the trailhead up to about a half mile past the junction with Elkhead Pass. It was here that we encountered rocks set across the obvious path and what seemed like a reroute in the making. The picture following shows this stop. There was nothing to be seen to the right. To the left was Pine Creek but no obvious crossing or trail beyond it. We could still see trail ahead of us. I also had a GPX for the Pine Creek trail and it also showed things going straight ahead. We made the executive decision to continue straight.
Not surprisingly the trail eventually petered out. We began to route-find through the willow bushes and grasses. We could see from the map roughly where the "old" trail crossed Pine Creek and we meandered towards that. As we looked to the south over the creek we could begin to see what looked like a clear trail. So we eventually made our way to a crossing over the creek to join the trail on the south side. This trail would eventually lead us to the lake so all worked out.
At just over 12,100 in the basin the trail turns south and begins to ascend a beautiful drainage gully right alongside the creek. Lush grass was on both side along with plentiful wildflowers. It made the roughly 400 foot ascent go by quickly as we soaked in the beauty.
As the trail neared the lake it gained up over a rise that would eventually put us above the lake. When it came into view we realized we were perhaps 50 foot above with a short walk down hill to the shore. It was in here that I bid my father and son adieu so I could begin the climb up Magdalene.
As we ascended towards the lake we could see a traversing trail on the east side of the ridge up to Magdalene so I knew it wouldn't be a complete route-find. There was a bit of steep hiking/climbing to get up from the lake and eventually up to this trail. I guessed a route on a few grassy benches and ledges to gain a flat saddle and a clearer looking at the ascending trail. On my descent later on I would realize there is a makeshift trail to be followed all the way down and I noted this on my map.
The ascending traverse trail on Magdalene eventually led up to a saddle at 13,200. The ascent from the saddle heads up the northeast ridge of Magdalene to the summit. The route became less clear and pretty much disappeared in here. This led into relatively easy class 2 light scrambling to make the rest of the way to the summit. One could probably do this without ever using their hands but as often happens hands are helpful for balance on many step-ups in the rocks. I carefully made my way up through the terrain to the summit soaking in the beautiful views all around. The weather presented zero concerns for us today.

The descent off Magdalene was pretty straightforward back to the saddle and then the trail easy to follow all the way down to its beginning near Silver King Lake. I found my father and son near where I left them at lake's edge where they had enjoy a nice hour plus of fishing. They didn't have any catches but did have a handful of bites.

The only highlight of the hike out to our camp was navigating the "reroute" down in the willows that had given us trouble on the ascent hike. We decided to stay on the trail on the south side as far as it would lead us to see if there was a true route. This path did lead us to an eventual northward turn that would lead us to cross the creek near the original reroute. However, this wasn't without its own challenges. The area was very wet and soggy and not a fully clear path to the creek crossing. We ended up doing a bit of our own route-finding to try and keep our shoes from going completely underwater. After a bit of backtracking we eventually found a path through the muck and across Pine Creek back to the original stop on the trail where the rocks blocked the way. Other than this confusing and messy area the rest of the hiking on the Pine Creek trail from start to finish was a delight. 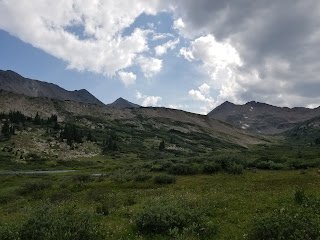