Trip Report:
In researching adventures to get into while backpacking up into Pine Creek/Missouri basin it quickly became evident that several peaks would be within reach in one big push. Two large 13ers, Emerald, and Iowa as well as 14er Missouri all sit next to each other on a long ridge. An early question we dealt with was what this ridge would look like and whether it would get technical. Some research on old trip reports revealed that the ridge was fairly tame and very do-able with our skill set. I was even able to find another individual's GPX track of a route they took to hit these peaks and I had that with me on my phone app as a guide.
Its worth saying right off the bat, this loop is not overly difficult to navigate. Some reasonable mountain sense can get one from mountain peak to mountain peak. The big question is just how circuitous a route you would like or how efficient you would like to travel. The helps I offer below will be with the intention of helping future hikers on this loop make efficient choices in navigating to the top.
We chose to start with Emerald Peak and it did turn out to be the most difficult. While nothing on any of this route exceeds class 2, Emerald's summit area did present the most difficult rock to navigate. The 800 foot final climb on our route to Emerald also proved the steepest and most strenuous section of our hike taking up a good amount of our energy. By comparison, the ridge climbs up Iowa and Missouri from this direction were much less steep and fairly straightforward.
Our morning began with a start just before 7am to hit the trail. With our camp located a quarter mile up trail from the Pine Creek-Elkhead Pass trail junction we surmised that we could bushwhack up the forest slope to shortcut some of the Elkhead Pass trail. On my included map you can see our brief bushwhack route to gain a switchback. The terrain in the middle was very workable and the trees and brush not thick. It was a worthy decision.
Once on the Elkhead Pass Trail we followed it through a few switchbacks and in less than a half mile we hit our exit point. Just before a notable creek crossing we took a west-ward heading which looked like would take us directly toward's Emerald. Early navigation on this route was mostly straightforward just keeping a line towards what appears to be the summit.
The following graphic shows our route through the first navigational object. As you most west towards Emerald you'll see the first slope climb. The GPX track we followed had them going up what I note as the "grassy slope". It is inviting and certain a worthy route. We also could see what I call the "alternate slope" more to the right and wondered if it would ultimately shorten the route. We believe that also a viable choice. We ended up choosing what I call the "break in the rocks". It was a brief and easy climb through a rock gully that put us up to flatter ground and on a good path onward to the summit. 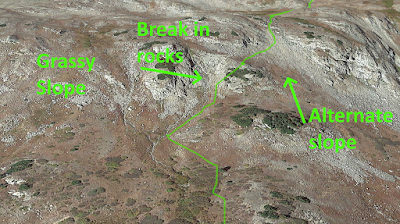 Above the previous picture was a brief flat area.  This also included a patch of willows and a small creek crossing to be navigated amongst the willows.  Without too much fanfare we were able to find a route through without getting our shoes drenched.
The following graphic is going to show the next few sections of the climb and I'll give some explanations on our thinking through each section.  Once again, it wasn't overly difficult and if one keeps heading upwards eventually they can find Emerald's summit.  However as mentioned, we wanted a helpful and efficient route without too much steep rock nonsense. 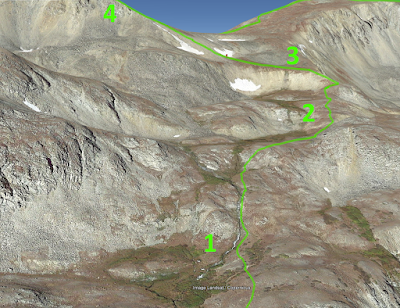 Above the slope with the stream we began to veer slightly right and in this new area [Section 2] we encountered a small pond.  Most maps will show this little pond thought it appears unnamed.  We held to its east side and then before us could see a less steep grassy ridge that looked to be a good path for ascent.  The GPX track we followed seemed to ascend a rocky slope that was straight ahead.  This was all in [Section 3] on my above graphic.  It would seem either route would go depending on how steep you like things to be.
My next photo was taken from roughly between [Section 3] and [Section 4] of the graphic. It was really the last bigger route decision we would make.  If you go to the right it will be a longer circuitous route up to the saddle and eventual ascent of Emerald (left of photo).  The other option is a direct route up the steep and rocky northeast ridge of Emerald.  We chose the latter despite our disdain of its looks.  The longer route via the saddle will still put you into a steep (albeit shorter) ascent of the north slope of Emerald. 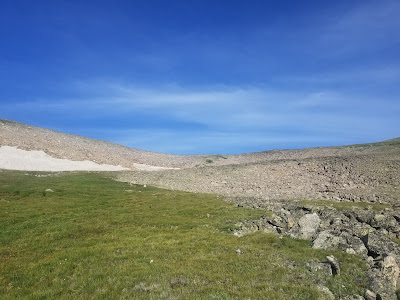 After much grunting and stopping and hard work, not to mention gulping down a few Gu gels, we made it to the summit of Emerald.  While ascending the northeast ridge of Emerald the name of the game is pretty much just keep ascending on whatever path seems best.  There was nothing more than short little trail segments to follow in here.
As much effort as it took to gain Emerald's summit I had a moment's trepidation of whether I wanted to go all the way from Iowa and on to Missouri.  A part of me might have been content with just Iowa.  Yesterday's difficult hike with the heavier backpacks definitely factored in a bit on this decision.  What ultimately changed the game for us was the discovery that the ascent up Iowa, and then later Missouri, would be much less demanding than the Emerald climb.

Not too far from Emerald's summit, during our ascent, we came through a small saddle. We noted for a moment at the time this could likely be a good place to begin the descent towards Iowa.  This would prove to be accurate.  In fact, as we began our descent we would come across a steep and loose dirt path that seemed to lead the whole way off Emerald down to the grassy slopes of the Emerald-Iowa saddle.  While descending this crud isn't always a fun thing to do, having a relatively clear route at least made the mental game a little easier.

After getting off the dirty descent from Emerald the flat grassy saddle was very straightforward and we picked up the speed.  We continued to eye the ascent up Iowa and gathered there was no trail or any clear path.  The main idea would be to just pick a line for the summit and go for it.  None of the Iowa ascent was so steep that it would force us to redirect.  We made a pleasantly quick shot up the south slope of Iowa and were on the summit.  Took 41 minutes summit to summit from Emerald to Iowa.


After spending only 5 minutes on Iowa's summit we start our way over to Missouri.  For the most part we progressed near the summit ridge and made easy work descending from Iowa.  We were eventually led down to a saddle and pleased to see we had only descended to about 13,600.  We looked down the grassy slope to the east and confirmed this would be our descent route back to camp as opposed to retracing our steps over Iowa.  We also decided to drop trekking poles here as it seemed clear we wouldn't need them on Missouri.  One more positive realization we had here was there appeared to be a trail heading up Missouri's south ridge.  We knew others had done this route before and is popular with hikers coming from Elkhead Pass but wishing to avoid Missouri's famously trecherous east ridge.


The ascent up Missouri was very straightforward with the trail and other than a few steep dirt sections was good trail and practically stayed class 1 almost the whole way.  As we neared the summit we had a clear view of the northwest ridge standard route including the crux portion.  The crux on Missouri's standard route includes a steep descent into an even steeper loose dirt traverse.  Its seen in my photo below:

We made Missouri's summit around 10:10am with only a 33 minute crossing from Iowa over.  We saw our first person of the day on the summit.  In fact he would be the only person we'd see all day.  He was a fellow trail runner I gleaned from his wearing a similar Ultimate Direction running vest to my own.  We enjoyed comparing notes and chatting for awhile.  In total we got almost 30 minutes on summit and even had a bit of cell reception to check in with family.

The descent from Missouri was easy back to the lower saddle where we had ditched our trekking poles.  From here we began to make our own route down the steep grassy slope.  There was no trail to speak of so we made our own path.  For the most part we were making a beeline across the open meadows to hit the Elkhead Pass trail.

Most of the "bushwhacking" was navigating a good route avoiding willows and marshy areas and small creek crossings while also not taking on more distance than needed.  The real highlight of this was the extreme beauty of this upper basin.  The view to the south was a constant wall of peaks.  This was an area I would return to in a heartbeat.


Our route-finding over to Elkhead Pass went well and it was very easy to find out in the open.  We made quick work descending it back down towards treeline.  The last remaining obstacle was the creek crossing near where we left the trail in the first place.  We had to look around for a spot to cross and it ended up being 20-30 feet upstream and required a rather large jump from rock to rock to make it dry.  Our crossing is in the following photo:

After the crossing it was the final short bit on the Elkhead Pass trail and then our remaining bushwhack to shortcut back to our campsite.  We made it back to camp to meet my father just afternoon.  Our legs felt great from today's effort after we had recover from the Emerald climb.
Track: