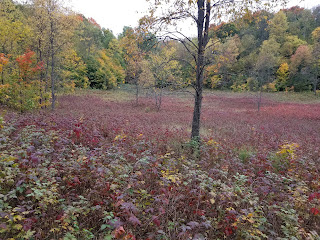 
Trip Report:
I finally made the big loop at Jordan Valley. I first discovered this loop in 2016 and that year I did an out and back of 12 miles on the NCT portion of the trail. I was somewhat time limited and I didn't make it all the way to Pinney Bridge as hoped. In the years since I've explored short sections venturing out from Deadman's Hill but never did things work out to go for the whole loop.

In 2021 I did the entire loop at the Manistee River Trail. I carved out the time in my schedule to devote an entire morning and it was worth it. I loved the big effort and although I rolled my ankle badly on that one, I had a lot of fun. I debated going back to the MRT this year to do it without the ankle roll and long walk out but in the end I decided to put my efforts forth on the JVP.

The weather report for the morning wasn't great. Temps would be fine in the upper 50s but good chances of rain all morning and a full sky of clouds. I brought an ultralight rain jacket along just in case.

I got started just after 8am. No rain yet. The start of this trail is a 330 foot descent from the bluff down to the Jordan River. Its a quick reminder of the climbing you'll do in the latter half. The rest of the first mile hugs the edges of the slope on a narrow trail of ups and downs and occasional mud. The second and third miles are some of the most scenic. The trail stays near the river but wraps around some meadows and passes an overlook with some beautiful views of the area. Miles 4 and 5 continue to pass through some open meadows with views and this area becomes very runnable so I picked up speed. 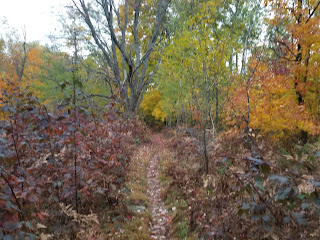 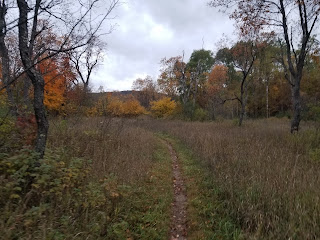 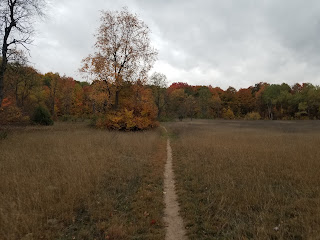 Miles 6 to 9 stay near the river with some parts very runnable and other parts heavily rooted with trees near the river's edge. It was in here that I had made it and turned around in 2016. I was surprised how little of it I had remembered. While some of the early miles are pretty these middle miles were a lot of "tree tunnel" miles as I like to call them. 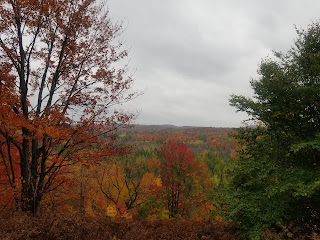 Around halfway I popped out at the Pinney Bridge campground. It was open with not so much tree cover and appeared to have quite a few walk-in sites. The blue blazes were easy to follow through the campground to a dirt road. I followed this road down to Pinney Bridge and shortly thereafter found a stream of water covering the road up to and just past a metal gate blocking vehicle passage. It took some effort to hope from rock to rock and the edge of the road to stay out of the water.

A quick climb after the road helps you leave the low point of the day at the Jordan River and ascend back into the forest. In this section you come to signage highlighting how this is the only place the very lengthy North Country Trail passes the 45th parallel. These miles were fairly runnable but very much caught up in the trees.

After the Cascade Road crossing its just under 2 miles to the Landslide Overlook which is definitely one of the highlights. The views here are quite impressive (by Michigan standards). From the overlook you feel as though you're looking out 10-20 miles. It is also here the North Country Trail departs and it is the JVP.

The remaining miles were mostly ones I had done on a run in 2017 and all tree tunnel miles. As a whole the JVP is deceptively challenging. There are plenty of runnable parts but there are also a number of areas with very thin single track, plenty of roots, ups and downs on small hills and mud, plenty of mud. You cross numerous little bridges over streams and a number of boardwalks which turn slippery at all the unexpected times. Having finally completed the whole loop I am happy now to consider the JVP at the top end of my favorite Michigan long and looped trails.

Track:
I have a track and waypoints from the activity all contained in the embedded Google Map. Check it out and use at your own risk.
Labels: Michigan Running Trip Report
Location: 2X8C+Q7 Green River, MI, USA