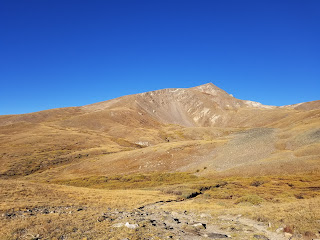 
Trip Report:
When you're looking for an easy summit on your way out to Denver International Airport Square Top Mountain comes up as a great choice. My brother and I were heading from Buena Vista into Denver and our flights weren't until after 5pm. We didn't want to waste the day sitting around and so we decided we should find a morning summit. We wanted something fairly accessible, fairly easy, and predictable timewise. I had first brought up Bierstadt as we had already summited it a few times and knew we could get up and down in a predictable time. My brother wanted something new so we looked on the other side of Guanella Pass for our answer.
Square Top is an entirely class 1 route with just a few steep sections of hiking to note. From Guanella Pass it is a great hike and our day came out to 7 miles RT which is just slightly longer than the normally stated 6.5 miles in most route descriptions.
We parked at the pass just before 8am and being a Monday in September the parking wasn't too full yet thank goodness. The first 1.75mi is all very good trail with a few ups and downs that makes its way toward Square Top Lakes. We already encountered a few dayhikers in this area most of which weren't heading for the full Square Top summit.
At 1.75mi we hit a junction for the lakes and it was signed. A left turn and another 0.4 miles or so led us to another junction, also signed. Straight was a trail heading out into South Park and a hard right went uphill toward Square Top. There was a short, steep climb that led into an easier, not quite flat area. Views toward the summit approach were clearer here. We had expected the trail to fizzle out at some point leaving an open alpine "bushwhack" to the summit. This didn't happen. There was trail all the way up the southeast ridge leading through some beautiful alpine and up to what turned out to be a false summit.
Just as you think you've topped out, you even see a rock shelter there, you look ahead and realize there is a point higher than you just under a half mile out. On many days this would lead to big frustrations and loud grumbles. But the terrain was all quite easy to pass and the views good so we took it all in stride and headed for the true summit.
Square Top has a humongous summit big enough for a football field. It also has humongous views, you feel as though you can see most of the state of Colorado from atop. We could see Longs Peak to the northeast. We could see Pikes Peak to the southeast. We could see most all of the Sawatch Range, even up to Holy Cross. We could see the Tenmile and Mosquito Ranges as well as many of the Elks. I even used my Peakfinder app to figure out we were seeing the northern half of the Sangre de Cristos. Really fun to pick out all the peaks we've known and summitted!
360 Photo from the summit of Square Top
On the way down we picked up some trail run strides in sections and made some quick time down the upper half of the mountain. The last couple of miles we consistently were seeing other hikers and found this was a more popular trail than we had known.
Hiking any portion of Square Top is a worthwhile dayhike. If we return we want to pick up a route we had seen another hiker speaking of. It was a "pass-to-pass" route where they went from Guanella Pass to Loveland Pass hitting Square Top and several other 13ers as well as Grays and Torreys Peaks in between. What a fun day that would be!
Track:
I have a track and waypoints from the activity all contained in the embedded Google Map. Check it out and use at your own risk.
Labels: 13ers Colorado Hiking Trip Report
Location: H6VP+9P Keystone, CO, USA