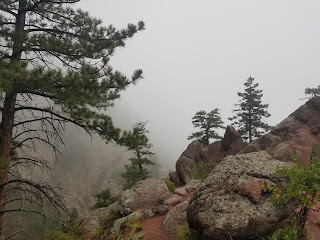 Trip Report:
If you had 4 hours to do any hike in the Boulder area what would you choose? Or expand the question: if you had 4 hours to do any hike in the greater Denver area what do you do? This was my happy dilemna. I had quite a window of time to work with upon flying into Denver about 8 hours before my brother. I even entertained the possibility of driving out to Guanella Pass to do Bierstadt I realized Boulder was a very reasonable drive from DIA so that became top choice. In Boulder, I decided a summit of Green Mountain would really suit my tastes best. I originally decided on doing the west side trail up Green. It was certainly easier and much less steep and I didn't want to risk much with my legs on this first day. 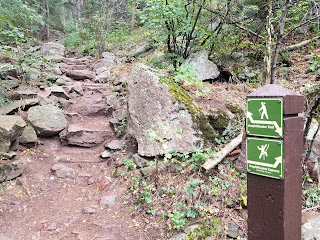 When the day arrived the weather was poor. I drove up to Boulder to see the peaks covered in a low cloud deck. The threat of rain was present as well. Even so, I drove up the Flagstaff Rd to the Green Mountain West TH to find that even the trailhead was in the cloud deck. It wouldn't be a great hike from up there. So I called an audible. I drove back down the road to the Gregory Canyon trailhead. I would try the nice loop hike up Green Mountain that I originally wanted to avoid for its steepness. I hoped it would keep some of the hiking out of the clouds and fog and rain. That hope would not pan out. No views the whole day. 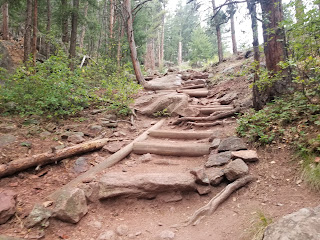 I followed the Amphitheater trail upwards noting the very steep and rocky nature of it. There are several signs along the way marking where there is rock climbing access points. It seems every junction in this area is well marked which is great. About halfway up there is a nice overlook (except for today) where the Saddle Rock Trail and EM Greenman Trails split. The Greenman trail heads to the summit so I followed. All the trails were in great condition and never an issue to follow. The upper section of the mountain seemed a bit less steep.

I summited in 1:25. I sat up top wondering how nice the views could have been. It was also raining lightly so I didn't want to stay too long and get further wet. It was only an 8-minute stay on top til I began down. For the descent I wanted to come down the Ranger Trail. I was supposed to follow the West Ridge trail for a few minutes off summit and then gain the Ranger Trail. Somehow, inexplicably I started down again on the Greenman Trail. After about 10 minutes I realized how familiar things were looking and realized my mistake. I had even seen the signs for both options up top and my brain still didn't sort things out. I certainly didn't want to backtrack up to the summit so I took a plan B. I took the Saddle Rock Trail down to the Ranger Trail when I hit its junction with the Greenman. 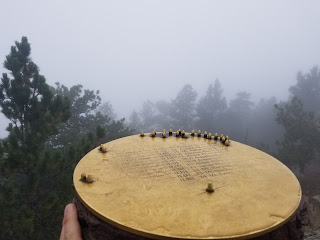 The Saddle Rock Trail, now west of the Greenman was a lovely trail with a nice easy grade to hike. Likewise the Ranger trail felt like a highway compared to the steep rocky nature of my ascent route. I was able to push the pace and make great time. I passed what looked like a cabin that you can rent as I neared the bottom of the Ranger Trail. This ends near Flagstaff Road and from that junction I followed the Gregory Canyon trail out. This trail would likewise have had some fun views had things not been in such a white out.

In all I enjoyed my brief exploration of the Boulder trails and was rather impressed with how much things are cared for and loved. I can see why locals absolutely love the wealth of trails at their disposal for workouts and pleasure. 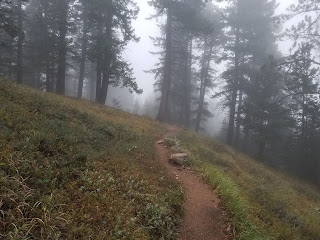 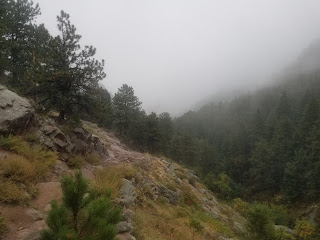 Track:
I have a track and waypoints from the activity all contained in the embedded Google Map. Check it out and use at your own risk.
Labels: Colorado Hiking Trip Report