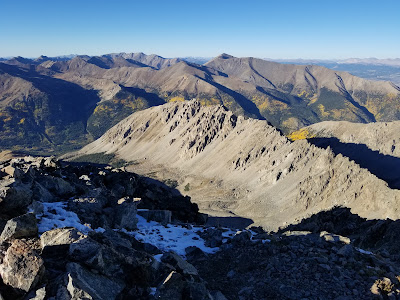 
Trip Report:
Both the blessing and the curse of this ridge is that you have to make it. There's no turning back. It is quite possibly the most committing route in all the state of Colorado. There is no escape.

My brother and I had been eyeing this route for years. I had even started a KML map plotting out key points along the way about 4 years ago. The window finally opened for us to give it a try here in 2022. We loved the idea of attempting this route in September as the mountain weather is much more stable and the odds of a full day of sun and clear skies were high. Getting caught in a storm or rushing your route because of looming weather are bad ideas. We also looked forward to the prospect of hiking with the aspens in full bloom and adding to the already wonderful beauty of the mountains.

We did a massive amount of research and preparation for this route. We read almost every trip report we could find on 14ers.com. We watched a number of YouTube videos especially enjoying VirtualSherpa's video. We spent time plotting possible waypoints in my BackCountry navigator app on my phone based on the knowledge we had gained hoping to understand where the major problem points were. We also plotted a handful of GPX tracks from other climbers in my app so we could see what others did. Special compliments to "alexhenes" on 14ers.com for his GPX track. These other tracks, especially the most detailed ones, were especially helpful as you could see almost exactly where they encountered trouble and were looking back and forth, even backtracking, to find the best passage. Though one can never 100% rely on these, in *most* places we found this to be helpful. We did encounter one moment where it seemed our GPS was tracking poorly and we seemed to be all over the place and that moment was illustrative of why this is not a fully reliable method or replacement for other route-finding and mountain knowledge.

We were also fully aware of a rescue that had just occurred on the Ellingwood Ridge about 2 weeks prior involving a group that cliffed out. We knew our decision making had to be top notch so as not to place ourselves into a situation we couldn't reverse or self-rescue. It was our goal for this day to use all our skills and knowledge to keep ourselves always in the best position to both succeed and to do so as safely as possible. We each have plenty of motivations to make it home at the end of the day.

We opted for a start shortly after 7am. This was partly due to the fact that we had just put up 13 miles and 7200 feet of climbing in the Tenmile the day before (see trip report) and a full night's sleep and rest were going to be helpful. We also felt confident in the near perfect weather forecast and felt we would be fine hiking late into the day. The final thought was having to do with not covering much terrain in the dark. This would prove to be a wise choice for us.

Gearwise I was using my Osprey Stratos 24 daypack. I had a solid amount of food for the day and carried 2L water, 1L Gatorade, 1L Tailwind. We certainly brought our helmets and also had climbing gloves to protect the hands on the rock. We each had headlamps with full charges knowing we would very likely be hiking out some of the standard route in the dark. We also had other basic necessities typical on a 14er hike. For shoes I wore my old Salomon Speedcross 3 trail-runners. While they are a fine shoe when new, mine had almost 600 miles on them and the treads were worn and I even had a hole by a pinkie toe. Big mistake on my part. The worn treads would cost me effort today as I had traction concerns in several places.

On a cool late September Saturday morning we found the parking lot full at 7:10am. We had to park in front of another vehicle along CO82. We walked up the dirt road to the actual trailhead and then hiked in the first mile of the main La Plata trail to the junction in my photo. It is a fairly evident junction, and happens as the main trail begins to take a hard turn to the right (south).

For the most part the Ellingwood trail is present and easy to follow though it is much thinner than the main La Plata trail. It was worth paying close attention to it. It was also helpful to do it in daylight. Route descriptions describe your next major turn being after the next creek crossing and this is spot on. A quick and hard right turn after the creek puts you on a still fairly recognizable trail. After this turn the name of the game is to stick to a soon developing ridge line in the trees. You can see it on basic topo maps. Somehow we lost it temporarily after about a quarter mile. We found ourselves in the low dip between ridges and dealing with massive amounts of tree deadfall. If you encounter this you're off route. We eventually made our way back to the ridge and continued upward. Its steep and there's no switchbacking so its quite the workout. My next photo shows the kind of ridge work you should be doing and you'll know you're on route. 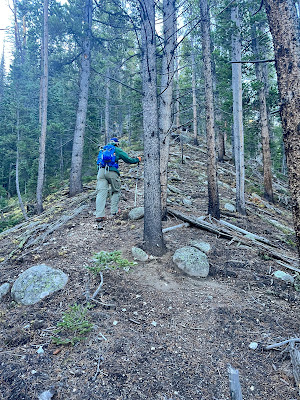 Eventually that steep climbing will spit you out into a rocky opening at treeline. The trail will end in a massive boulderfield and your day on Ellingwood Ridge will really begin. This might be one of those "go or no go" places with the weather. My next photo shows some of this next view and for the most part you're going to target climbing that "peak" which looms above you. Of course this is a false summit and you'll have plenty of climbing to go before you reach any sort of top. As you scout out possible ascent routes you'll see a rocky cliff band and you'll also notice a dirty gully off to the left. With a careful eye, you can spot that gully line running up the left side of the picture. Based on what we observed first hand and based on several other GPX tracks we followed, this seems to be the route almost everyone takes.
The gully itself was very steep and as advertised. If you want to avoid the dirt there is rock on each side and you could probably do some class 3 scrambling as an alternate. We hugged the sides of the gully to get as much stable terrain as possible to ascend. Around 12100 the gully fans out into more of a steep rock slope that just continues upward. Directionally you pretty much just keep heading up while perhaps veering to the right ever so slightly. Your reward and saving grace is behind you the views continue to get more and more beautiful.
The panorama is looking to the northwest from Ellingwood Ridge's first slope. What a treat to see the aspens in full bloom. The large peak immediately across and right of center is Lackawanna.

It was around 12600 that we were finally rewarded with a respite from climbing. We stopped about 5 minutes to take in the views and rest before more work ahead. From this point until you hit 13000 on the ridge is easy, grassy, ridge running and pretty much the only easy part of the ridge. Enjoy it while it lasts because you won't get a rest again until you hit La Plata's summit.

It is quite evident when the difficulties begin on the Ellingwood ridge. Two gendarmes get you warmed up and going with your route finding for the rest of the way. You'll very quickly get to know the name of the game: knowing when you can stay ridge crest, and knowing when you need to bypass. You would easily lose track of how many gendarmes and towers you could climb up the front side only to find the backside cliffs you out. If you're into climbing class 4 and 5 with high exposure you can do more of the these cliffs and stay ridge crest. We aren't that kind of party.
The thing one must really watch out for, especially if your climbing skills are middle-of-the-road like ours were, is getting trapped. Climbing up into an area where you get cliffed out and then not being able to downclimb or escape your predicament. We were ever mindful of this and it led to extra careful decision making.
As I describe our route along the rest of the ridge it will be nearly impossible to describe every maneuver and every obstacle encountered. What I've done in place of this is to create a photo journey to highlight some of the steps along the way and what happened to us. I would encourage you to have a look at the Google Map I've embedded below. On it you'll find two critical features. Our track is very detailed and you can see the places where we backtracked and bypassed features on the ridge. I've also plotted on the map all of the next 18 photos I'm sharing so you can see almost exactly where they are encountered along the ridge. I've used timestamping from the track and the photo to get the locations as precise as possible.
You can see from our map that after taking Photo 001 and bypassing these first two gendarmes we very quickly got stopped on the ridge crest, backtracked and bypassed alongside a tower. As that was happening we took Photo 002. Our bypass took us below a feature many call the "leap of faith". Its roughly a 5 foot gap with a 20 foot drop. Many parties skip this as we did. Our photo 002 shows what it looks like from below.
Shortly after passing the leap of faith we had another very evident cliff ahead and so we were working another bypass off the ridge. We were surprised how steep the east side of the ridge was. It was the less technical side most of the time but the dirt and scree on the slopes was so steep you could never let down your guard.
Neither of us wanted to say it, and we didn't even bring it up til several hours later, but we were both surprised how quickly and how much difficulty we faced this early on the ridge. We must have mutually felt it a bad omen to say something before facing what were supposed to be the crux difficulties to come. This only adds to the lore of Ellingwood Ridge and its famed challenge for all climbers. 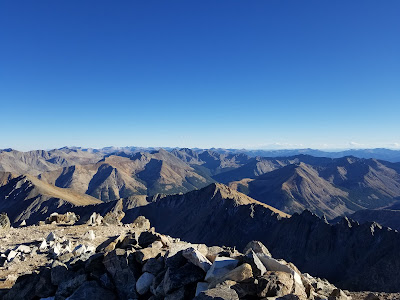 360 Photo from La Plata Peak's summit
We spent about 15 minutes enjoying our hard earned summit and knowing the clock was ticking with the daylight. We kept up a pretty good pace on the upper stretches of the mountain working with a goal to hit treeline before having to turn on the headlamps. We still took time to grab some photos and enjoy the views along the way.
We finally turned on headlamps around 7:15pm when we were starting through the meadows in treeline. It was a nice cathartic descent on the rest of the hike out through the trees. We had face up to some near dead-ends in a couple of places on the ascent and had to bypass several obstacles beyond our comfort zone but with some great perseverance we made it and what a joyous day it turned out to be.

Track:
I have a track and waypoints from the activity all contained in the embedded Google Map. Check it out and use at your own risk.
Labels: 14ers Colorado Hiking Trip Report
Location: 2GMM+37 Winfield, CO, USA