From July 31 to August 4, 2000 we were on a wonderful backpacking trip in the Holy Cross Wilderness. Our main stopping point was the Seven Sisters Lakes and then of course, Mt. of the Holy Cross. We hiked Holy Cross in the very middle of this trip on August 2.

We had been camping amongst the middle of the Seven Sisters Lakes. On the afternoon of August 1 we hiked to the Upper Lake and started to scout how to gain Holy Cross Ridge. We decided that it was possible to ascend (and descend) the relatively steep scree slopes in the bowl above the upper Seven Sister Lake.
The morning of August 2 we set out from camp at 6:30am and ascended to the upper Lake and started the uncharted climb up the scree slope. The scree was loose and with every step taken it was easy to slide back half of it. The climb was just over 1000 feet and it put us at 13400 when we reached the ridge. On the ridge it was mostly talus for us to climb around. Our first obstacle was traversing the east side of Holy Cross Ridge (13,831). Past HCR we had great views at the Tuhare Lakes below us. And past the bowl with the Tuhare Lakes we hit Mt. of the Holy Cross. Clouds were coming and going this morning but we never felt the weather went bad on us. This was our first 14er going off the standard route and actually bushwacking (if you can call it that on scree and talus) our own route. We summited at noon and spent just over 20 minutes on top.
After summiting Holy Cross our work was only half done. It was plenty of work to move through the talus to get back to our descent point. And when we had reached our descent point above the Seven Sisters Lakes we reached what was possibly the most difficult part of the hike: descending the scree. We learned on the fly many new techniques for descending loose scree. Sometimes it was like glissading on snow. Sometimes it was like taking large hops and letting our feet slide in the moving rock and dirt. We found what worked best was to try and posthole our feet into the scree and letting them slide a foot or two into the next step. This went well and we had a good descent back to our basecamp at the Lakes. We were back to camp at 5pm.

I did not have a track of my own for this hike. And because we made our own custom route up Holy Cross there are no standard tracks for this hike. So I have included an estimation of our track which I created on Google Earth:

I have many photos from the whole backpacking trip. Here in this set I am including only those that pertained to our hike up Holy Cross: 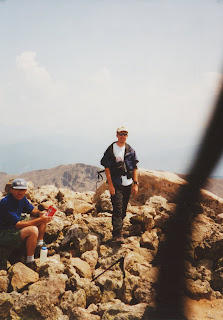 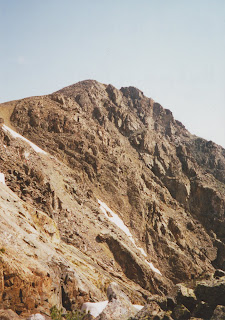 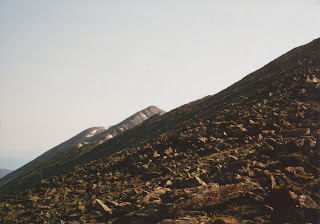 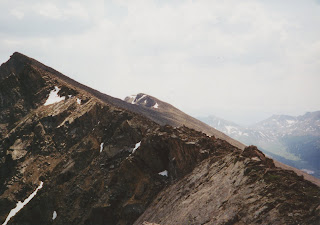 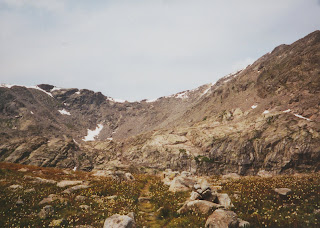 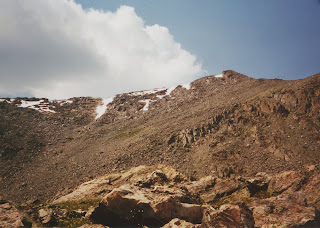 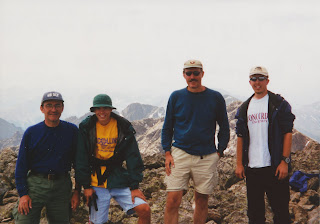 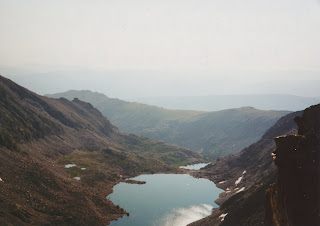