We were up before 5am this morning with the hopes of hitting the Broken Hand Pass trail shortly after 5. We almost accomplished it, we were on the trail by 5:15am on our way up Broken Hand Pass again. It was cold and dark for the first 25 minutes or so. We did finally get some light before we hit the snowfields. They were hard and icy this morning. We crossed the two main snowfields well and then reached the steep snow climb into the pass. This was noticeably melted since Thursday and we were able to hit rocks easier for the second half of it after leaving the snow. The rest of the climb up the pass was familiar. Heading down the southwest side of the pass was all good trail. It was quite steep in parts but remained an easy to follow this trail. This took us down towards Cottonwood Lake for a beautiful, quiet early morning where there was still even some frost on the ground. We followed good trail, some of which was merely flat rocks through the grass around the small ridge that sticks out from Crestone Needle to our first views of Crestone Peak and its Red Gully.


We stopped at a major rock cairn in the middle of the bowl before the Red Gully to scope out the route and gear up. The climb up into the bowl and onto a grass shelf leading into the gully was well-cairned. This route takes you a hundred or two feet up around the bottom of the gully to an easier entry point that skips the very steep bottom part of the gully.

The entrance to the red gully involved crossing a large stream of water on the right-hand side of the gully and ascending steeply for a brief period to reach a point where you can cross over to the left-hand side for better terrain. We were amazed at how steep the initial climbing was in the red gully, and for the most part, it remained this steep for the first few hundred feet we climbed. About a hundred feet up we ran into a stretch where there was a fairly steep snow field on the right hand side of the gully with a very steep notch to climb out of at the end, and the left hand side of the gully was flat, smooth, red rock to climb up through an exposed section. Denny went the left-hand route while David and I went the right-hand route which involved kick-stepping up through the snow with crampons.

Above this section was steep climbing and route-finding and another small snow-field crossing with crampons. This was followed by more steep climbing and route-finding to a point where it appeared as though the gully would get less steep for a period, only it was also completely snow-filled from this point up. We found ourselves on the left-hand side of the gully with a steep pitch to climb before the snow. Two other climbers we met were on the right-hand side of the gully also trying to gain the snow and cross it at this point. David started out with crampons and climbed the snow a bit while we waited and watched.

At this same time the other two climbers began crossing the snow patch. One went first with both their ice axes and traversed fine. He then tried to return one of the ice axes to his partner and trouble began. They couldn't figure out how to do this properly and eventually decided on tossing the ax about 10 feet. Well in the toss the axe was dropped and careened several hundred feet down the gully. Luckily nobody was hit. These two men eventually gave up on the crossing and sat for a while now watching us. The three of us debated for a good 10 minutes what to do having seen the amount of steep snow ahead of us, and we decided to throw in the towel for the day. We weren't ready or comfortable for that much snow climbing and descending.

The other pair turned around as we did also. We feared the steep climbing out of the gully but found it wasn't as bad as we thought on the way down. We all descended through the section with the polished red rock rather than going through the lower snow patch. And we made our way down and out of the Red Gully with no problems. We gained the trail heading out of the bowl and started to make our way back to Broken Hand Pass quite disappointed, but relieved to be off the mountain. We passed the other pair of climbers by Cottonwood Lake where they had stopped to take a nap in a beautiful spot. We were at least blessed with beautiful sun and views of the wildflowers on our way out.

When we hit the snow on the descent of Broken Hand Pass it was melted even further and very soft. We made our crossings with ease though we used the crampons for more practice. We made it back to camp around 1pm and rested. We slowly started to pack up our gear and by 3:30pm we were on the trail heading out of South Colony Lakes. It was an odd experience having not summited for the first time ever.

We made it back to the jeep after the long hike with what felt like extra-heavy backpacks and were on the road by 4:50pm. It was another bumpy ride down the South Colony Lakes road with a few scrapes on the bottom of the jeep. We headed out to Westcliffe and got some food at Poag Mahone's, an Irish pub we ate at a few years ago after backpacking. Those burgers never tasted so good! Mmmm, and the beer, ah yea.

For reasons I cannot remember, I have no track file from this hike. Thus finding out exactly where we stopped is a great difficulty. Using the pictures I have and looking at the maps I've approximated where the snow forced around turn-around. I edited the GPX track from my 2009 hike of Crestone Peak to give an idea of what the 2008 track should have looked like. Here it is embedded in Google Maps:

Here are the 11 photos I took from this hike. Take note of the one of us looking up ahead and massive snowfields. That was our turn-around point. The caption notes however, it was much steeper than it looks: 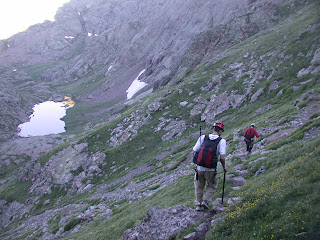 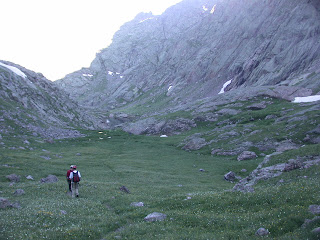 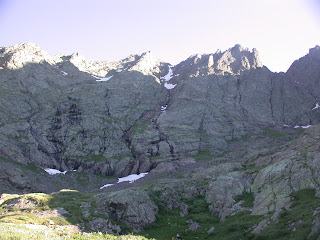 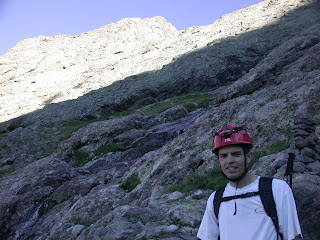 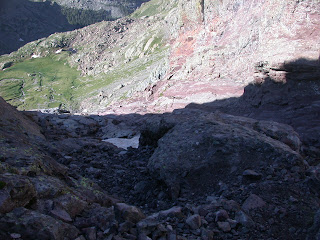 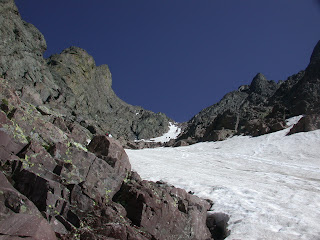 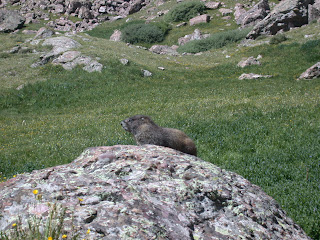 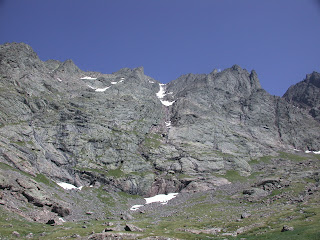 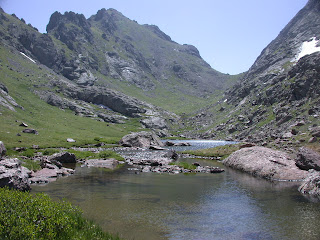 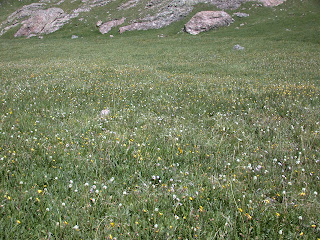