We were up today at a very dark 5am. I was greeted at that early hour with full moonlight and a silhouette of Crestone Needle. We got up and had our headlamps a-goin' and got our food and packs quickly ready. It was cold! We were on the Needle trail by 5:30am and not too long after were able to turn off the headlamps. Sunrise was 5:45-ish. We had to traverse two major snowfields on our way up to Broken Hand Pass. These were a bit daunting at first as the slope was steep and a fall on the hard snow could send you down quickly to the rocks. We used our axes and very slowly crossed the snow. After surviving these first two fields the fun wasn't over. There was an even steeper climb in the snow and ice to get up into Broken Hand Pass. There were two rock fingers sticking out in the middle of the lower part of the pass. Below them was all snow (thankfully above them was all dirt and grass.) We tried out our crampons for the first time in ascending this snow and it actually went rather well. Above the snow the pass was a steep climb for parts and then good steep trail for the latter parts. The pass itself at the top was very windy.

From the pass it was a good hike along the ridge over to the Needle. There were a few easy ups and downs along the ridge until its very end. We'd read about a steep 70 foot downclimb and they were right. The beginning of this downclimb to reach the Needle's East Gully was the crux. It involved doing a moderately exposed horizontal climb on firm rock for about 15 feet and then dropping down over an opening to a large rock. This drop down was over a 3 foot opening with a good 15 foot drop below it. We all made these maneuvers fine and from there it was a steep dirt descent for another 50 or so feet. This puts you at the entrance to the Needle's East Gully. What a sight!

We'd done extensive reading on this hike via route descriptions and trip reports and so much of what was to come looked very familiar from the pictures. The first 300 feet of climbing up the East Gully was enjoyable. Our route finding went well and we kept the climbing to a moderate and even enjoyable level. About 300 feet up when the elevation is around 13,600 feet is when you crossover from the east gully to the west gully. At this point and beyond the east gully gets very steep. The right hand side of the gully turned into a noticeably steeper rock face to climb. The narrower left-hand side of the gully was a dihedral. To the climber's upper-left could be seen the route for the crossover to the west gully. This involved a very steep climb up a rock rib separating the gullies and then a shorter descent into the west gully. There was an exposed maneuver to get across the lower opening of the dihedral and onto the rock rib. And then once on the rock rib it was a very steep, not too far from vertical climb up the rib to its top. At the top of the rib was a rock pile that noticeably looks like a shark's tooth. The descent into the west gully involved a very steep 10 foot downclimb onto a rock ledge and then following that rock ledge 20 or so feet into the west gully.

The west gully was good climbing and we followed it for what seemed like 100 feet to where the gully seemed to split. The route to the left looked like standard gully while the route to the right quickly led to an opening. David thought he saw a cairn up to the right and we followed him on it. That route took us to where the gully opens up and seems to connect with the upper east gully. Our route finding began to fall apart a little after this point. We climbed through steep terrain up to a point where two more narrow gullies remained to reach the summit ridge. The one on the left was very steep but dry. The one on the right was slightly less steep but filled with snow and ice. We made our way up the gully on the right finding our way around the snow and this eventually took us to the summit ridge. This was a careful but easy walk over some rocks to the summit. Wow!
We spent a good 20 mins on the summit taking pictures, enjoying paradise, and making our phone calls. The downclimb went much better than expected. We were certainly a bit nervous about descending all of this very steep terrain. David and Denny descending the same snow gully from the top while I and another guy with us named Josh, descended the steeper, dryer gully. Both descents went well and in about the same time. We found our route well to the west gully once more and descended it with ease. We carefully made our way out of the west gully and onto the crossover rock rib once more. I led the way down the very steep descent to the east gully, just barely being able to face outward as he did so. The maneuvers to traverse the bottom of the dihedral back to the east gully took some long reaches but we all made it.

Descending out of the east gully provided us with one more route finding challenge. We found an exit from the gully to the east which we thought was the trail. We quickly found out as all our options that way cliffed out that we'd left the east gully too quickly. We hopped back in the gully and descended another 100 feet and finally found the proper route. We all carefully climbed back onto the Broken Hand ridge and made the somewhat exposed maneuevers at the downclimb area and that was it. We made a good hike back to Broken Hand Pass and once more descended out of there. We reached the steep upper snowfield and put our crampons on once more. Denny led the way and I was video-taping and suddenly Denny got his crampons tangled and he slipped. He slid a good 15 feet and had to self-arrest with his ice axe, which he did well. Amazingly we caught it all on video.

After this we all took an extra bit of carefulness in our snow maneuvering with the crampons and descended safely out of the snow and onto the remainder of the Needle trail. When we got back to the lakes we were greeted by the herd of bighorn sheep wandering around. What a hike!

I took a GPX track file from this hike. Upon first investigation of the file I found there were several sections with trail points all over the place because the narrow gullies we hiked in killed the GPS reception. I've used a GPX editor to "clean up" some of these areas by dropping points that were out of bounds. This has left a few small gaps in time between points. This track is of our ascent route.

My photos from this epic climb are all included below: 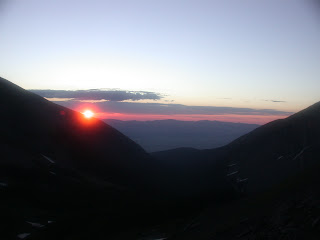 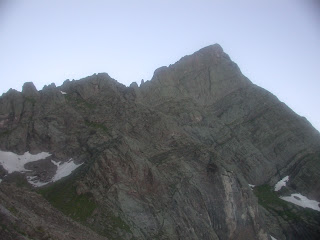 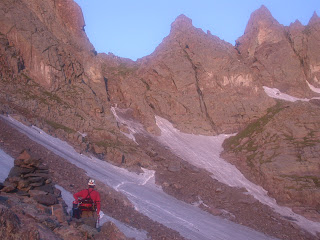 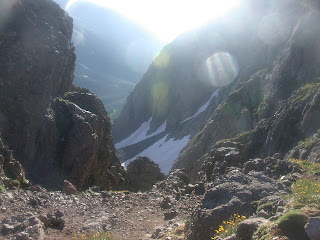 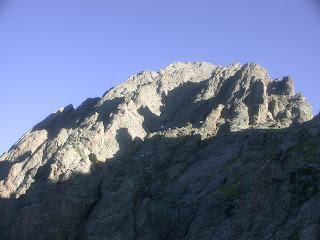 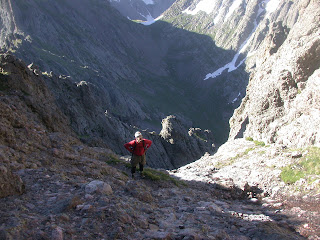 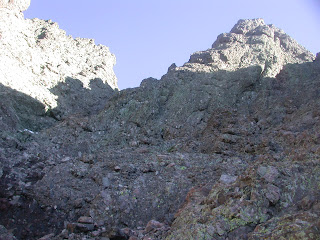 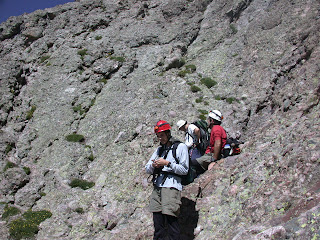 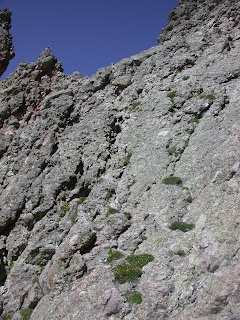 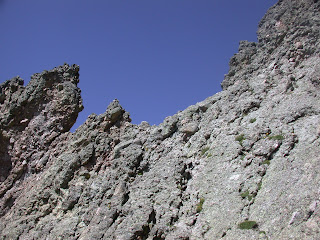 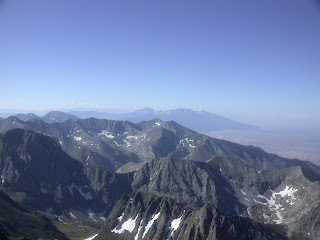 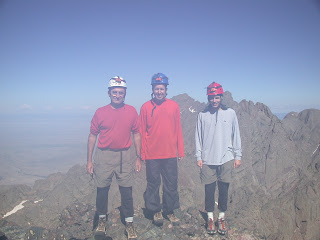 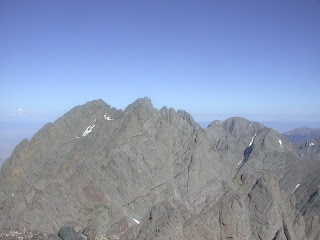 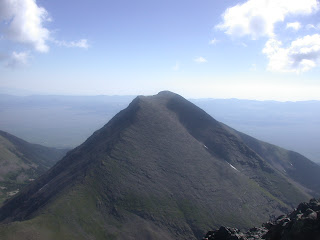 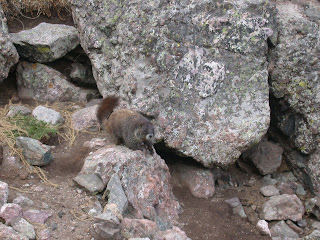 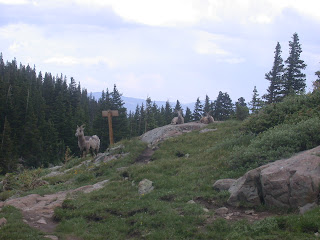