Kit Carson and Challenger lived up to the namesake of the latter. We'd read quite a few trip reports and were aware of the distance, the elevation, and the intricacies of the Avenue. What we never fully understood is just how long a hike it is, first up to Willow Lake (with 40 lb. packs), and then up the 2000+ feet of Challenger's slopes.

No rain. But thick clouds were rolling through the skies above us the entire hike. On our way up Challenger we couldn't see but more than 100-200 feet ahead of us. This also aided in our underestimating the length of Challenger. While on top of both summits our visibility was < 100 feet. It wasn't until our descent from Challenger that the skies started to open enough for us to see some peaks. We had some concerns of being "whited out" or rained up, but thankfully neither ever became a problem. Only issue we had was having no visibility for photos on top of Kit Carson.

This seems to be a growing trend and perhaps worth mentioning. Ran into perhaps 12 people today, 8 of which were in a group which was camped along the trail to Willow Lake. Interesting stories though. About 5:30am as we were about to ascend Challenger we ran into a guy coming down. Of course we asked first if he had already summited. And his reply was "no, actually, I spent the night up on Challenger." This guy got caught in the dark up on Challenger (presumably hiking way too late in the day) and couldn't find his way down. He was trying to use a Blackberry's screen brightness to find his way around up there but the cliffs kept him from going far. God bless you friend for making it down alive, you are a fortunate soul. We also ran into another gentleman who had missed the turn to ascend up the backside of Kit and instead went almost the whole distance to Columbia. He had to ascend over a difficult rock rib to get into the easier gully ascending to Kit's summit.

No snow to cross from Willow Lake up to Kit's summit. The Avenue is free and clear and a joy. The only snow to speak of is a snow-filled gully on the upper half of Challenger. The standard route however ascends just to the climber's right and so you never need enter it. The trail up Challenger is a bit difficult to find at times but if you follow the route descriptions and know about where you're supposed to end up on the ridge, it isn't a bad climb. Challenger's summit ridge is basically a scramble. The Avenue on Kit is a joy and an ease to follow. The final ascent up Kit was also without a basic route but still an easy ascent to pick your own route if you're know about where to end up at.

If you would like to see all my photos from this hike you can click the photo below and it links to my Google Photo Album: 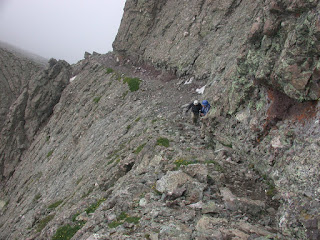