In 2008, David, Denny (Dad) and I made an attempt on Crestone Peak and ended up turning around. We found the snow in the upper gully, which was quite expansive, to be a little out of our desired range of hiking.

Skip forward to 2009. We're two weeks later in the summer, in a light snow winter, and the red gully is getting near empty of snow. Of course this meant driving that accursed road up to South Colony Lakes again. Last year we had a Jeep Wrangler and did pretty well on the road. This year we drove a Dodge Durango. We *thought* that thing had ground clearance, well not on the South Colony Road. We probably scraped 7 or 8 big rocks on the way up. Thankfully at least we were able to get up this road one more time before they closed the upper half down.

Anyways, on to the peak.

No rain. Actually it was near perfect weather this day. The peak and the needle were both clouded for awhile in the morning, although it was one of those deals where there were small clouds only over these two peaks and nowhere else in the sky. Thankfully by the time we reached the top of the red gully the clouds had disappeared entirely.

Ran into 6 or 7 groups of 2-4 hikers. It wasn't enough to feel all that crowded on the hike and yet enough to have some decent people to talk to. We did had one near incident on our climb with falling rocks. We were about half-way up the red gully when we heard that nasty four-letter word shouted "ROCK!" I look up and I see a basketball-sized rock gaining speed, hitting another rock and exploding into four still-large pieces and duck and covered to my left a few feet as one of those large pieces whizzed past my head. Whoa.

The snow was all passable on the way up. The snow lower in the gully is very easy to pass around. The larger and upper snowfield was slightly trickier. We passed around it to the climber's left on the way up by hugging the rocks. This was easy till the very top of the snowfield where it took a few difficult maneuvers to get up out of the crack between snow and rock and onto a flat area to proceed the climb. On our descent of the gully we were less inclined to make those difficult maneuvers to descend around the snowfield on the side in which we had ascended. So we went left (as you're looking down the gully) around the upper snowfield. This takes you down a steep gully around the field, but one we could still descend facing out from the mountain. All in all it was a fun climb. One needs to be very aware of letting loose any of the rock in the upper gully as there is much to be loosed. While this is a very difficult climb, we found it very do-able for one who takes his time and is very careful and meticulous with holds. There are difficult sections to climb but there are also flat respite areas to catch your breath before proceeding.

For anyone who is curious about the length of this hike, I would consider ourselves average to just below average speed hikers. It took us 4hrs 50 mins to summit Crestone Peak from the lower South Colony Lake and 4hrs 40 mins to descend the Peak back to the lower South Colony lake. Let me tell you, its a long not-so-fun climb back over Broken Hand Pass after having climbed the Peak.

I have two GPX track files from this climb. Each shows our route from our camp at South Colony Lakes to the summit of Crestone Peak. I put them into a KML file for download.

If you would like to see all my photos from this hike you can click the photo below and it will link to my Google Photos Album: 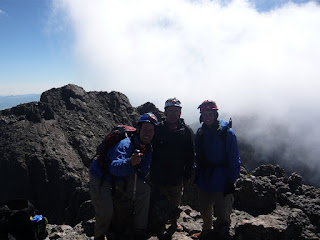