This was the day we were supposed to hike Humboldt Peak down in the Sangre de Cristo range. Yesterday we had hiked Mt. Sherman and had a fantastic day on it, despite the cold and the wind. Factors played against us though and after waking up at 3:30am to get ready for the drive we made the decision to bail on Humboldt. We spent the better part of an hour trying to find a good alternative to do on the snowshoes that would still provide us a challenge. At that point in the morning it was not meant to be; we went back to bed.
At 7:30am we woke up and gave the planning another shot. Finally the answer came to us: Hoosier Pass. Despite the lacking of snow around our home base near Trout Creek Pass we figured Hoosier Pass would be doing well. We also knew the snowshoeing from there would be challenging as we could climb up ridges either to the east or the west. I found a track from someone who had done the east ridge up a thousand feet and then looped home and this enticed us. Then I realized that to the west was North Star Mountain, a prominent 13er. We decided to head west to enjoy it, and if conditions worked out, perhaps even make an attempt on North Star
We made it up to Hoosier Pass just before 10am and boy we were surprised to find it snowing hard with plenty of snow already on the ground. Snowshoes need? Check. While the snow conditions were fantastic with almost a foot of new powder, the cloud deck was low and it was full making visibility to nearby peaks and beautiful vistas non-existent.
Out of the parking lot at Hoosier Pass we used the MyTopo maps on my Droid to find the old mining road heading west. Out of the parking lot it was quite evident from the clearing of the trees where to head. We were immediately impressed with the amount of snow. As the road veered south around the tip of the ridge the drifts were even deeper. The road began to wind along the south side of the ridge and in here the amounts of snow began to vary greatly. In the beginning mile or so the snow was roughly a foot or more deep. As we ascended higher, and the winds grew stronger, the outer part of the road was often wind-blown of snow while the inner portion still held a foot with a hard surface. We had several moments of near white-out as the winds blew the snow so hard into our faces. All the while we were desperately wishing the weather would clear up to give us the beautiful views we knew were about us. There was also a subtle hope in the back of my mind that if the weather improved we could make a run at North Star but this was not meant to be.
We followed the road to the "pass" at 12100 where the road essentially meets the ridge. The road would continue for another half mile or so past this until it ends at an old mine (The Magnolia Mine) on the south side of North Star. It was here we decided to turn around to get us back in time for some lunch and also to give us enough time for another hiking option. As we descended we ran into a group of 8 snowshoers who told us they were headed to the pass as well. What we didn't realize, was if you descend from the north side of the pass there is a trail that heads down to a lake and then meets another old road that traverses the north side of the ridge back to Hoosier Pass. A great trail for another day. Our descent took us back to Hoosier Pass at a total of roughly 2 hours on trail.

I have tracks of our ascent and descent routes on this hike included in a KML file. 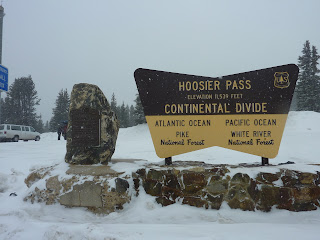 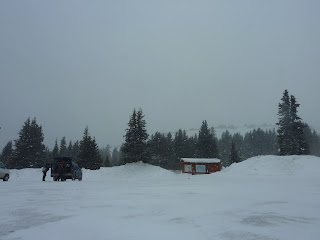 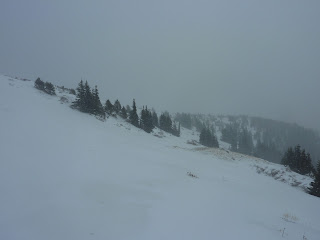 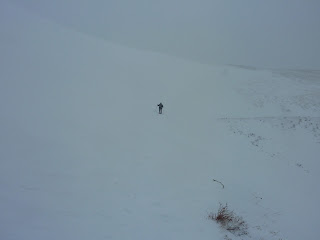 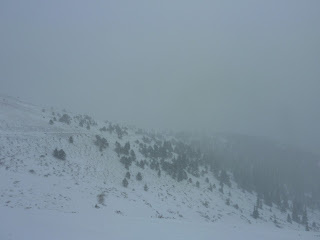 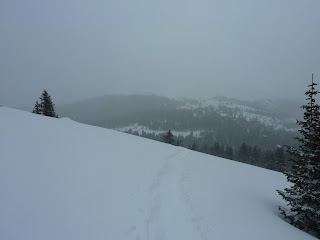 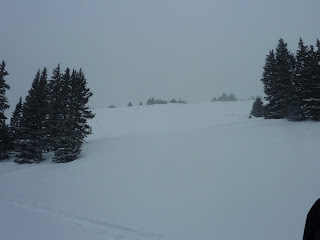 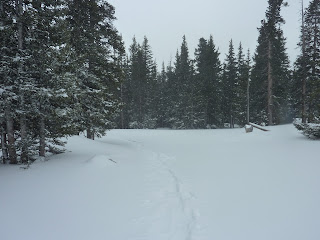 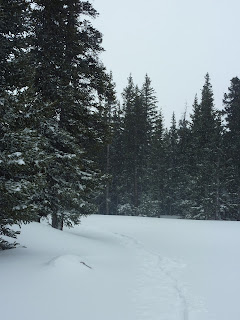