The last time I was up Mt. Sherman was August 3, 1992. That happened to be only my second 14er hike and being so young and so new at this, it was a rough one for me. The one thing that really stuck in my head from Sherman was how windy it was. I can recall hitting the Sherman-Sheridan saddle and the wind was just awful the whole summit ridge. 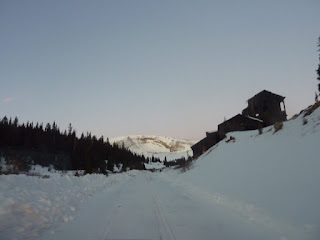 Fast forward 19 years and we are looking for a great option at our 2nd attempted winter ascent. After having summited Quandary Peak last March and fallen in love with the winter hiking, we decided another attempt was in order. We found a short window here in February 2011 to make this happen (2 hiking days to be precise) and settled upon Sherman for our first. The earliest weather reports had this day pegged at a high in the 20s with mostly sunny skies. As the days grew nearer to the hike the weather began to deteriorate. Last we checked, the forecast was for highs around 10 with wind chills and a low in the -15 range. Winds would be in the 20-30mph range and a 30% chance of snow with clouds. Well, with a window such as we had, we would find a way to endure the cold, just praying for no white-out conditions. 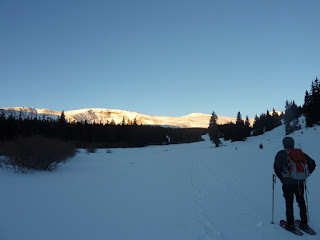 We arrived at the trailhead right around 7am. We were pleasantly surprised to find that the road had been plowed all the way up to the Leavick mining site.

We had read that often the winter closure for the road was a mile before this. That knocked 2 miles off the hike before we even were started. We donned all our gear including snowshoes and were on our way around 7:11am. The initial hiking was fantastic as the skies were blue and the wind was almost non-existent.


As we hiked closer to Sherman though, the winds began to pick up. About 3/4 mile in on the road we decided to take off the snowshoes and mount them on our packs. The road was in just that good of condition that you were on rocks or hard snow almost the whole time. About a half mile later, at around 11700, the winds were really beginning to howl at us and so another stop was in order to put on goggles and balaclava. I was starting to wonder if my nose was going to fall off. 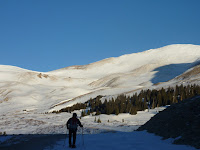 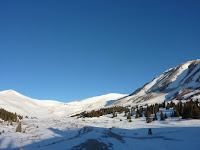 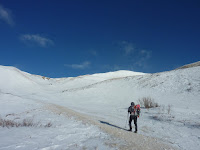 The turn-off where the South Slopes winter route comes was at 1.71 miles from Leavick by my GPS's reckoning. At this point we were an hour and a half in and about 743 feet up in elevation. It was here we put the snowshoes back on as it was clear almost all the next 2000 feet were snow covered. The turn-off is very easy to spot as the road makes a hard left here and then a quick hard right around a corner after that. From the turn-off you head almost due north and will ascend 100+ feet up a good 30% slope to gain a small ridge. The snow was hard on the slope so the traction from the snowshoes was welcomed. 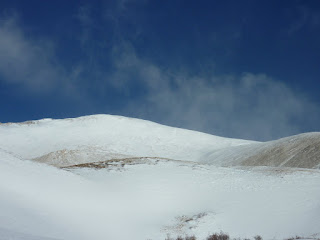 At the top of this slope you will get your first look at a big bowl in front of you. It was quite snow filled and relatively steep in the middle so we decided to avoid that on the ascent. We traversed around the western side of the bowl gaining the top of it around 12400. On the top we found it to be wind-scoured with mostly rocks to be seen. It was here I made yet another snowshoe conversion and went to boots again. We hiked northeast from here angling for the small gully that is found at the base of White Ridge. It appeared from there you could take your picks as to how to approach Sherman. 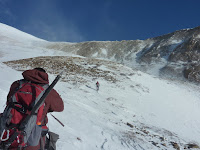 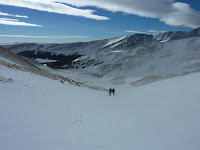 We hit the gully at the base of White Ridge at about 2.2 miles in and 12500 in elevation. We ascended towards the right side of the gully trying to stick near the rocks as much as possible since we were in boots. There was some minor postholing going on at times (3-6 inches). We again paused around 12,700 to put the ole snowshoes back on as we wanted the great flotation and we were also to the point where the traction on the steeper slopes was also helpful. It was about 13000 and 2.5 miles in that we got our first good look at the point where you turn due north and make a bee-line for the summit. By our reckoning this point was at 2.68 miles in and 13200 in elevation. The hiking of the gully to that point was a work-out but still enjoyable. 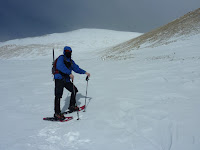 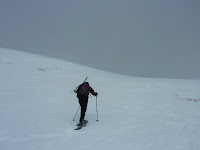 After 13200 the slope begins to get much steeper. It was also at that point we had a great trail debate as to whether to ascend the rocks to our northeast to gain the saddle or basically "run the ball up the middle" and stick to the snow headed straight for the summit. Liking our snowshoes we decided "up the middle". This began nicely but at around 13450 the slope angle hit 40 degrees and didn't let up. The surface snow was also mostly soft which meant with each step we took we could lose half of it from slippage. About 100 feet into this we could spy what looked like the flatter portions of the saddle and we started veering northeast to hit these quicker. 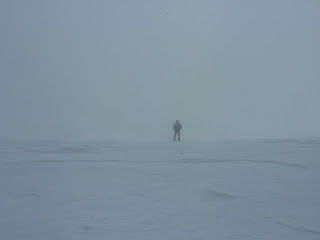 We finally leveled out at 13,900 and were hoping to find the summit was right there. Well, I guess we were close. What was most disheartening was the winds were now at their worst (gusts around 50 we think) and the temp was awful. Bundled in our layers we still felt warm enough, but taking hands out for camera work or to change gear was awful. We also had nearing white-out conditions with the clouds and the blowing snow. Visibility was at 100-200 feet. Thankfully, as the visibility went up and down we could catch a clear sight of the summit and the snowy path leading to it. We decided to keep the snowshoes the whole way for the traction and proceeded on. From that spot it was a .13 hike up 150 feet to the northwest for the summit. The wind-blow snow formations along the way were awesome. The slope angles were moderate. 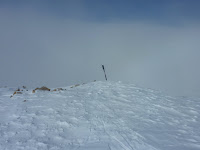 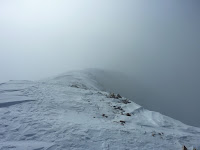 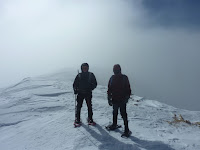 We spent all of about 5 minutes on the summit as the wind and cold were awful. Snapped a few photos, passed on the summit register for fear of frost-bitten fingers, and started to head down. We descended about 20 feet to the east side and found an area with considerably less wind. We grabbed our energy-refuels there and took a few more minutes to enjoy the "almost-top".
As we descended, starting around 13900 we started contouring to the east hoping to gain the flatter saddle sooner. We were also still contemplating a descent on the rocks. About 60 feet into this contour I decided I liked the look of the slope and just headed straight down. 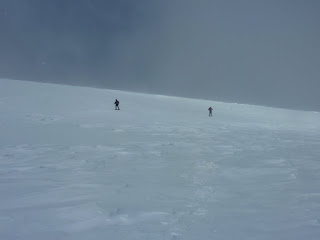 I was impressed how well the snowshoes gripped and I had ice ax in hand in case of any big falls. This took us down to the saddle at 13720. Here we contoured due southwest aiming for these white poles we saw sticking up. We weren't sure if someone had placed them to mark a route, but they seemed to take us where we wanted to go. This got us down to 13470 when we started heading almost straight down again. We contoured so far southwest in the hopes of avoiding the very steep slopes we hit on the way up between 13300 and 13500. Right at 13300 we decided it was time to give glissading a try. We had a nice open slope with no dangers in the runout. I went first and was able to slide (off and on) from about 13290 to 13090. I had pretty slick pants which helped. We would learn here that the snow was a little too soft and the slope not quite steep enough for a *great* glissade, but was still fun. Denny and Matt each tried there as well but with not much luck. 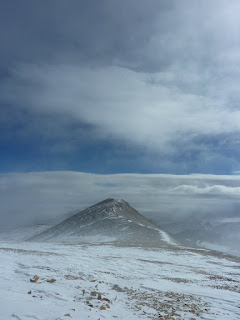 For the next several hundred feet of the descent we were moving quickly down the snow and were looking for new slopes to glissade upon, but never had much luck. We could get started for a few feet but would then sink into softer snow. Right around 12400 we found a good 50 foot slope to try and had decent luck. 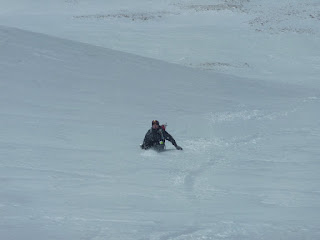 Our last hope was the bowl we had skipped to the west side on the way up. Running it right down the middle held promise for us. This started around 12330 and I had a great 100 foot run gaining great speed through there. Even tried out my ice ax in self arrest position on the way down. After that great run we hit our only hazard on the descent and that was massive postholing in a meadow. We had mounted our snowshoes and so we postholed 2-3 feet trying to make our way out. And next thing we knew we were back to the road. The descent was such a joy with the safe glissading attempts and the self arrest practice. We made quick work of the road back to the car and finished at 2:35pm. All totaled, the day was 7 hours, 21 minutes. 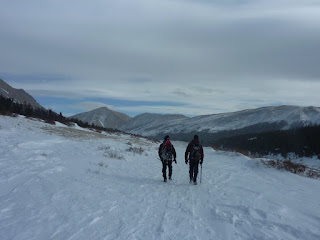 I have two tracks taken from this hike. One is of the ascent route and one of the descent route. It is rather interesting actually to compare the two as our route varied somewhat between. On the descent we tried to avoid some of the steeper sections near the top and we also had some variations in search for a good glissade slope. Here is the KML download: 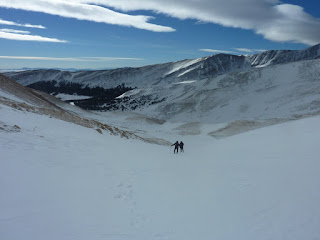