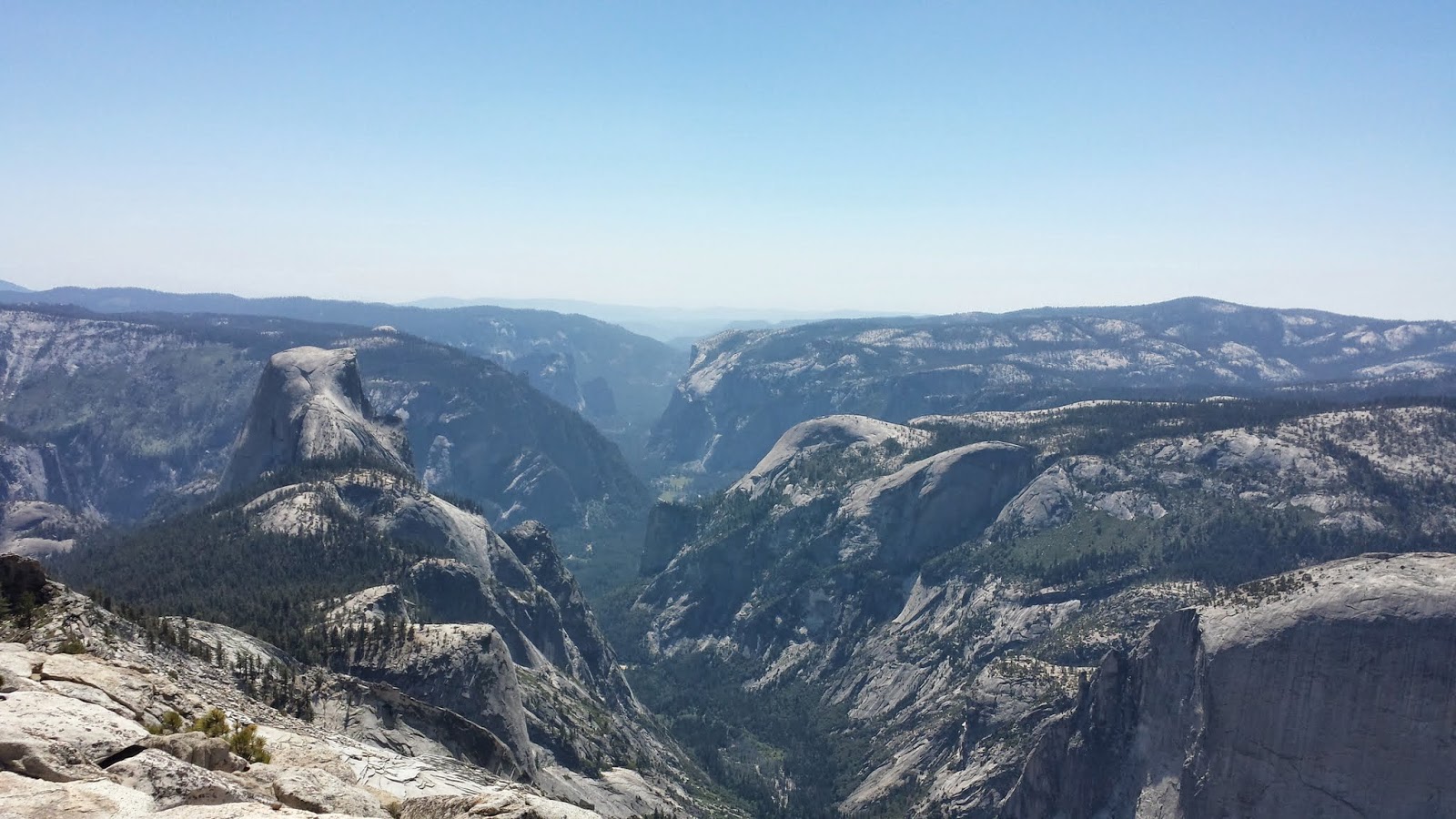 This hike began a 3-day backpacking trek for us with Clouds Rest not really even being the main objective.  We actually conceived of this hike back in 2011 on our previous trip.  We would have attempted it then except the Tioga Road was still closed to everyone when we were visiting.  That left us scrambling for new plans in 2011.  This year, the snowpack and the roads would work in our favor.  In planning this year's attempt we were left with one hurdle: how do we get to the trailhead?


There are a few options of shuttling oneself up to Sunrise Lakes TH but most don't start til July (usually because of the snowpack).  We were fortunate that the DNC Tuolumne Meadows Hiker's Shuttle decided to start early this year and was even running on weekdays which helped us out.  We had just one car for our group of 3 and with a hike from the Tioga Road to Yosemite Valley the vehicle had to reside somewhere.

Early on a Tuesday morning we hopped the shuttle bus at 8am at Curry Village and it dropped us off at the Sunrise Lakes TH a few minutes late at around 10:20am.  We had our packs already to go, so it was just a pit stop at the trailhead and we were on the trail.  One of the typical concerns in leaving from Sunrise Lakes TH is the water level of the outlet from Tenaya Lake.  This year we actually scouted that out on our drive home from Tuolumne Meadows the day prior, and found it was nothing of concern.  So it was this morning, we hopped a few of the rocks and a log across what was a minor stream and we were off.

The trail begins very mellow as a dirt trail through the woods.  For the first mile and a quarter there is really no elevation change to speak of.  At 3/4 of a mile in we strolled by some large boulders on the south side of the trail and decided to scramble up them to check out the views into Tenaya Canyon.  They were unfortunately mostly obstructed by trees but we did enjoy an early morning scramble. 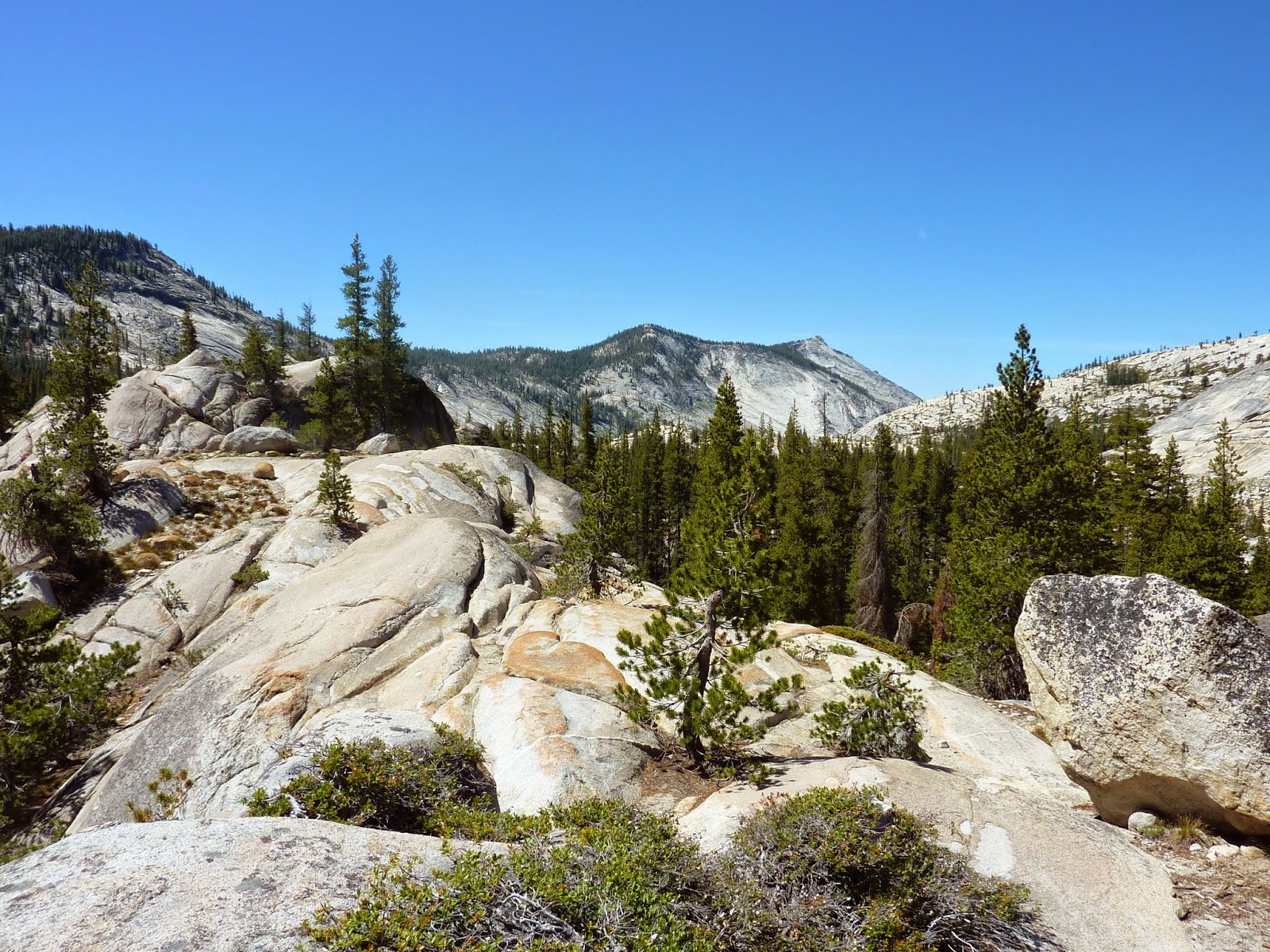 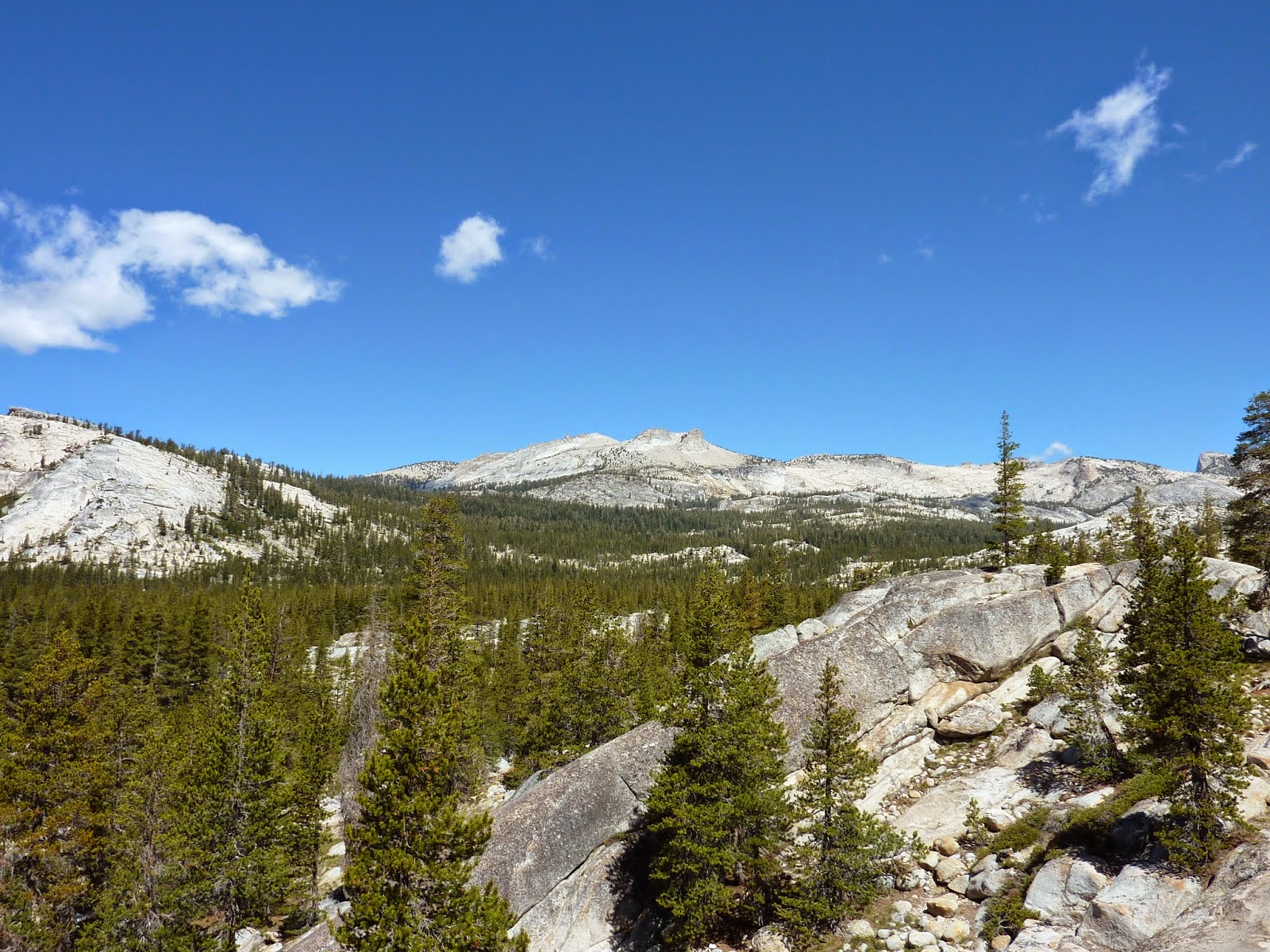 As we hiked along we catch leap-frogging with a pair of older gentleman who we would see a few other times later in the trip and were pleasant to speak with.  The real fun on this trail, especially with 30+ lb. packs is at the 1.5 mile marker where the first big climb begins.  You're at elevation 8270 or so when you start the slope and you end just shy of 9300 in just a mile of hiking.  This means a steady, switchbacking grunt with a big pack up 1000 feet of mountain slope.  We took our time in this endeavour shedding a layer and pant legs as we went. 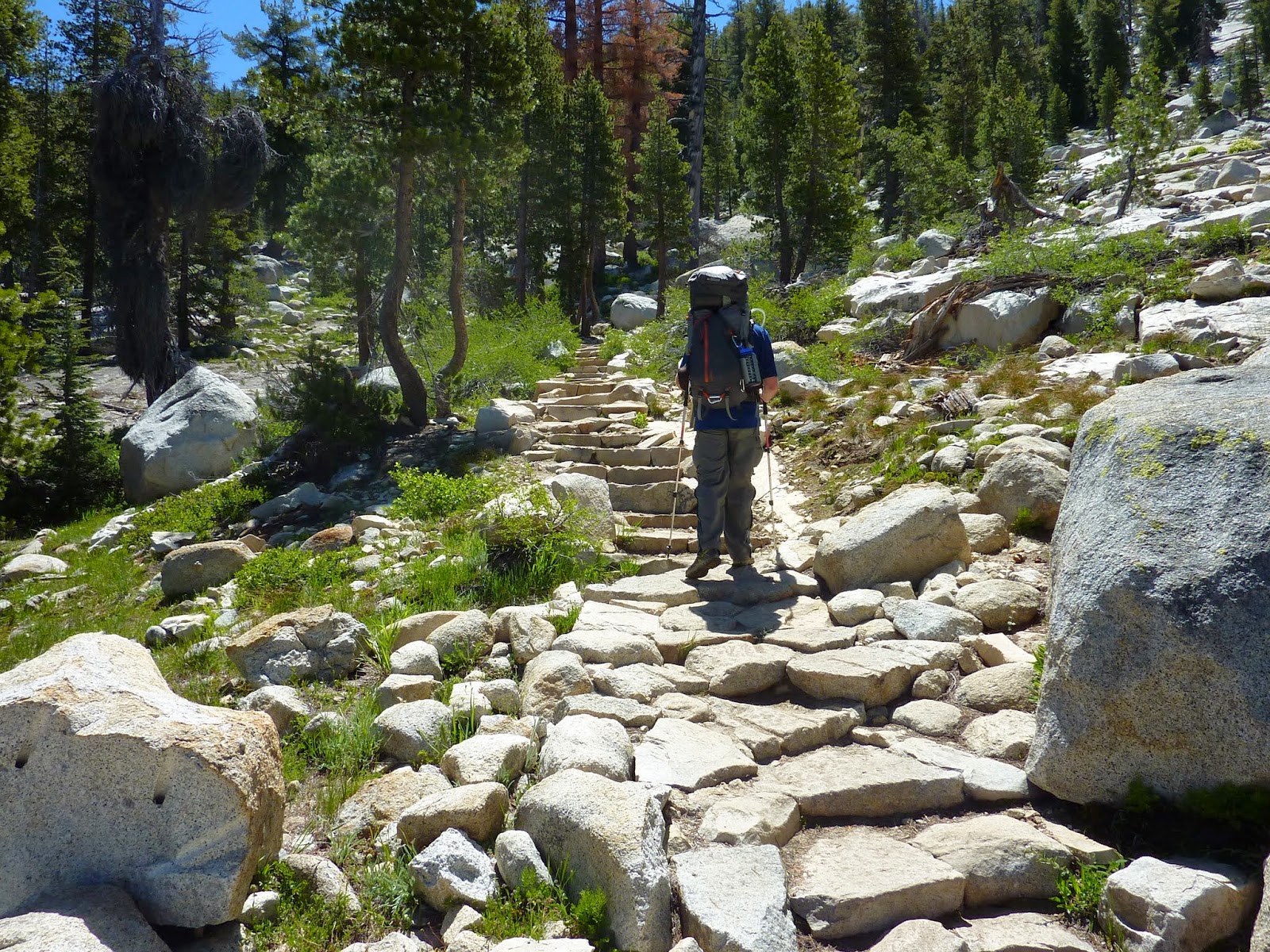 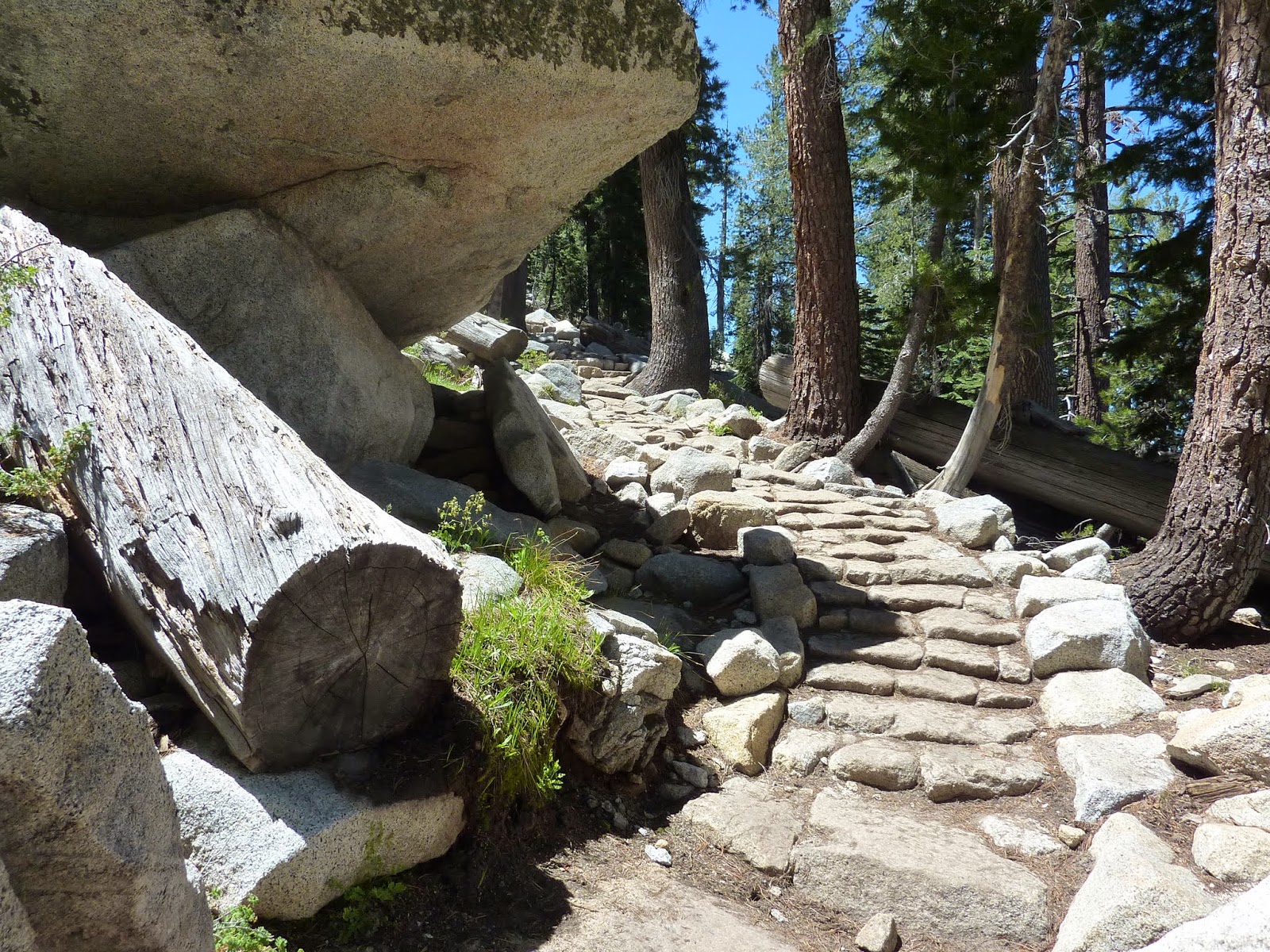 Looks at the climb up the first major slope
Another of our initial concerns for this hike had been encountered some lingering spring snow in this area.  We had debated while packing whether to bring our microspikes and ultimately decided, based on the snow conditions on Mt. Dana yesterday, we wouldn't need them here.  Well, the verdict was we were right, they were not needed.  I recall only see one or two very small patches of snow off trail on this north-facing slope and that was it. At the top of this slope climb we encountered the trail junction that breaks off to Sunrise Lakes and the High Sierra Camp there.  From this point on we were all Clouds Rest trail.  Much to our dislike, the trail actually descended about 300 feet at this point and then worked steadily at a level pace for about a mile past a high pond and through beautiful forest.  It was in this section that we had our Dave Ramsey Finance discussions.  Pretty odd, right?  But insightful. 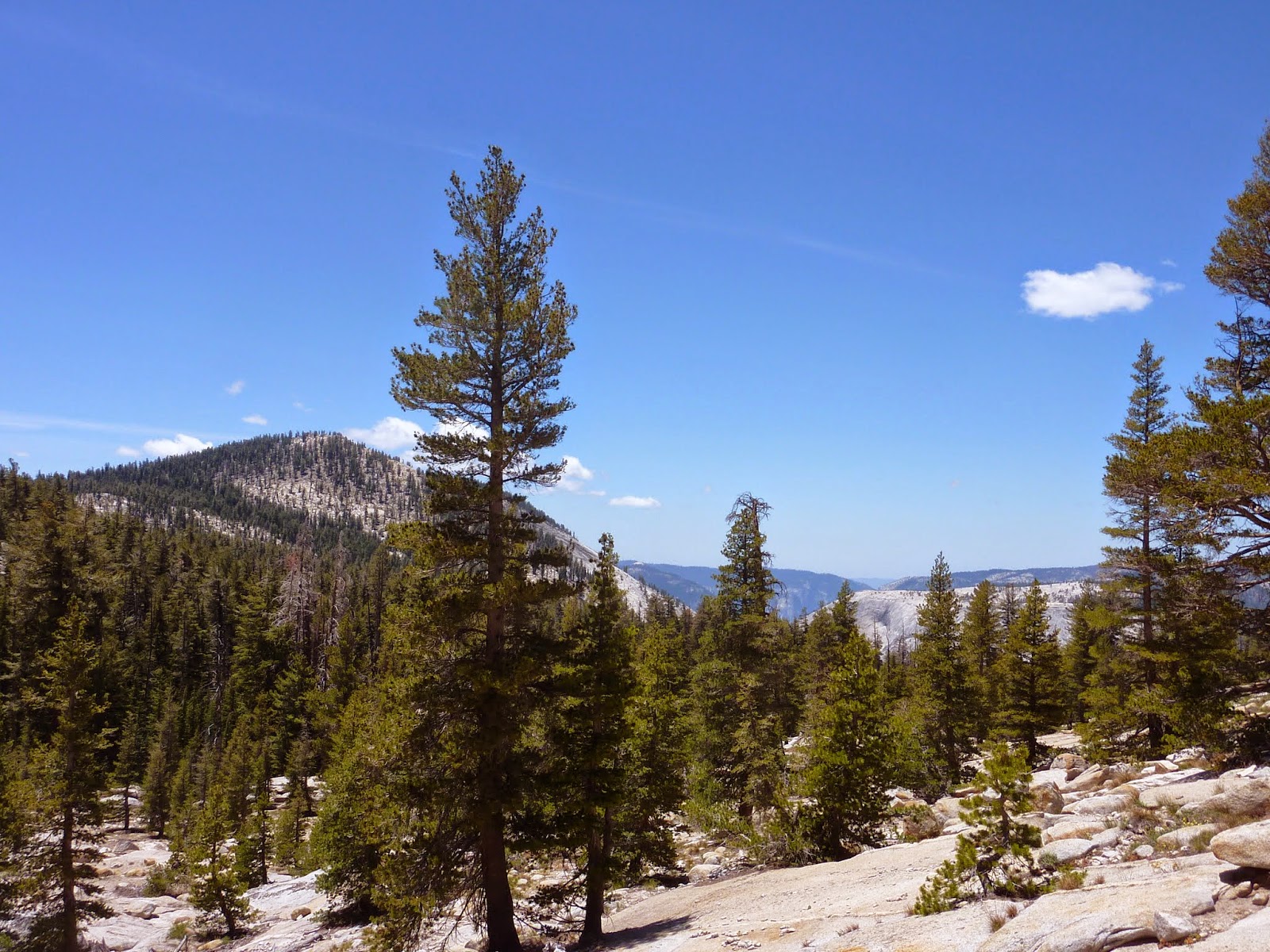 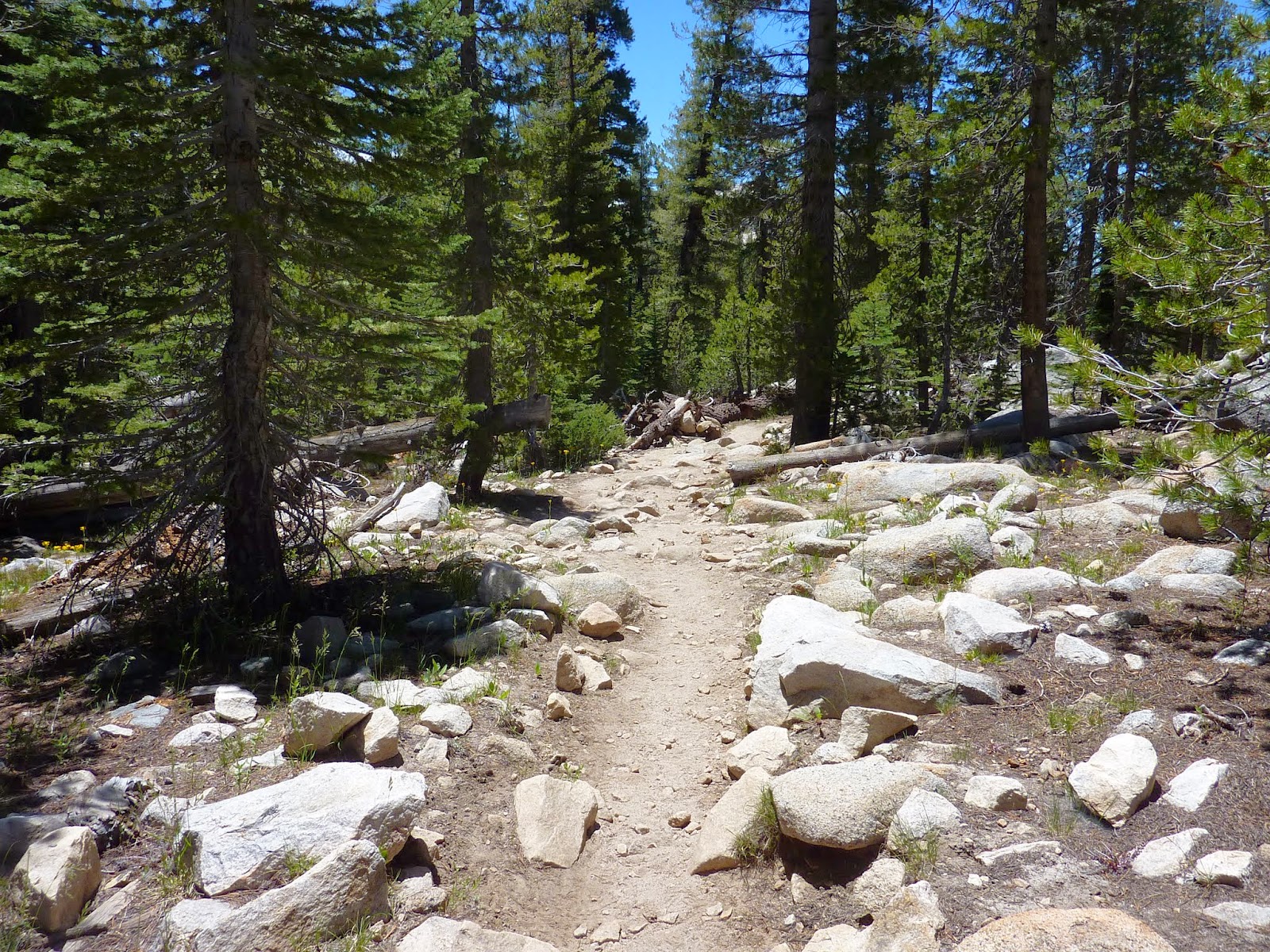 Our destination begins to loom closer

At just over 4 miles in the climb to Clouds Rest begins again.  For just under a mile and a half its a pretty gradual climb that brings you to about 9400 feet on Clouds Rest's north side and with just over a half mile to go.  Early in this section another trail junction happens.  A connecting trail that bypasses Clouds Rest and heads to the John Muir Trail breaks off.  The two older climbers we met decided to head this way for today and would take Clouds Rest from the south the next day.  We headed on for the summit.  The forest begins to thin out more as you climb higher.  The final 500 foot ascent up to Clouds Rest began to get steeper once more. 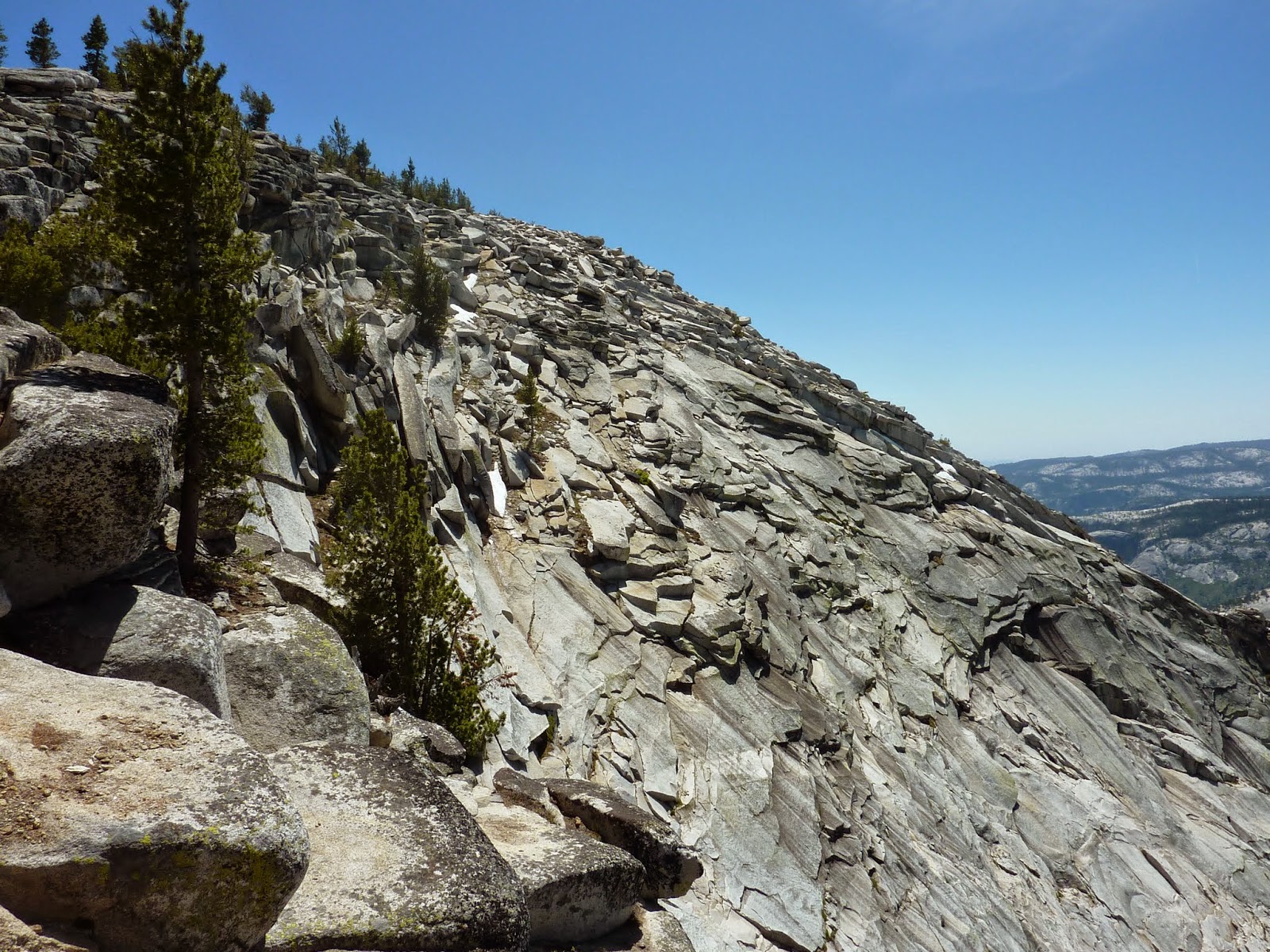 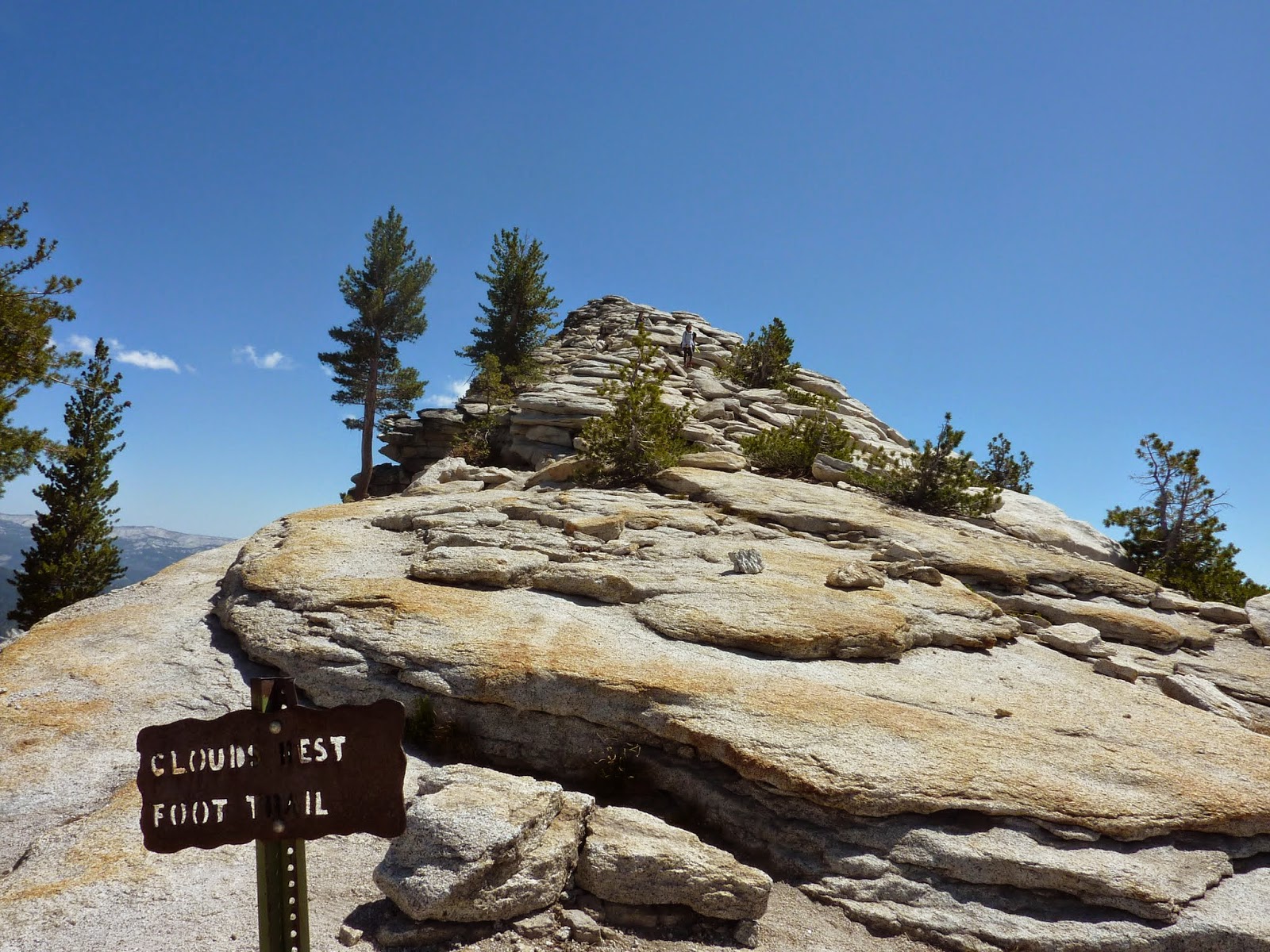 Heading up to the summit is an exciting place!


The last two tenths of a mile and 150 feet elevation begin to become a ridge climb.  It is also in here that the so-called Forsythe trail breaks off.  It bypasses the summit area and rejoins the main CR trail on the south side.  We almost got lost onto this but caught ourselves.  The nearer the summit the narrower the ridge gets.  Much to our surprise, the ridge crest began to gain some heavy exposure looking down the massive west face of Clouds Rest.  This led us to hug the east side of the ridge where possible.  We were most pleased that the heavy winds that had plagued us on Mt. Dana yesterday were nowhere to be seen today.  Finally at about 3:20pm we topped out on the summit to some incredible views.  It was a far different sight than when Matt and I had summitted in 2011 to deep snow.

The image that follows is a Photo Sphere made by the Google Camera app on my phone.  If you're familiar with Google Street View it is pretty much the same thing, only I took this all while standing on the Clouds Rest summit.  It'll give you a complete spherical panoramic view of everything I saw from where I stood.  It's pretty sweet!

We spent 30+ minutes on the summit taking it all in and knowing we weren't in any hurry to be anywhere.  All we had left for today was to descend as far as the JMT junction to find a backcountry campsite.  As we began to descend off the summit we found the trail to be a fairly steep rock staircase which we took with some caution in getting started.  Matt and I had remembered doing some of this under deep snow patches in 2011.  After the first 200-300 feet the trail begins to even out into switchbacks.  After the last of a handful of large switchbacks the Forsythe Trail joins in again and then its one big long swing down to about 9000  where the trail opens up out of the trees for a moment.  There is a hard right turn in this area that must be caught as the trail swings west around a rocky point at the southwest end of Clouds Rests long southern summit ridge.  The rest of the hike out was a number of endless switchbacks that very evenly take you down to the John Muir Trail junction.  It is interesting looking at the profile of this descent hike as it is an almost perfectly even descent in terms of slope angle, slowly but steadily dropping you about 2700 feet. 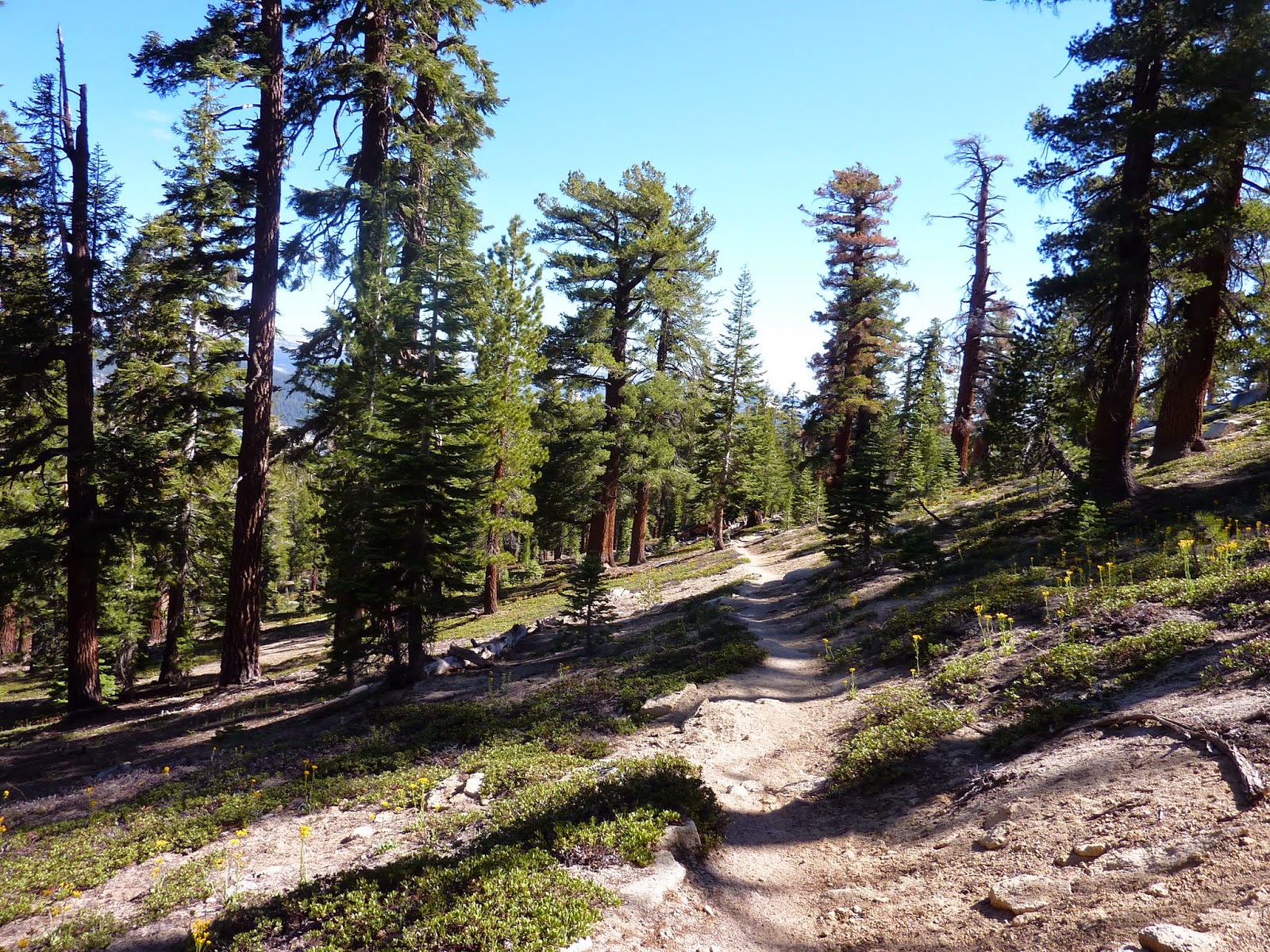 When we hit the John Muir Trail junction nearby Sunrise Creek we began to notice others who were already camping in the area.  We split up at the edges of the trail looking for a proper camping area.  We had in mind finding an already used area and other needs like a flat tent pad, a not-too-distant cooking area, and adequate proximity to the trail.  Without too much effort we found the perfect site on a small hill on the north side of the trail that would serve us perfectly.  In all, we were most pleased with today's efforts, especially while carrying our heavy backpacks up and over Clouds Rest.

I have Tracks and waypoints from our hike all contained in a KML file that you are welcome to download and use (at your own risk):