Today's hike was a matter of unfinished business.  When we had made our hiking trip plans in 2011 we had set the hike of Half Dome as one of our big goals.  In the months leading up to that trip we were following very closely the snowpack reports hoping things would be open by the time we arrived.  As it turned out, the cables would not be put up until about a week after we left.  While it was a disappointment for us to miss out on an attempt of Half Dome then, we did salvage an epic week of hiking nonetheless. 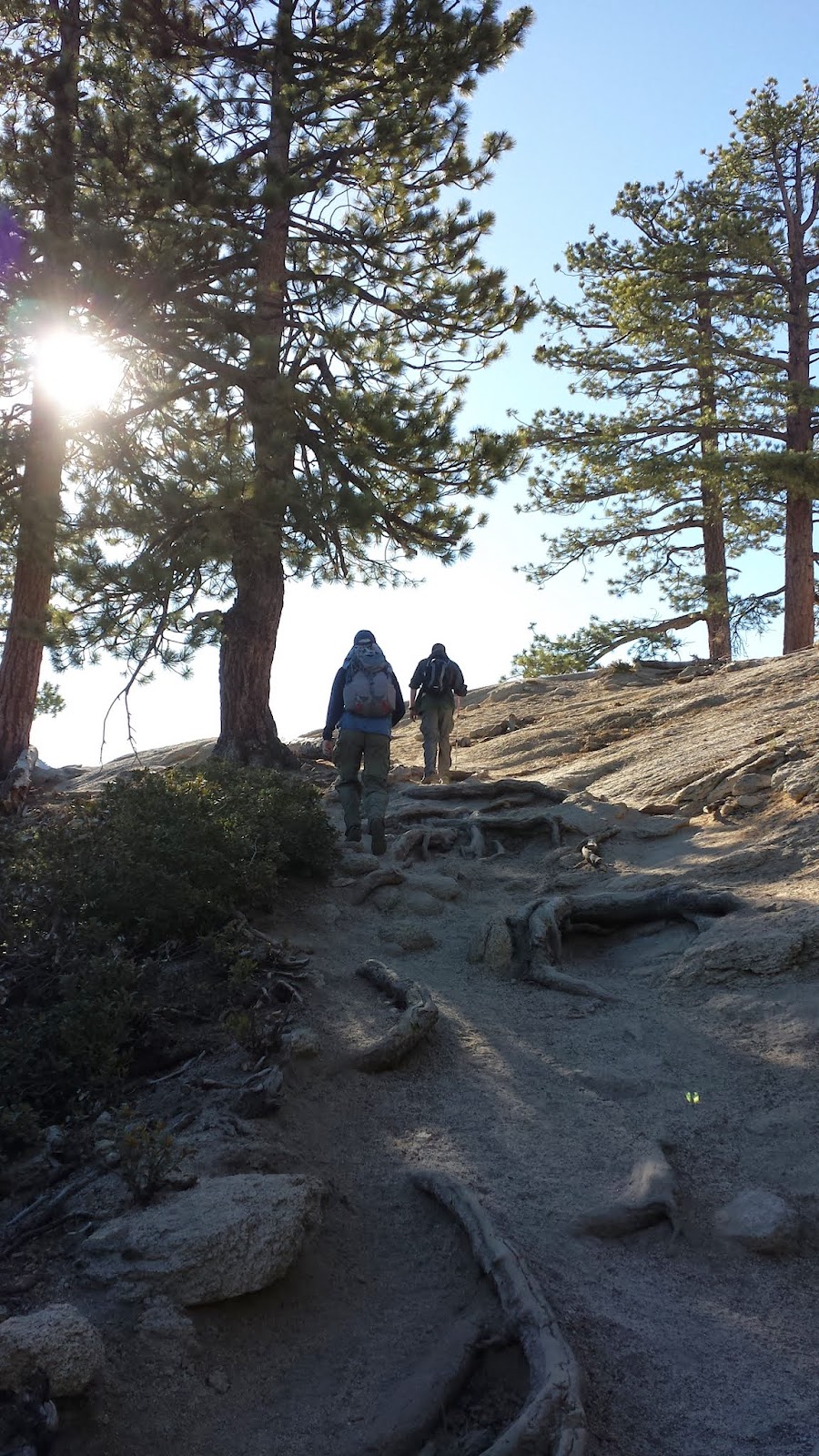 This year there were no concerns about snow.  So it would be just us and Half Dome. In terms of our group Half Dome provided an interesting 180 of experiences.  On Mt. Dana and Clouds Rest Matt and I had the experience and knew what to expect.  Here on Half Dome, Ken was the only one who had made it up there before and so he provided the experience.  It was also Ken who helped us obtain our permits, which is no easy task.  We were able to get the required Half Dome permits via our wilderness permit for the hike from Sunrise Lakes trailhead.  For those who wish to get the HD permit for a dayhike they need to enter in a lottery now to do so.  We met several people along the trails who were asking about permits and a handful of them mentioned how they were unable to get theirs in the lottery.

From our campsite near Sunrise Creek we had one of the shortest approaches of anyone heading up to Half Dome today.  Many hikers will approach from Little Yosemite Valley, even more will make the long dayhike from Happy Isles in the Valley.  We had a quick half mile approach via the John Muir trail to pickup the Half Dome trail. For the first mile of the HD trail from the junction it was easy hiking through the woods working our way northeast to the lip of Tenaya Canyon.  As the trees begin to open up the trail curls around back to the south and switchbacks for a few hundred feet to gain the large ridge that leads to the summit. At the ridge the trees really begin to open up.  There is even a flat almost meadow-like area for a while that eventually leads to the beginning of the subdome which was almost exactly 2 miles into our hike from camp.


At the Subdome standing in the shade we got some snack and resituated some of our gear to ready up for the steeper hiking ahead.  There was also signage here pointing out the dangers of weather from this point on as well the requirement of having a permit.


The slope of the Subdome itself was very steep, but the hiking was not itself very steep.  An amazing set of switchbacks and in some cases rock stairsteps were practically carved into the slope to make this hike more manageable.  It was impressive to see the engineering involved to get hikers safely through.  To get an idea of the steepness of this, consider that most trails that are real elevation-gain trails do about 1000 feet per mile.  On the Subdome you gain 500 feet in just under a quarter mile.  For the last 1/3 of the Subdome the swichbacking trail ends and you end up hiking granite slabs the rest of the way.  They weren't all that steep and careful friction hiking on the rock allows you to move well up the last of them to the top of the Subdome. 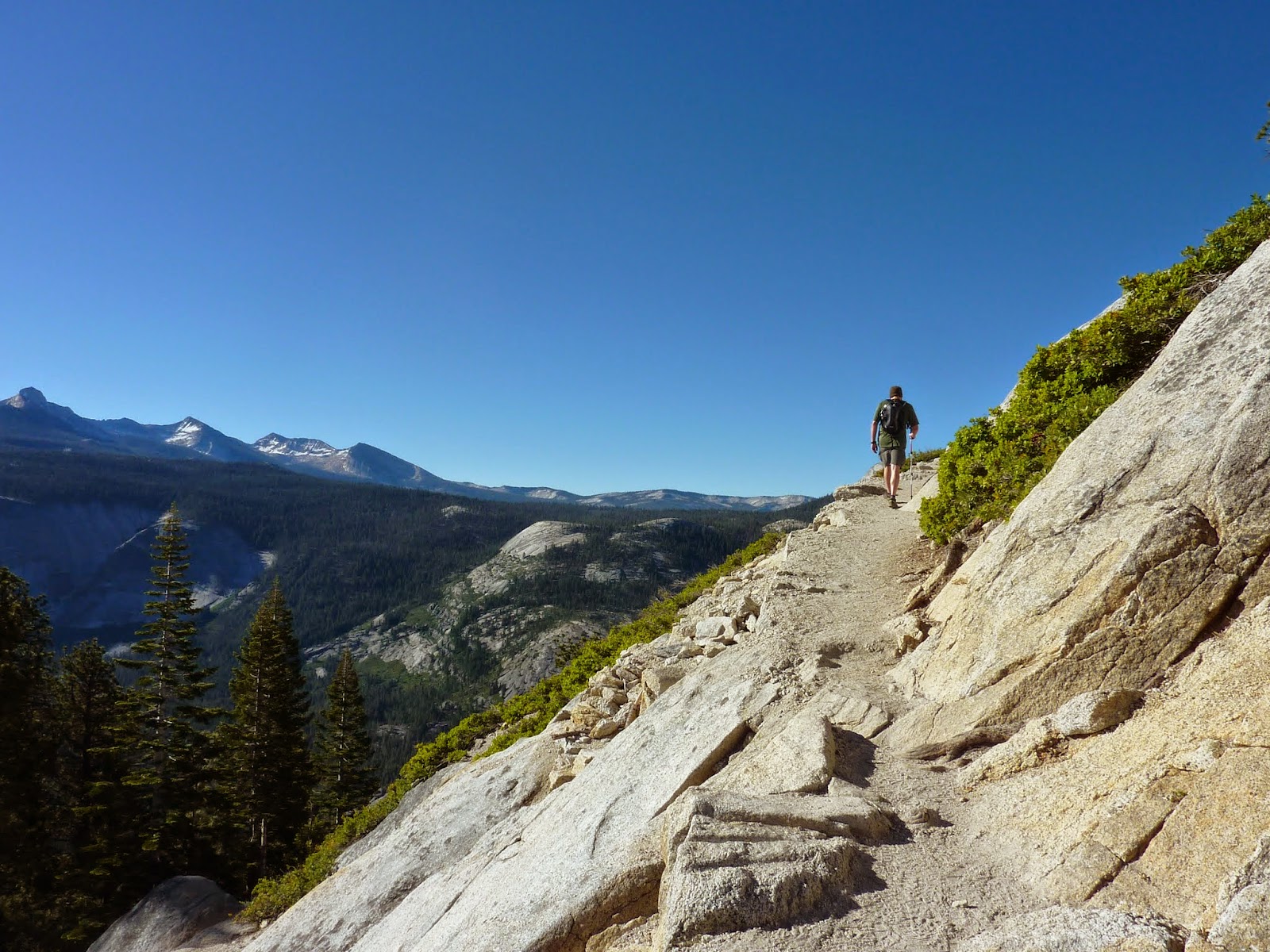 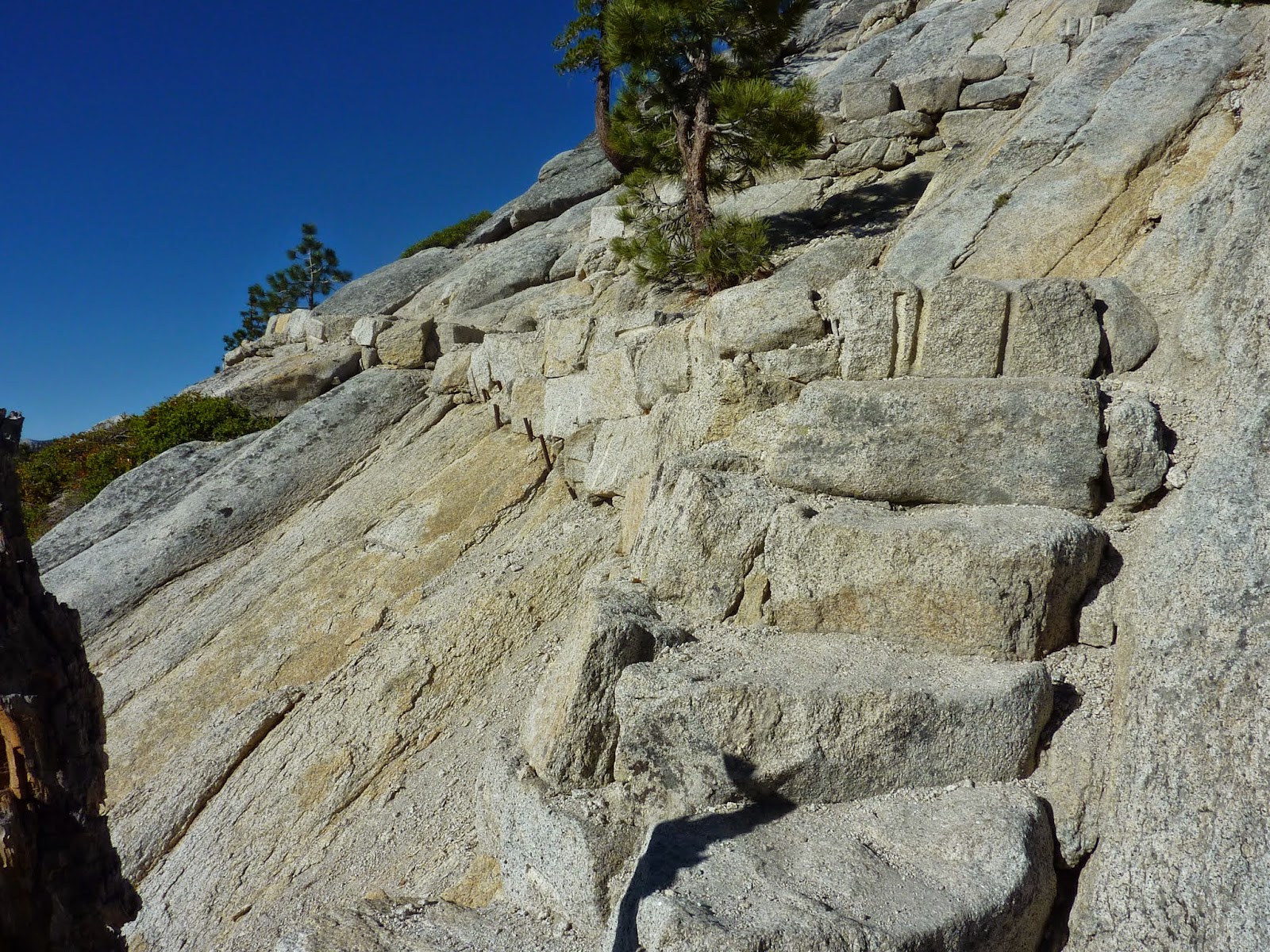 A look at the hiking up the Subdome, pretty wild engineering! 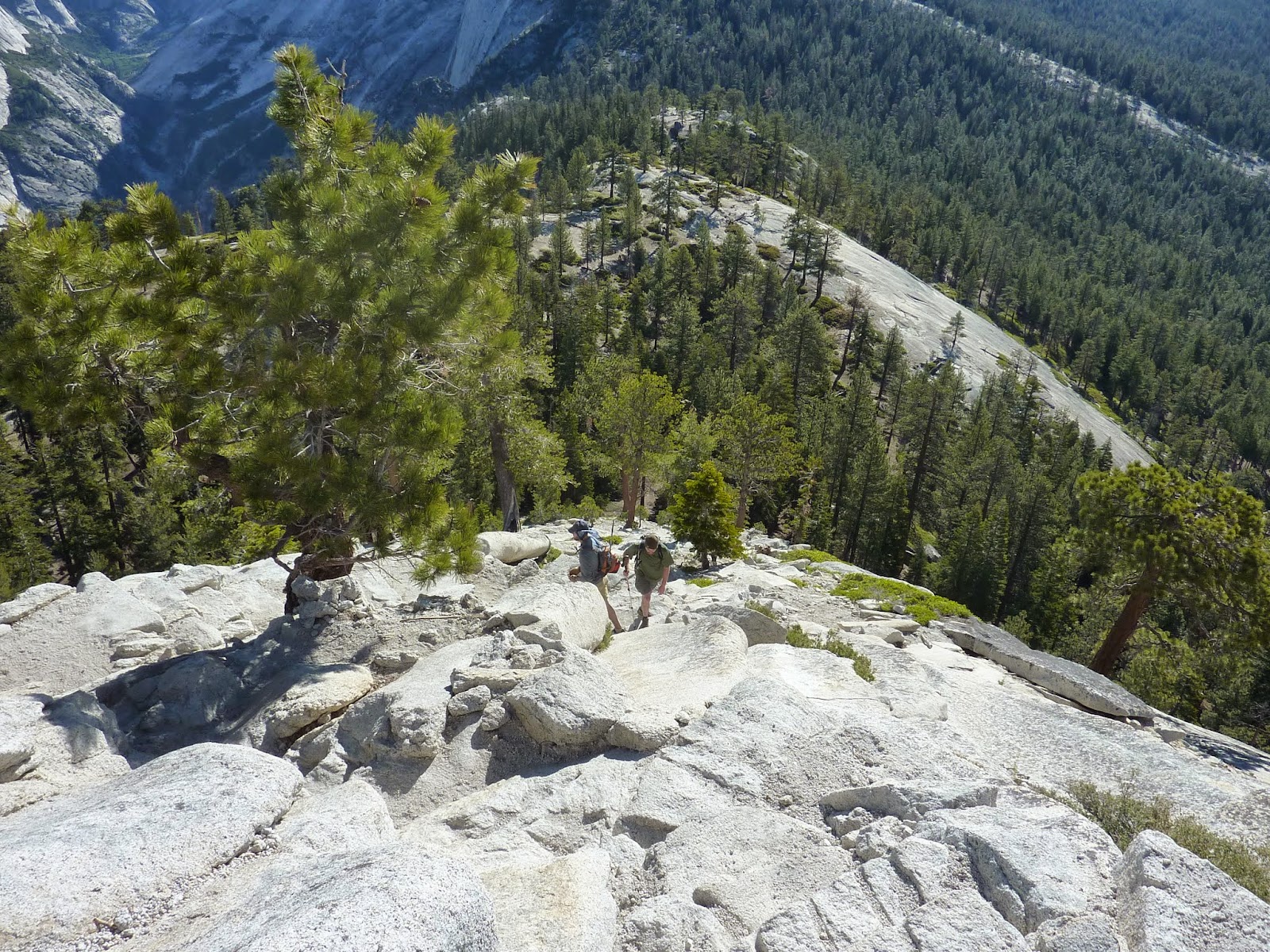 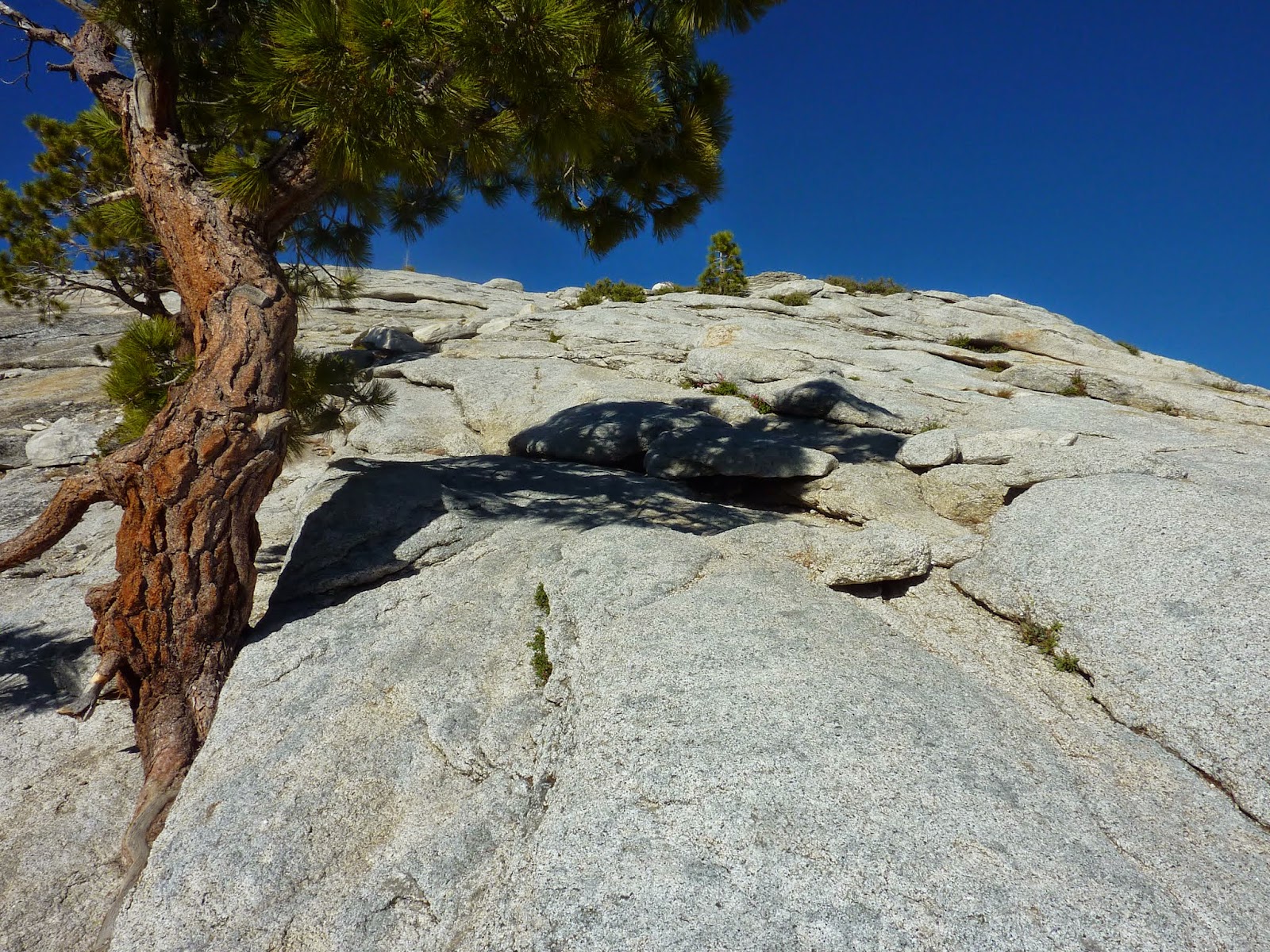 A look at the slabs nearing the top of the Subdome.

At the summit of the Subdome you really get the great daunting view of the Cables route. As it is with many of the steeper difficult sections on mountain peaks, it looks a lot worse than it really is.  We spent a few minutes here putting loose items like water bottles and trekking poles into safe places and then got ready for the ascent.  There were a few groups ahead of us that were on the summit, but just 2 or 3 on the cables.  We were pleased to be tackling them near empty.  There was a Scout group on the Subdome with us that we had been leapfrogging with.  They were a group of nearly 15 and we were wanting to get ahead of them on the cables so I led us off and got moving.


I had blue work gloves on for the cables and gloves really are a necessity on this.  The cables start off fairly easy but it isn't long before it really begins to get steep.  I was hanging on tight with both hands to the cables for pretty much the entire ascent.  This is evidenced by the fact that I only stopped for a picture at one location.  The general movement on the cables involves using your hand grips on the cables to help pull you up until you get to the next 2x4 which lays on the granite between support posts.  The ascent and descent is also challenged by large steps in the rock that must be managed.  While ascending there were 2 or 3 vertical rock steps of at least 12 inches that had to be climbed up over which added to the challenge. With all of the traffic the cable route has seen over the years the granite has become polished and I was genuinely surprised at the weakness of my traction on this rock.  My Salomon Speedcross 2 trail runners up to this point had never had any trouble with traction on any type of rock til here.  It definitely kept my attention to the say the least.  About half way up the cables I met the first of people descending from the summit.  While ascending and meeting another hiker I would stop at one of the 2x4's and then hang onto the cable on the ascender's right with both hands waiting for them to make the passing moves.  I met a Park Ranger descending as I neared the top. She was a young intern beginning to learn the ropes, no pun intended.  She jokingly asked if I had my permit and I said we sure did, but would prefer not to be getting it out in the midst of the cables route.  We both smiled and she kindly said she would be checking people at the bottom of the cables on the way out.

The top of the cables gradually level out and then eventually end as they are secured into the rock where they are no longer necessary.  I didn't check at the time, but based on my GPX it looks like I took about 12 minutes to ascend the cables. I grabbed a nice rock seat up top and waited for our whole group to be together before exploring the summit. 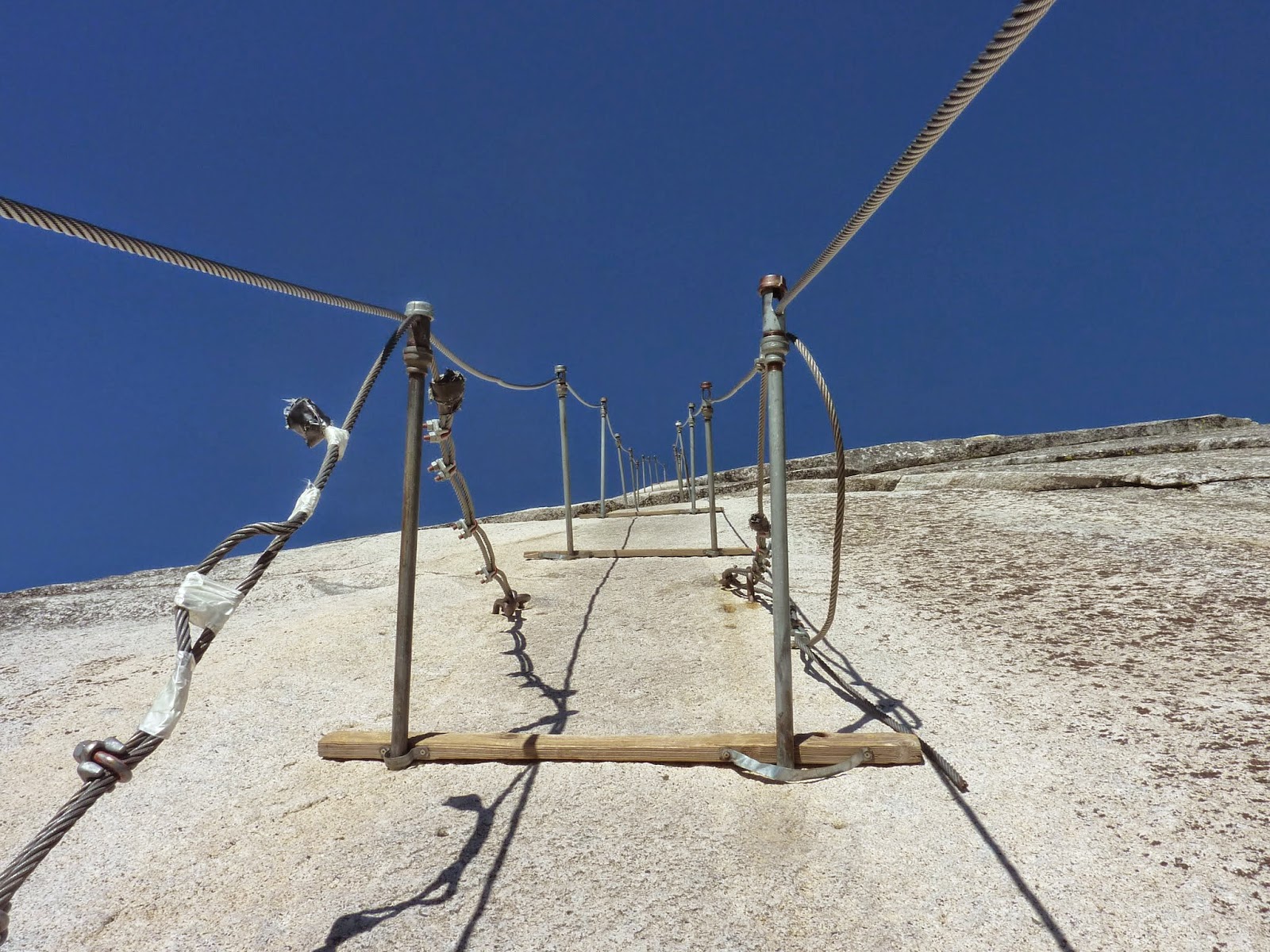 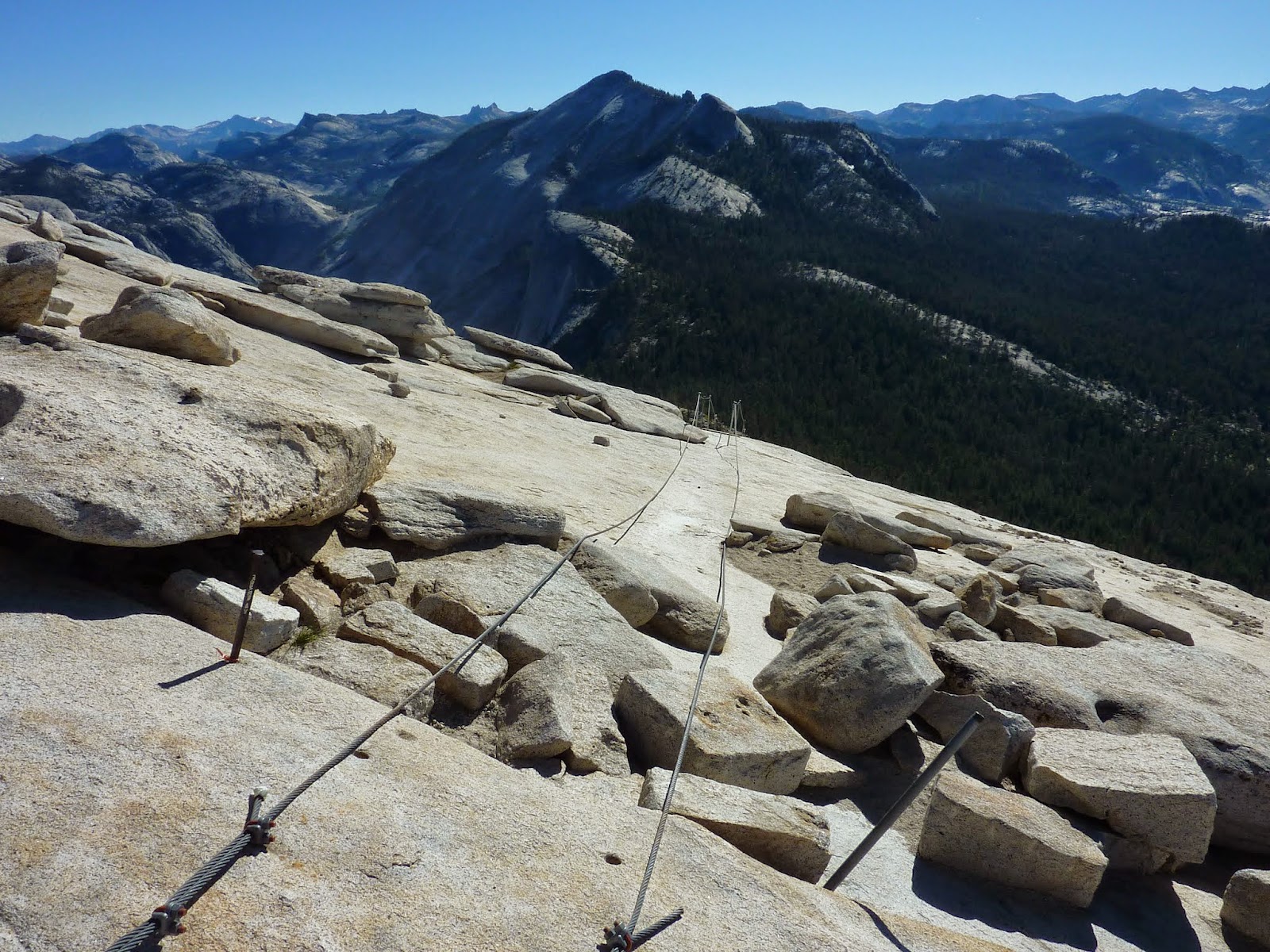 Nearing and then at the top of the cables

The summit of Half Dome is quite large, and in terms of size, not flatness, reminded me of another famous National Park summit in Long's Peak which was huge.  We explored and took pictures from the main summit area for a bit and then I explored over to the other "hump" on the summit to the southwest.  From that area there were great views of Glacier Point, the Merced River area and of course Yosemite Valley.


Here is a half 360 Photo of the view from the southwest area of Half Dome's Summit. Glacier Point and Yosemite Valley are prominent in the views.

Views: Looking Southwest from Half Dome's Summit by Mark Witte

We probably spent a good 30-40 minutes enjoying the summit and then finally got ourselves ready for the descent of the cables.  Even being a veteran of class 3-4 routes in Colorado and having seen my fair share of exposure, I would freely admit descending the cables had my full attention.  As we dropped into the steep sections it was really a workout hanging on tight to both cables with slowly stepping down.  The mixed traction of my trail-runners kept frustrating me and had me using my hand grips all the more.  Each 2x4 we would meet was a nice resting spot to recompose.  On the descent I must have passed at least a dozen people coming up.  They would usually stop to the side as I had done ascending, and I would be forced to hang onto just one cable to inch myself down.  I would usually turn sideways into the slope to more easily grip cable and fight gravity.  When I reached the bottom I cheered with some relief to have completed that section.  Looking at my GPX I may have actually taken 5 or 6 minutes longer, about 16 total, in descending the cables.

We did indeed meet the nice young park ranger at the base of the cables where she did check our permit.  She had a tablet gadget where she must have been recording some basic statistics.  After leaving there we made our way safely back down the Subdome and were anxious to be getting out of the sun.  After completing the Subdome the remaining hike went pretty uneventful.  The last half mile on the John Muir trail back to camp was quite warm and that section feels so desert-like. 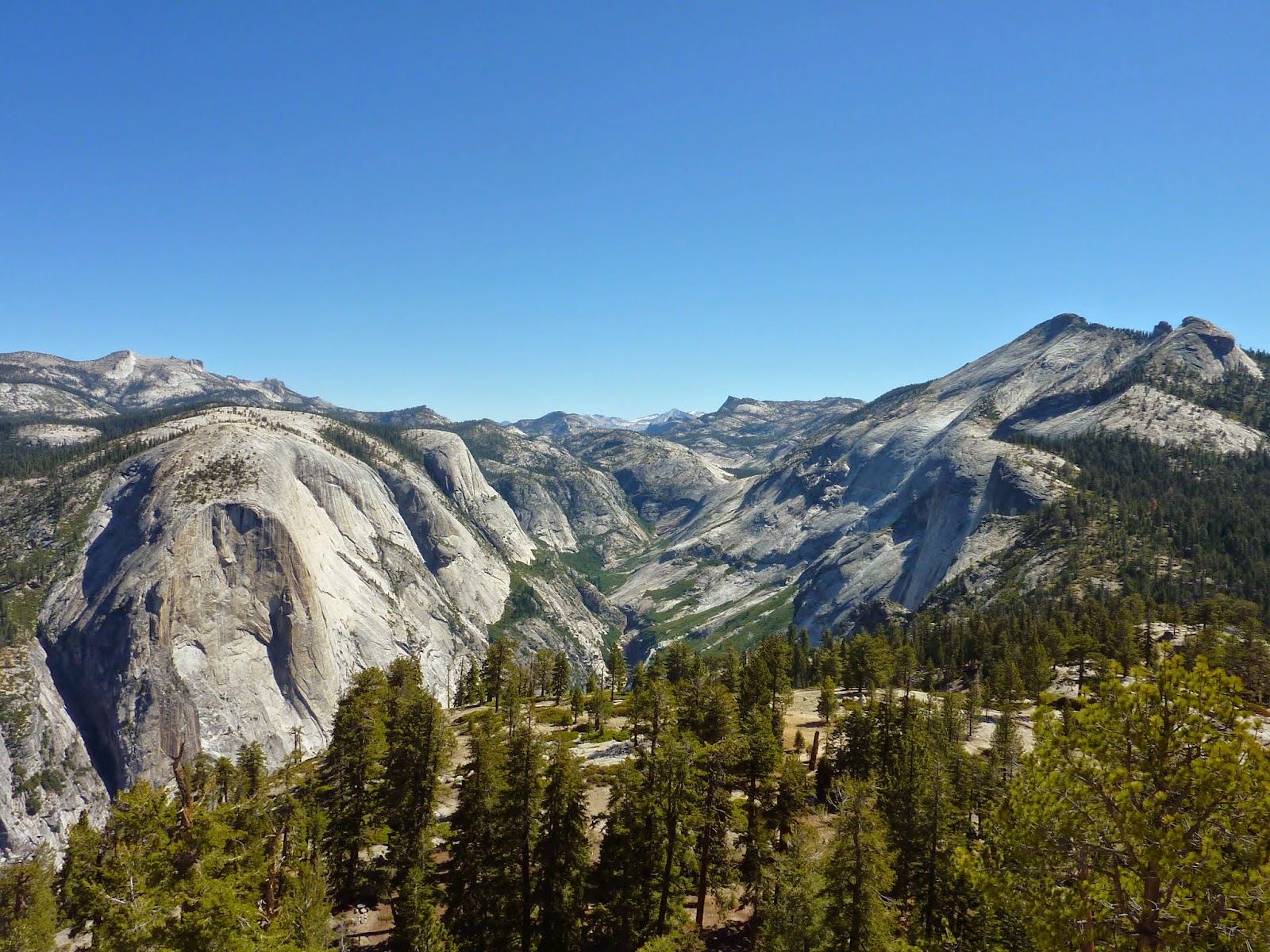 I have tracks and waypoints from our hike all contained in a KML file that you are welcome to download and use (at your own risk):

For my full Photo album from this hike click the image below and it will link you to Google Photos: 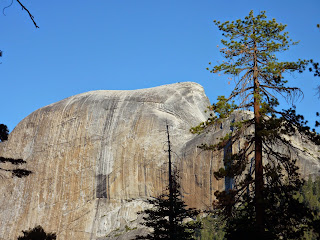