A hike of Mt. Dana was to be the great springboard of another amazing week out in Yosemite National Park.  I was joined by two good friends of mine, Ken and Matt, with whom I also made the 2011 hiking trip.  This time around we had 5 full days of hiking to work with and the way things fell into place we had our highest elevation climb on day 1.

In hindsight, we could begin to wonder if this was the way to go considering that we would be hiking a 13er on almost no acclimation.  Ken was coming from the Bay Area, I  had been in Michigan still the day before, Matt at least had 2 days under his belt in Colorado.  As a whole, that's a lot of low elevation for us.  We had arrived in Hodgdon Meadows to camp just after midnight before this hike so we would also be running on low sleep.

We had our camp packed up and ready to drive just after 7am and we hit Tioga Pass and the trailhead for Mt. Dana around 8:20am.  We passed a couple of rangers in the East Entrance station there and asked them about parking for Dana.  They allow for people to park in a large shoulder on the south side of the road just east of the park entrance.  There is also a large parking lot at the Gaylor Lakes Trailhead just a minute west of there.

As we left our vehicle we would immediately come face-to-face with our nemesis for the day: the wind.  Even at the Pass, it was fiercely windy!  I would remark several times throughout our hike that this was about the most wind I'd seen on any hike and by the end, it definitely ranks near the top. 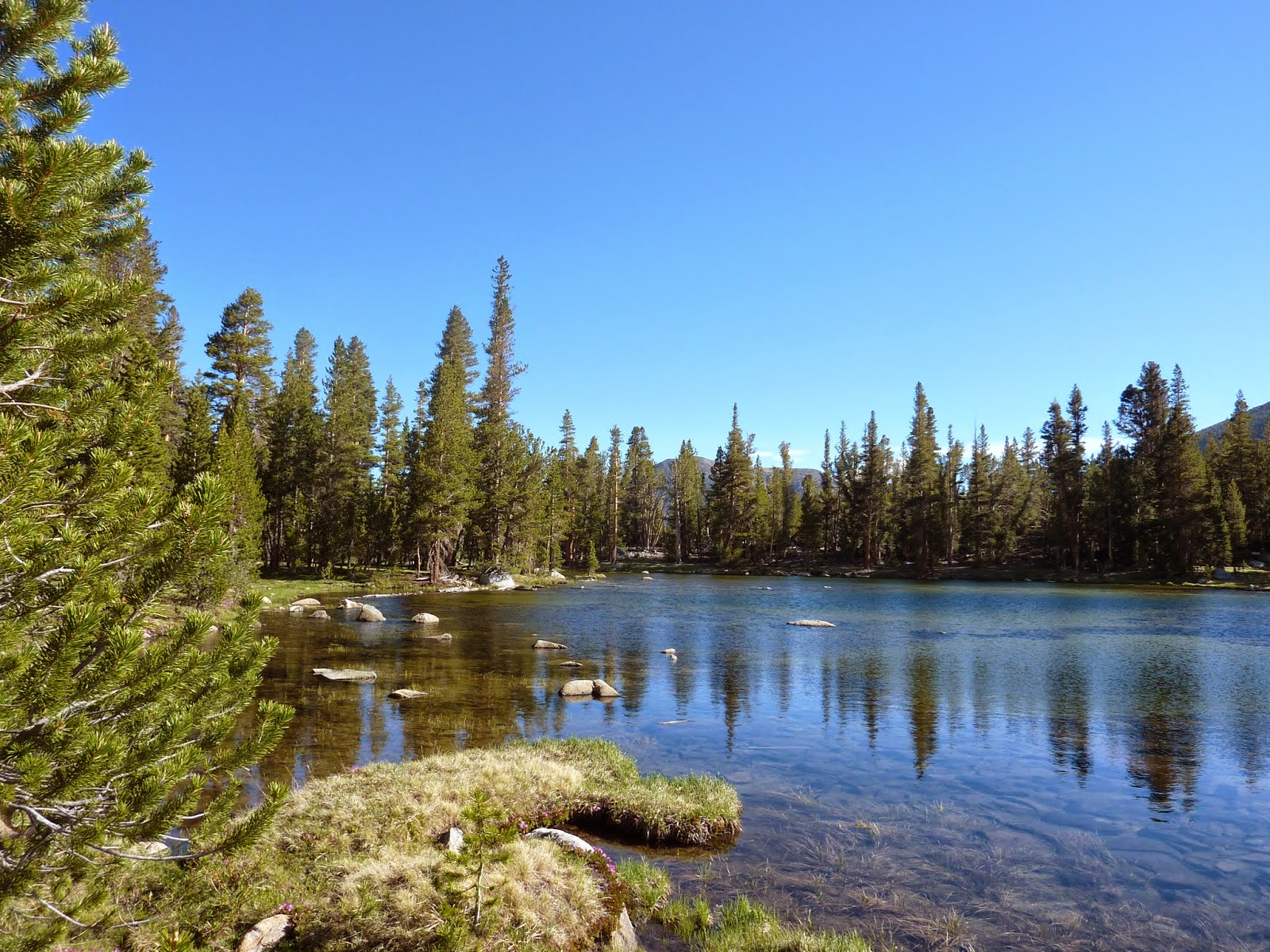 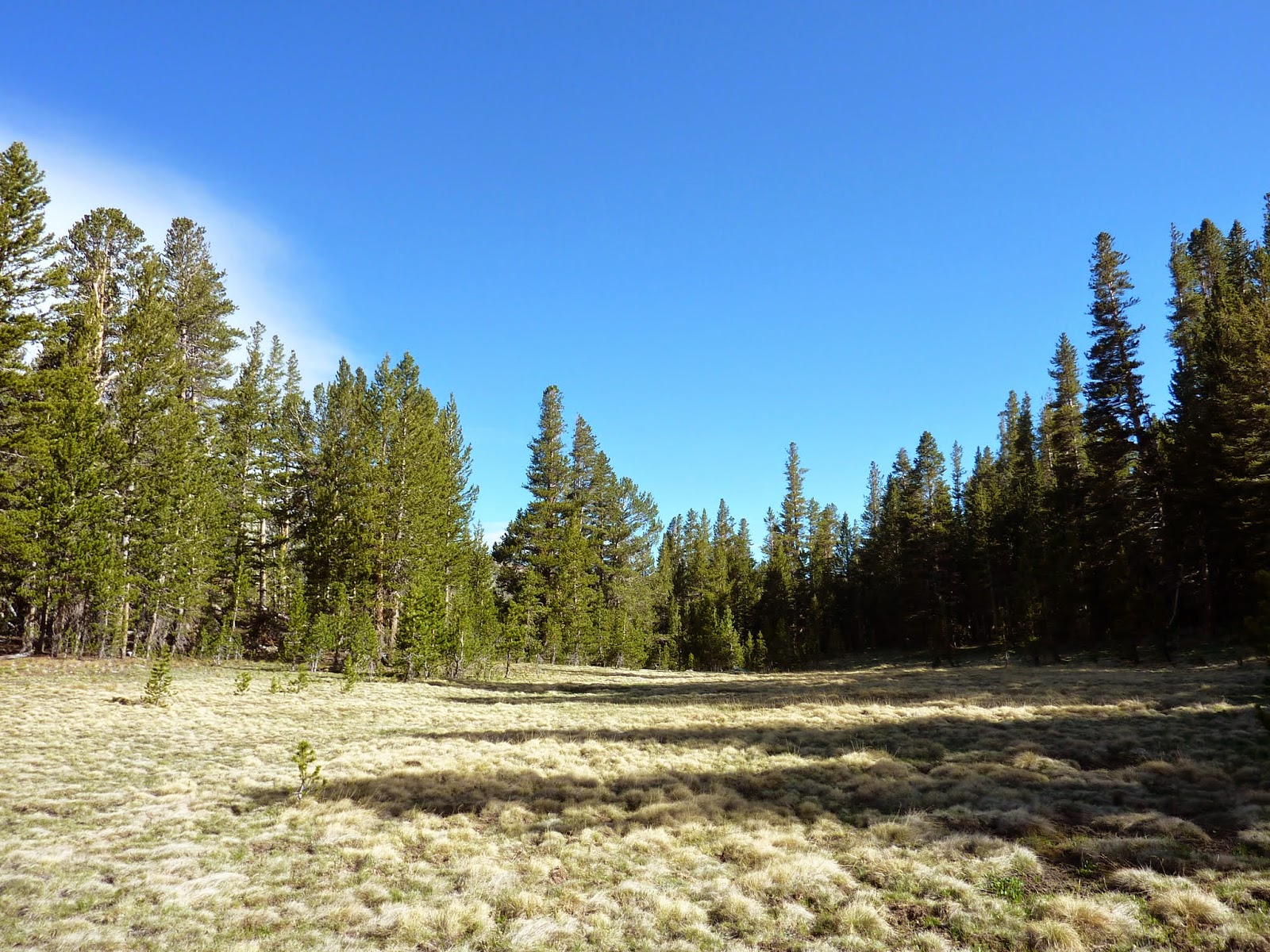 Dana Meadows were a sight to behold on their own

From the Tioga Pass park entrance the trail headed into the trees and starts to work its way through Dana Meadows and around a couple of ponds.  We were thankful that the winds died down some as we worked in the trees.  Just over a half mile in and around elevation 10,200 the trail begins to climb in earnest.  It works its way south of an 11,300 foot point on the west slopes of Dana.  We left treeline for good around 10,500.  From there the winds were relentless. 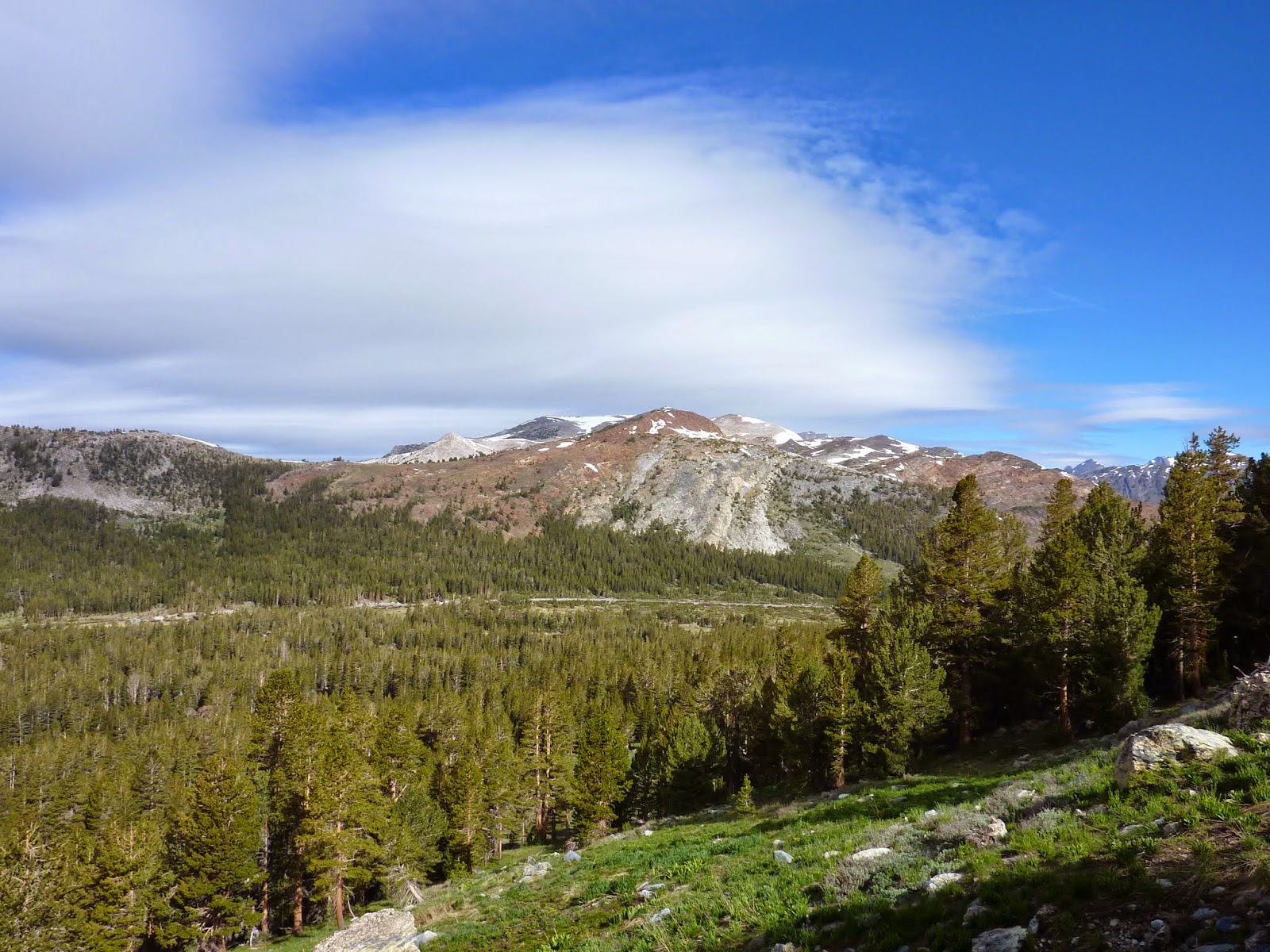 Back at the car I had initially debated whether to bring my gore-tex jacket thinking perhaps it not necessary on this straightforward hike.  It certainly wasn't going to rain!  But the wind even at the pass convinced me to bring it and I was glad I did.  I threw the jacket on after tree-line and even with it on I quickly grew cold in the wind.  Thankfully I had gloves and even they weren't enough to help with warmth.  At one point I literally had my right pinkie finger growing numb which forced me to keep wiggling fingers and ducking them in pockets and inside my jacket for warmth.

Knowing this was a very low snow year (33% of normal in fact) we had initially not expected to hit any snow on the trails this year.  However, we had gathered from some internet forums some recent trail beta that there was snow existing on the high peaks at this point in June still.  As we drove over to Tioga Pass from Tuolumne Meadows this morning we could also spot some high snow patches on Dana so we brought microspikes along just in case they became necessary.  On the slopes around 11,500 we encountered the first of a couple of snow patches we would either cross or divert around.  None of them were on steep slopes and so we didn't even bother to get our microspikes or any other traction devices out to help.  In fact, the only concern the snow made for us today was the potential for getting shoes wet as it softened on the afternoon down hike. 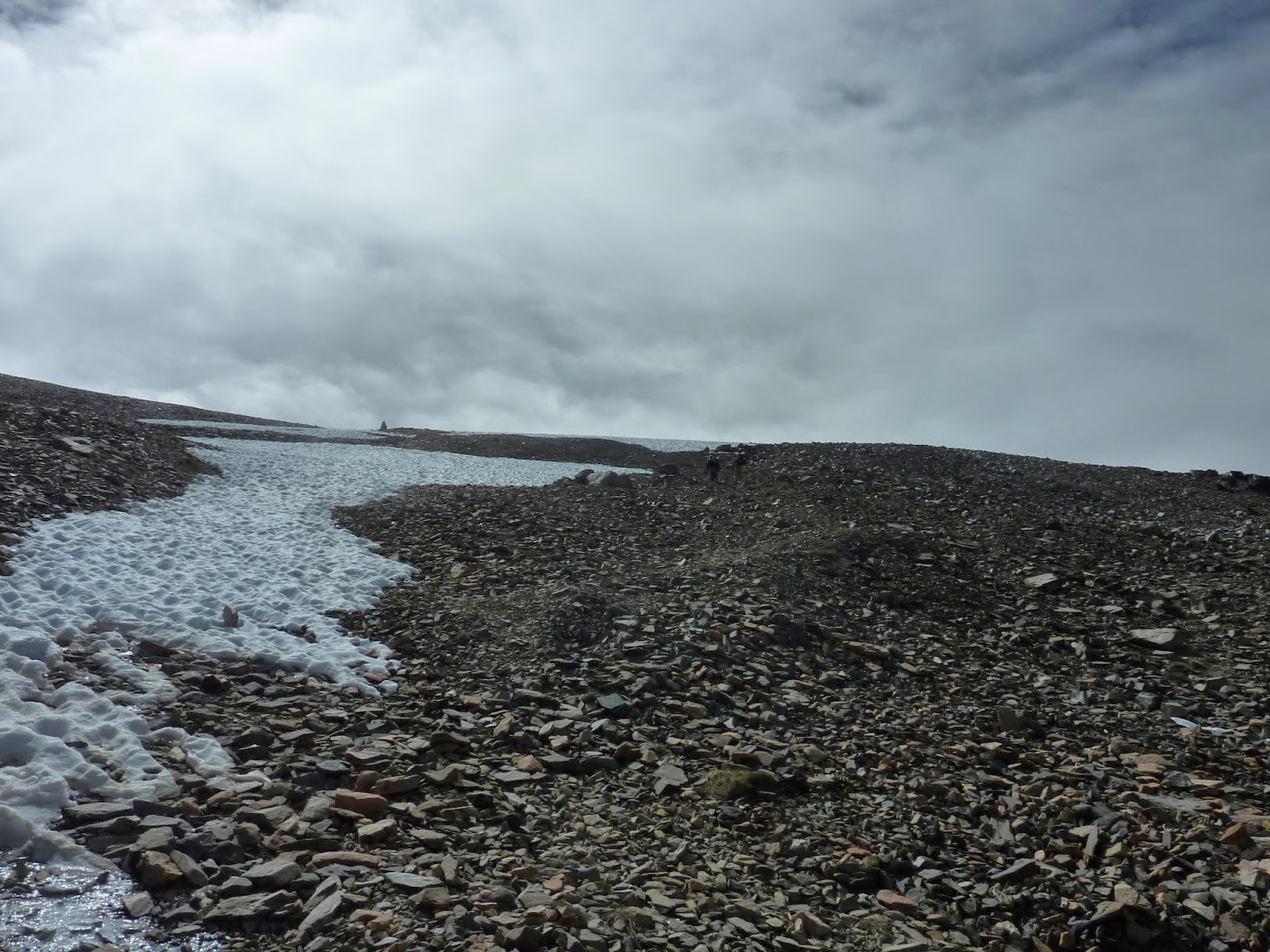 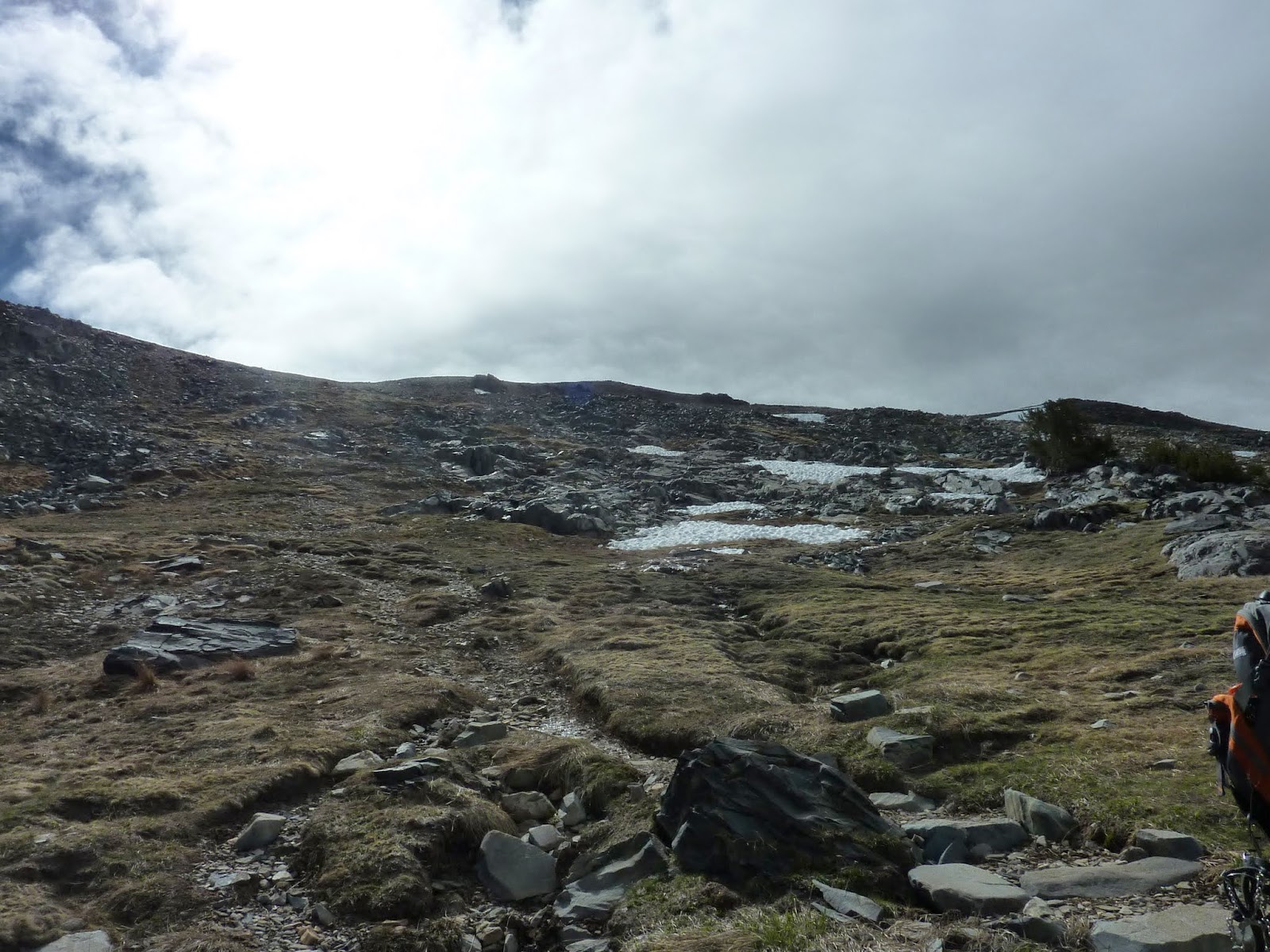 Brief looks at the terrain.  You can see the existent but not troublesome snow 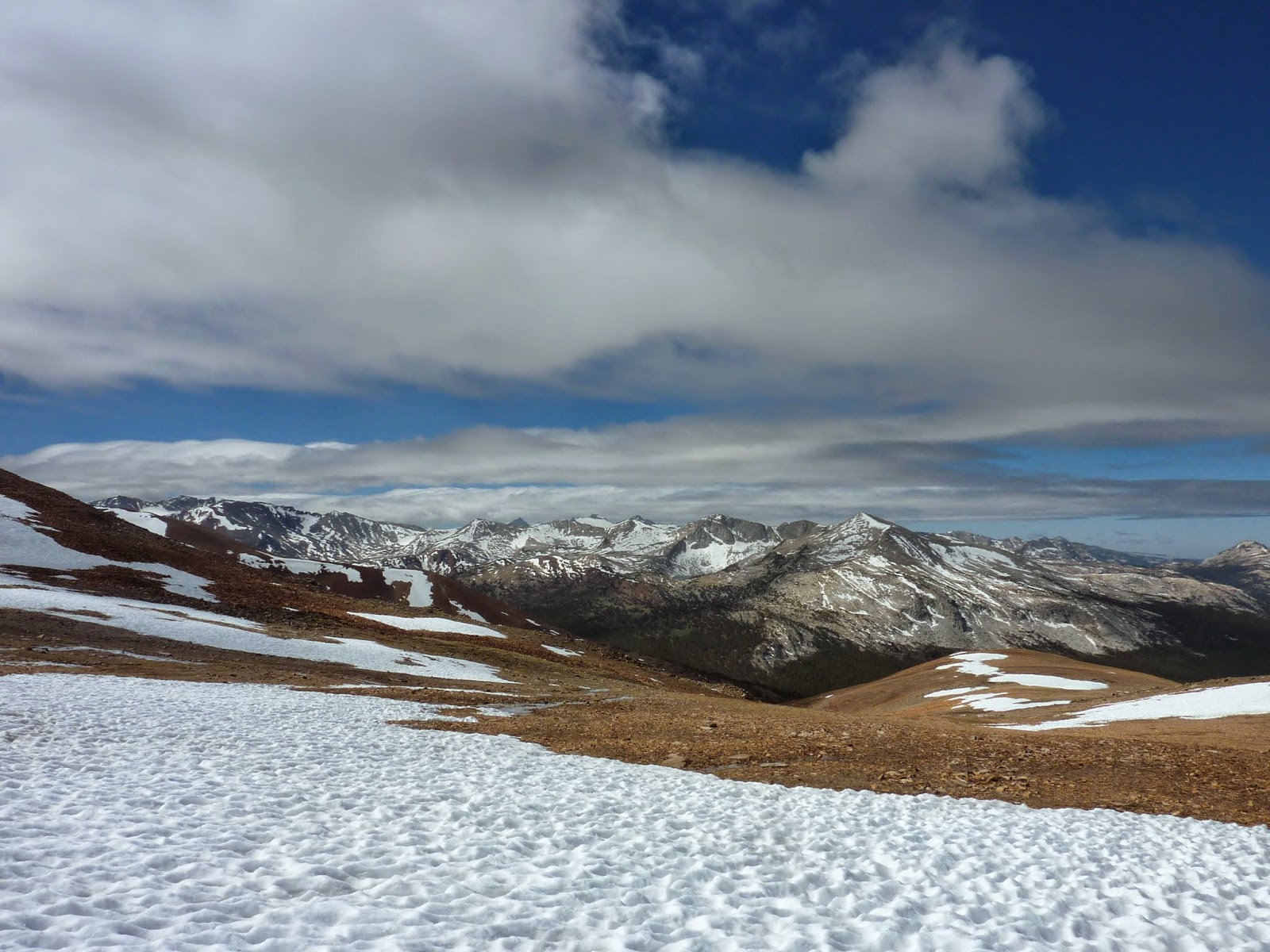 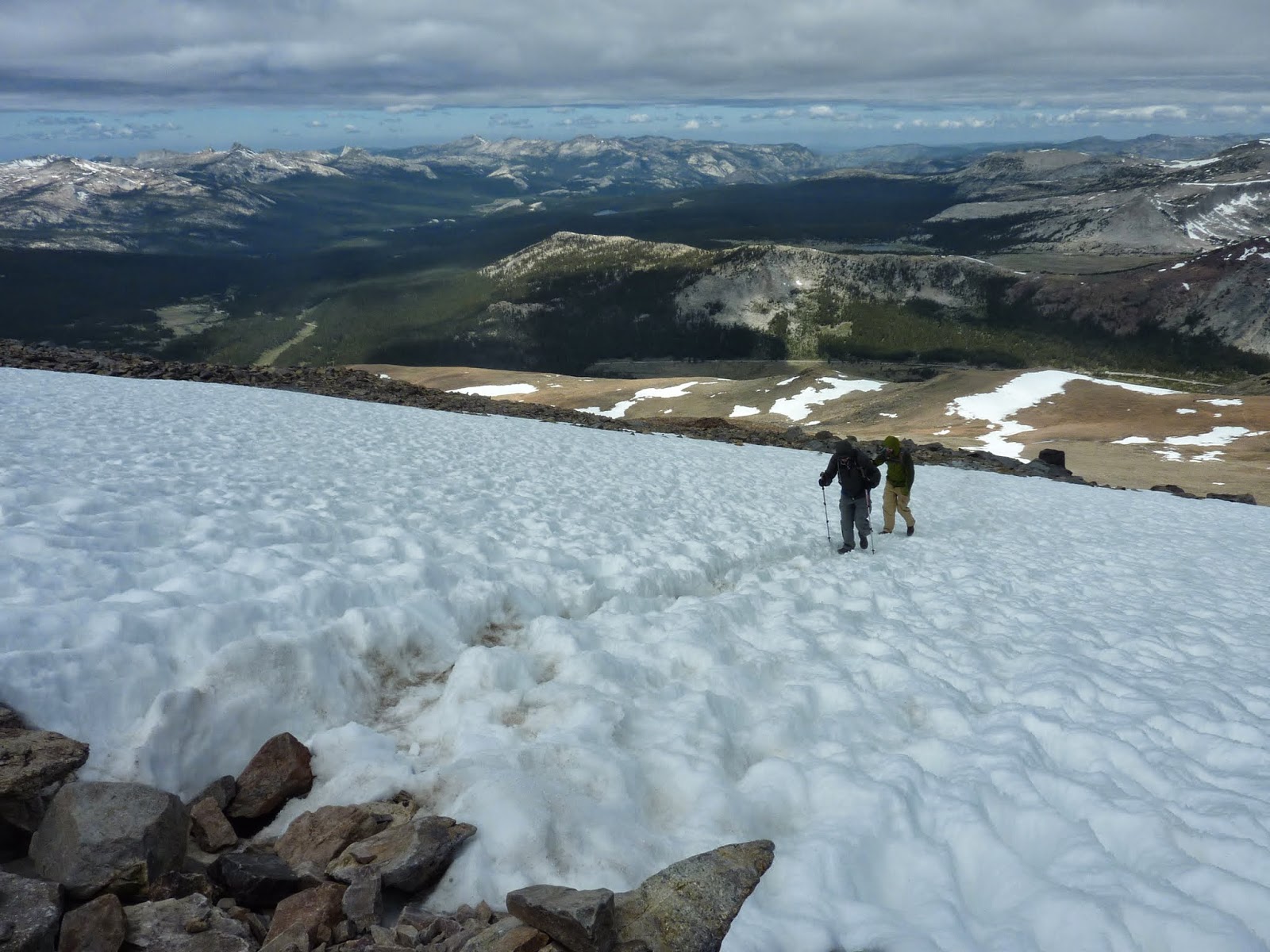 Above the snow at 11,500 the trail works through a more gradual plateau like area before hitting the 1000+ foot summit push.  The wind was relentless through here and we began to grow weary of its constant presence.  We worked with a fairly slow pace today with it being our first day of acclimation.  We took frequent stops to ease our way up the mountain.  I never felt any altitude myself this first day.  I wonder if a body gets used to acclimating over years of going at it.

The push up the final 1000 feet involved short switchbacks that worked there way up the western scree slope of Dana.  Much to our delight there was a clear trail all through the rocks to the very summit.  There was minimal route-finding involved which just entailed following the path of least resistance through the rock. 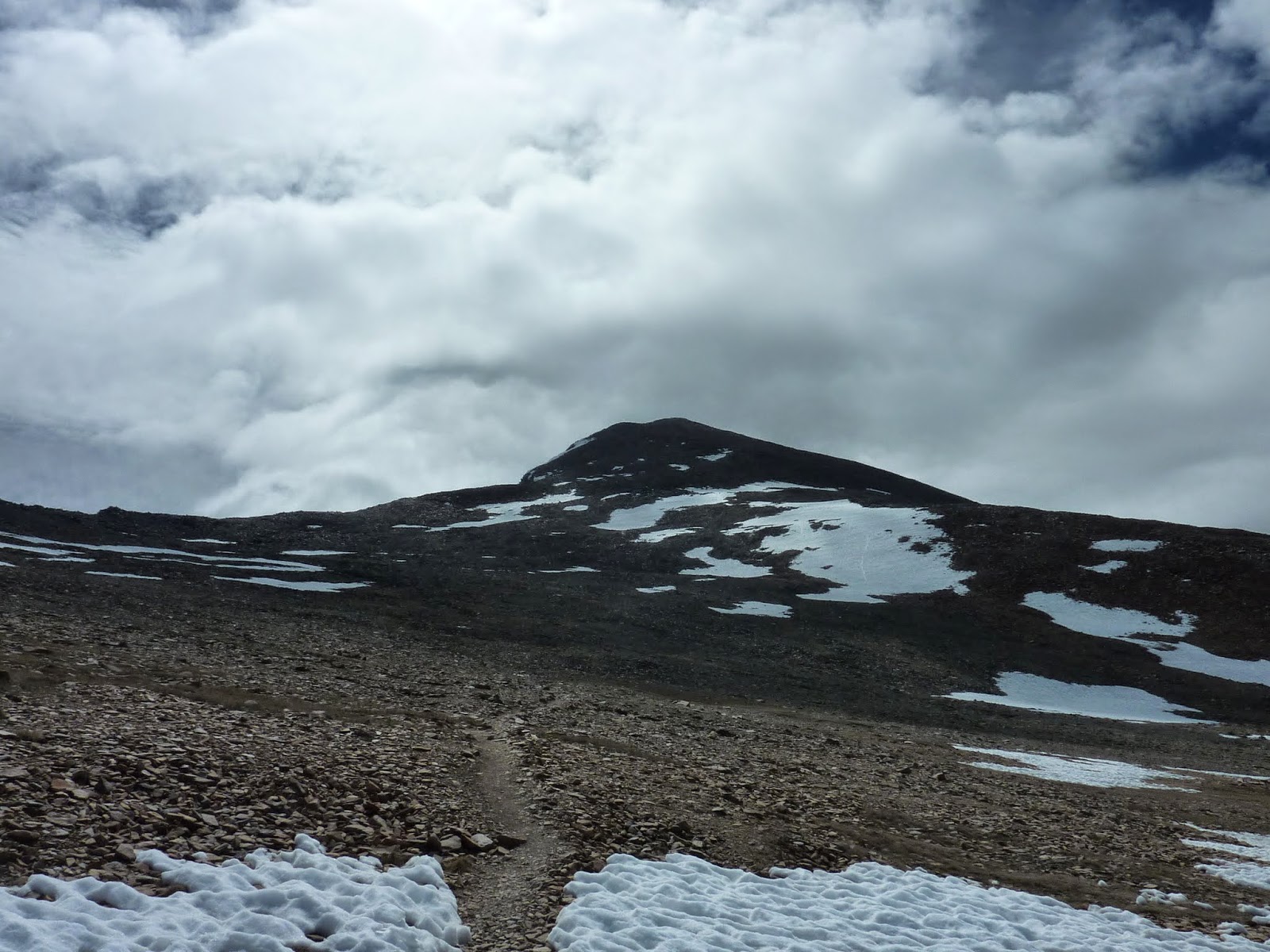 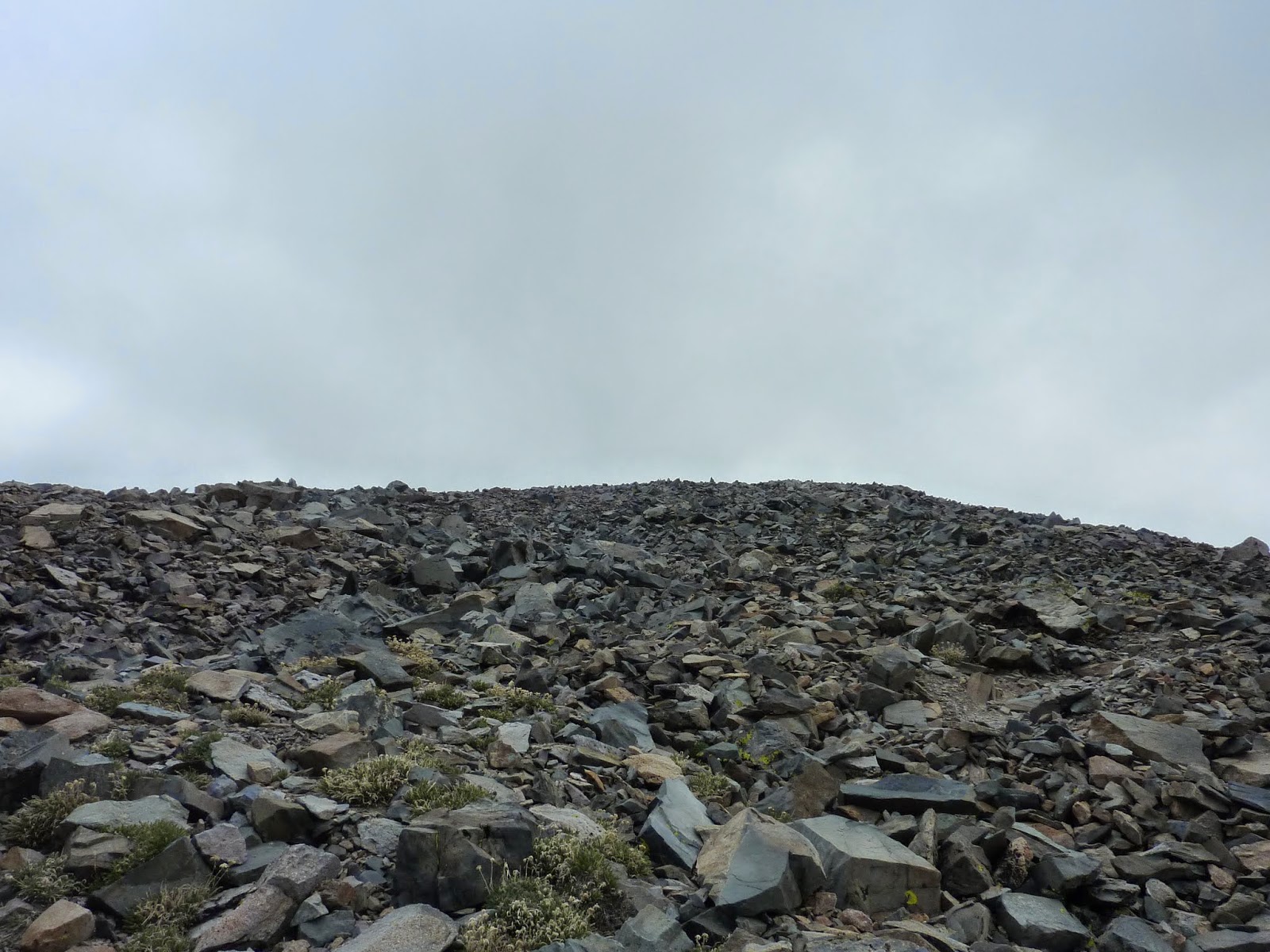 We summited around 11:44am which put us at just over 3:15 on the ascent.  It goes without saying, that the wind was still hitting us hard up top, though not quite as bad as at other sections of the hike.  It kept our stay on top to about 15 minutes.  We did spend time enjoying the views and celebrating the summit.  For my friend Ken, this was his first summit above 13,000 ft.

One of the reasons we had chosen to hike Mt. Dana in the first place was the great views it would have.  To the northeast from the summit we could see Mono Lake and the Lee Vining area. To the northwest is a series of 12,000 foot summits and Saddlebag Lake.  To the south and southwest is the amazing Cathedral range including the high summit of Yosemite Mount Lyell.  And to the west are the wonderful Tuolumne Meadows.

The descent went without incident.  The snow had indeed softened some but it was hardly an obstacle to be concerned about.  We were pleased we didn't have to deal with potentially worse snow conditions.  Most of the descent was spent with the eager anticipation of returning to the trees and finding relief from the relentless wind.  With our upcoming hikes later into this week we were concerned about the potentially windy conditions following us.  As time would tell, thankfully, this would not be the case.

I have Tracks and waypoints from our hike all contained in a KML file that you are welcome to download and use (at your own risk):