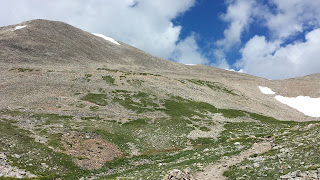 With a day remaining on our trip out west I didn't want to let any good morning go to waste. I decided I wanted to get one more summit in and my legs were feeling good for it. With all of the marathon training I've been doing back home I've been itching for opportunities to test out my limits. Last year on the final day of our trip I went up Quandary first thing in the morning to see how well I could push the pace. This year I decided on the Lincoln-Bross-Democrat combo hoping to see what the loop would be like when I'm moving along quickly. The rest of our group was already on the road heading for the Midwest and so it was just Sarah and I. She was gracious enough to indulge my hiking need and said she would be happy to enjoy the Kite Lake area while I went for the summits.

Leaving from Buena Vista in the morning and driving up through Fairplay, we found the Kite Lake road just fine out of Alma and the first few miles of it were pretty decent.  The road has a few bumpy areas which get progressively more as you progress on.  We debated whether we would find some 2WD vehicles at the trailhead and sure enough we did.  The last half mile gets really bumpy and some bigger rocks and holes are in the road.  I was a little surprised any low clearance vehicle would make it to the end of the road.  There was even a red mini cooper parked along the road in the final stretch. 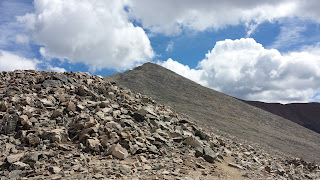 We made it to Kite Lake at 10:35am and found ourselves a spot in the parking lot.  Some clouds in the area but the weather looked promising at least for a few hours.  I decided to hit the trail and to just go for Democrat since the hour was starting to get late already. I was off at 10:41am.  I took a radio with me so Sarah and I could converse. She would stay in the car and enjoy some peace and quiet.  I started off with a slow jog across the creek and through the initial meadow.  As the trail began to climb I quickly slowed down to a quick hiking speed.  I was out of breath pretty quickly and found myself struggling to keep breath for awhile.  I passed a few people who were still ascending and would continue to bump into even more people coming down.

As I gained the slope approaching the saddle I finally slowed a bit for a pair of stops to catch my breath for a moment.  The quickened pace was just catching up to me. I was still making 2-3 mph but just couldn't go any faster like I had anticipated.  I made the saddle at 11:11am after 30 minutes of going and gave Sarah a quick update on the radio.  I also put in some more calories from my pack.  I was doing this hike with my Osprey Rev 6 running pack and it worked perfect.  After the saddle I passed even more people now on the way up who were making their way through the rocks.  Around 13,800 we found a snowpatch that seemed to be covering up part of the main trail.  Folks were heading up hill through the rock right next to the snow.  There still seemed to be some semblance of trail in the rock here so it was hard to tell how much of the normal trail the snow had covered.

At 13,980 the trail crests out into a flat saddle and this area was mostly all snow covered.  A quick walk through the snow patch revealed a final clear area before the last 100 feet to the summit.  It started to get windy up here and so I kept moving to stay warm.  I had only been wearing shorts and a long-sleeve tech shirt.  I summited at 11:41am exactly 1 hour after leaving the trailhead.  I spent 7 minutes on top calling Sarah on the radio and talking to a pair of nice guys about what peaks we were seeing from the summit.

As I started down I kept a slow jogging pace hopping down through the rocks.  The terrain would slow me down to a “careful” pace at points but otherwise I was making time.  The cardio limitations were not an issue on the way down so I could go about as fast as terrain would allow.  I passed a whole slew of people on the way down.  The weather was deteriorating some as I descended so it was likely the right choice to have foregone the rest of the trio for today.  As I made it back to the meadow I broke into a quicker jog and finally made my way out to the parking area.  I made it back at 12:28p which was a 40 minute descent and as I hopped in the car some sprinkles started to hit.  It didn’t break into a full shower but it was probably good to be down.  This was the 2nd year in a row I did a peak solo at a trail-runner’s pace and it was quite enjoyable.
Track:

I have a track and waypoints from the hike all contained in a KML file that you are welcome to download and use (at your own risk).  This only contains the track for my ascent.  I didn't start my GPS and so do not have the descent track.