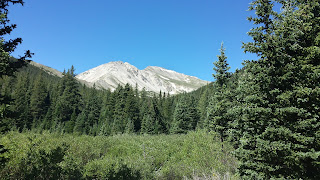 Looking for another great hike near our rental house in Buena Vista we realized that just a simple drive up the road would find us some wonderful trail. We were staying along County 365 in the GameTrail subdivision and it came to our attention that the Colorado Trail had trailheads just up the road from us. We did a little bit of reading on this and found that the hike out of the Silver Creek trailhead would give just the morning hike we were looking for.

So we drove up the road from the rental house and before long we had hit the Silver Creek Trailhead for the Colorado Trail.  This trailhead did have restrooms and were the only ones back on the road. Not even the North Cottonwood Creek trailhead had them.  It was my father Denny and I making the hike, I just couldn't talk any of my younger boys into going this morning. We hopped onto the trail at 9:53am thinking perhaps a good mile or two would do it.  I had some aspirations in mind that if things worked out I might try for the saddle on Yale’s East ridge. Some places had listed this as 4 miles to the ridge but the map at the trailhead and my own map made it look more like 3 miles. 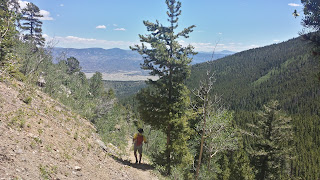 The trail initially wound through the woods a bit and then slowly began to gain more elevation.  About ¾ a mile in we got a call from my mother (surprisingly we did still have cell signal) that my Grandmother was leaving with my Aunt and we debated whether we needed to head back to say good bye.  It seemed the group mutually decided it wasn’t necessary.  So we pressed on.


Not long after our phone conversation we began the steep ascent portion of this hike. The trail starts climbing laterally on the south side of a ridge and continues to do so, running almost a straight line for a mile.  It gains about 1100 feet in this time.  As the trail finally started to mellow out again in a wooded area Dad offered to let me move ahead to see if I could make the saddle.  He would likely go to about the 2-mile mark and then turn around.  It was 11am or so at the time.  I told him I would probably turn around at 11:30 or 11:40 whether or not I had hit the saddle. 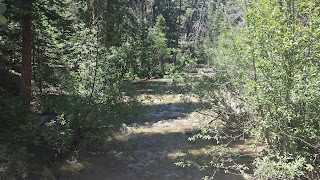 I pressed on and moved pushing the pace.  I broke into a few moderate jogs when I had flatter portions.  I passed a man with a backpack as I proceeded nearly scaring him.  At about 2.2 miles in I passed through a beautiful open meadow which opened up the views to Mt. Yale.  You could see the better part of Yale’s east ridge and it shows how much longer a hike that would be than you’d first think.  After the meadow the trail begins to climb again and I just worked to continue pushing the pace.  11:30 came and went and I knew I was pretty close to the saddle to I pressed on.  I finally hit the saddle at 11:41am.  It had plenty of trees on it and so I was disappointed the views didn’t open up more.  I did find the turnoff which was well marked for the Yale East Ridge trail.  There was a rock cairn and some arrows made of rock and wood point west up the ridge.

I spent only a minute there and then started the trot downhill.  The saddle was at 3.3 miles in.  I made pretty good work heading down the trail and was cruising along.  At about 2.8 miles in, now 0.5 from the saddle, I ran into Dad who was still coming up trail.  He said he hadn’t heard from me on the radios so he pressed on.  I had tried to call on the radio several times above the saddle but I think we finally deduced his volume was way too low.

We started the long hike out.  Along the way we ran into a trio of different thru-hikers who were doing the entire Colorado trail. It was interesting to share information with them and get a bit of an inside look into what they were doing.  It would be a blast to attempt the Denver to Durango hike someday on this wonderful trail.

The rest of our hike out mirrored the hike in and we were back to the trailhead at 1:15pm.  We headed back to the rental house then for a late lunch of various leftovers. We were definitely hungry after this workout!