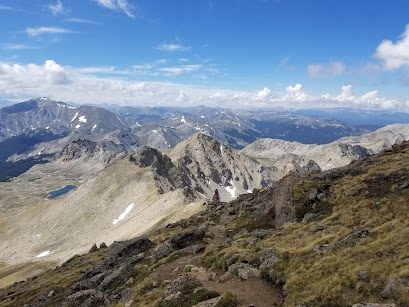 
Trip Report:
I've had my eye on a return trip to Harvard in recent years. I first climbed it in 2010 with my friend Matt when we did the Harvard-Columbia traverse from our campsite in Horn Fork Basin. I instantly fell in love with the area. I wanted to change the route up slightly this time. I had read good things about the Frenchman Creek approach and decided to make a scenic up-and-over route on Harvard to keep things fresh. With all of this being relatively close to my folks place in the BV area we had an easy way to get vehicles in place for the two trailheads we'd be using.
My father drove us to the 4WD road that leads up to the Frenchman Creek TH. He had been up this way a week or two prior to scout things out and so he knew the beginning part of the road fairly well. He drove us up a mile or two on the road until we hit an area he knew had some larger rocks in the road. We decided this was as far as the old Ford Explorer would take us and so we were dropped off. We hoped this would put us fairly close to the end of the road.
Temps were around 48 degrees when we got going. I was in long sleeves and pants and felt pretty good. My son Luke had missed my memo on long-sleeves and was in short sleeves. He quickly donned his jacket. My brother David was our third companion for the day. This was my son Luke's biggest day yet in terms of mileage. He impressed us two years ago with a 10.4 mile, 11 1/2 hour day summiting Mount Yale in winter. He's even stronger now. He kept up with my brother and I wonderfully and proved himself up to the endurance challenge. He even got his first taste of class 3 scrambling, but more on that later.
About 0.75 miles in from our drop-off point we passed the signage for the Frenchman Creek trail and believed this to be the true trailhead. It wasn't the end of the road though. We hiked further into the woods finding the road to be fairly rocky but entirely passable by any 4WD vehicle up to this point. It was another mile at about 1.7miles in that we finally hit the end of the road. We had already climbed up 1000 by this point. The temps had dropped down to 39 degrees on us which gave us plenty of motivation to keep moving.
My son Luke pointed out that his least favorite style of hiking was the "in-the-woods" hiking where the scenery doesn't change and everything looks the same. He has a fair point to be made in that. For us today this made the alpine hiking all the more enjoyable when we would get there. But to be fair, we did enjoy the changing nature of the forest through Frenchman Creek shifting from coniferous to aspen and offering different looks along the way.
We were three miles and 1:26 in when we hit the junction with the Colorado Trail. It was obvious and well signed. It was another 1.25 miles in the trees until we reached tree-line. There was still some good altitude gain in here but all of it was good trail. It was around 11,800ft. that we hit treeline. We rounded the corner of a hill around 11,950 and were greeted with views of the eastern slopes of Harvard and the traverse over to Columbia. About 3/4 of a mile after hitting tree-line is where the trail finally ceased. It began to grow thin through some willow bushes but still followable. It ended right before a small rock slope where your alpine "bushwhacking" and route-finding begins.
The first route-finding question comes with how to ascend the terrain between 12400 and 13000. This area is seen in the photo below this paragraph. We knew the summit was not in view from here but based on the maps was somewhere center ahead out of view. The steep grassy slope right of center in the photo looked a bit steeper and more of a grunt than we wanted. To the left of center appeared to be a less steep grassy slope leading to a bench. This would make for an easy traverse to get up and over. We started heading towards that ascent path until we found ourselves almost completely cutoff from it by thick willows. You can kinda see this in the photo below. We ending up ascending to our right and gaining the steep grassy slope. We did some zig zags on it and found it really wasn't too bad after all.
We saw in trip reports from other hikers that when it comes to route-finding these eastern slopes of Harvard there are a number of ways to attack it. We ended up using mostly the southern ridge of the slope to ascend. We saw others who used the ridge on the northern end of the slope. It would appear that path also works. We trended toward the southern ridge as that put us in the same line as my track from 2010 when I did the Harvard-Columbia traverse. It was somewhat familiar terrain for us. We even ended up bumping into two groups descending from Harvard and heading for Columbia.

The next photo is from around 13,400. Its just before you hit a saddle area on the left which gives you your first views towards Horn Forn Basin. It was quite a beautiful area. If you'd been following the north side of Harvard's east slopes you'd probably be on the ridge on the right hand side of the picture. Our route would end up taking us up a slope on the left border of this photo. Its fairly easy ascending through here and on a mostly clear trail again.


The summit ridge involves a couple of false summits and mostly class 1-2 hiking to make progress. One of the bumps on the ridge involved just a bit of light class 2/2+ scrambling to maneuver around the large talus. The only "crux", if you'd even call it that, is actually in the last 100 feet to the summit itself.
At around 13,900 is the grassy spot on the ascent and makes for a beautiful photo spot.


The following photo gives a pretty good look at what the summit ridge looks like. While this was taken from the Frenchman Creek approach, there is a small bit of similar terrain to gain the summit from the Horn Fork Basin approach as well. The summit area is the tall bump in center of photo.

We took 4:39 (10:26am) on the ascent which was just a hair longer than I had predicted, but still felt like a good time. We all felt good with our bodies thus far. I was really impressed with Luke who kept up with my brother and I very well even though we were far more experienced. He was every bit as strong and fast as us. His biggest challenge was the altitude was we were over 13,500 or so. It slowed him a little bit and gave him a light headache, but he managed very well.
We spent 24 minutes on top taking in the views and had the summit to ourselves for the first 15 minutes or so. The weather was holding wonderfully today with the clouds remaining non-threatening all the way on our ascent. The temps on top were upper 50s with almost no breeze so incredibly comfortable.
We watched a solo hiker come up to the summit and join us eventually. I made the slight mistake of not paying attention to his whole approach. The one very minor concern, other than weather, I had for today was getting off the summit area without a hitch. It was the one challenge I remembered from 2010 and I had never descended that route. As it goes with big mountains like this, there is always challenge in descending a route that is unfamiliar. In our case today the route was *somewhat* familiar. I had ascended it in 2010 only then to descend via Columbia. The vast majority of the route is straightforward trail except for the summit area.
Nonetheless, we carefully began looking for the easiest route off the summit. My brother and I split slightly on routes trying to find the easy way. Luke followed me. Well the route I had taken quickly turned into beginning class 3. It was on good rock and I could see our path out without getting cliffed out. I asked Luke how he was on it and he appeared confident so we proceeded forward. We probably only had to descend 30 or 40 feet through this but it was an area where a fall would provide major injury. Luke did wonderfully with it and when we finally reached easier ground and rejoined my brother he proved to have enjoyed his first taste of class 3.
From there on out the descent was very straightforward through Horn Fork Basin. As always we just took in the beautiful trail through this area. We talked to a number of groups on the ascent. One was a 20-somethings group who were tackling their first 14er. We applauded them on tackling a not-so-easy first attempt. The clouds did get increasingly darker as we descended but it never rained on us. We met a group of folks in their 60s hiking with fishing gear up to Bear Lake and then a backpacking group down on the N. Cottonwood trail looking for good camping. We noted some beautiful camping spots just before the Mt. Columbia trail which we suspected the CFI group may have been using for their big camp during construction on Columbia.
In the end this would prove to be a home run of a day. We had fun, we felt good, we enjoyed the time together and we got a beautiful summit. I think this means my son Luke might be joining us on many more of our big climbs to come. 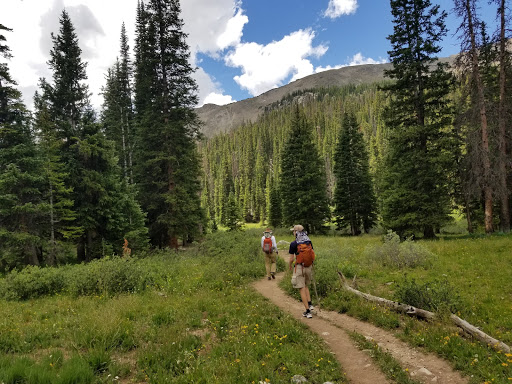 Track:
I have a track and waypoints from the hike all contained in the embedded Google Map. Check it out and use at your own risk.
Labels: 14ers Colorado Hiking Trip Report