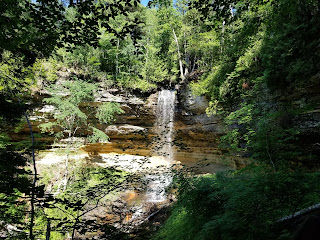 
Trip Report:
If you make it to Munising in the Upper Peninsula of Michigan then it is well worth making the short journey to see Munising Falls. In fact there are at least a dozen different waterfalls to see up in this area and this might be one of the best of them. The trail starts at a visitors center for Pictured Rocks just east of the town of Munising. 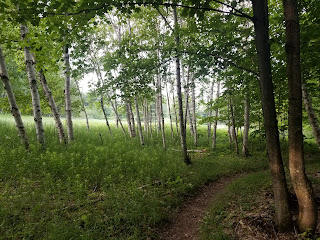 The trail is actually quite short and all paved. It is perhaps a 3/10 of a mile walk to the base viewing area. From there is a staircase to a higher viewing area closer to the falls. Also, along the walk out there is a second break-off trail that leads up to a second higher viewing area up by the falls. All of them are worth taking a look. The falls are in a narrow and shallow canyon of sorts with cliff walls on both sides. This wreaks havoc on GPS signals and mine was crazy too.
Also leaving from the Visitor's Center area is the North Country Trail. It leaves from a different spot than the Munising Falls trail but they are only about 30 feet apart and signed. The morning following our family hike up to the falls I got up at sunrise and start out hiking/trail-running on the NCT. I set out to hit four miles. I had considered running all the way out to Sand Point if time allowed. The trail gains upwards on the hillside until leveling out somewhat in rolling hills. A couple of surprises greeted me along the way. The first of surprises were two waterfalls. They weren't as notable as Munising Falls but were unexpected nonetheless. They were also in cliffy canyon areas to the west. Neither were really noted on the maps but I grabbed waypoints on my map below. The second surprise was a deer. He heard me coming and bolted off the trail about 20 yards off but stopped to let me greet him.
The trail was in mostly good condition. Some muddy spots with other spots having short boardwalks installed over them. I saw new planks piled in a couple locations where it looked like either new boardwalks being added or old repaired. It was pretty muggy due to foggy conditions over Munising Bay and the mosquitos were out and after me when I would slow up. I still look forward someday to doing a backpacking excursion with my boys through the Pictured Rocks section of the NCT.

Track:
I have a track and waypoints from the hike all contained in the embedded Google Map. Check it out and use at your own risk.
Labels: Hiking Michigan Running Trip Report
Location: 1505 Sand Point Rd, Munising, MI 49862, USA