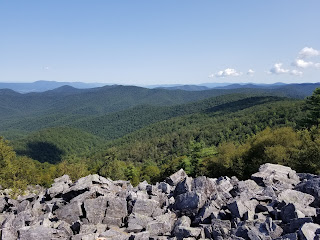 
Trip Report:
The Blackrock Summit loop is billed as one of the great short and easy family hikes in Shenandoah National Park. The loop is just over a mile, is fairly easy in elevation gain, and is wonderful with the scenery and ability to scramble on rocks. For us this checked all the boxes. 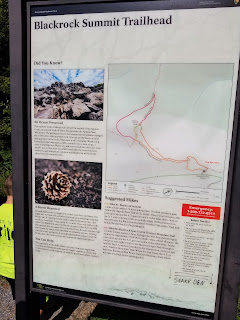 The Trailhead is one of the many well marked trailheads along the Skyline Drive in Shenandoah. If I recall it was at mile 86 along the drive. The parking lot actually has two trails leading from it which is what helps to make this a loop hike. The double track coming into the southwest side of the lot is mostly a service road that forms the south half of the loop. The single track leaving from the north end is the Appalachian Trail which is followed to the west. This is a great easy hike on the AT to the obvious Blackrocks Summit area. The AT loops around the Blackrocks area allowing you to climb into the rocks as you please.
While we were up in the rocks exploring we heard a woman call out for help. Her husband was passing out and starting to slump over. She suspected it was a blood sugar issue. He was in a seated position slumping with his wife holding him. He had three kids in the near vicinity as well. I started to make my way over there and another gentleman who happened to be a nurse was quickly with them too. The other gentleman had some chocolate which he tried to share with the man. The other guy ended up helping hold the man up so he didn't hit his head on the rocks. The wife got on the phone with the park service to prepare a call for help. The chocolate did seem to help revive the man who quickly began talking and gaining some strength. He was sitting up now and saying he wouldn't need a rescue. We all waited to see how his leg strength would be. I stayed close in case I would be needed to physically assist. Eventually it was decided no rescue would be needed and he insisted he could hike out on his own power. I departed and the other gentleman returned to his family as well. Last we saw it appeared he was safely hiking out of the rocks back to the AT. 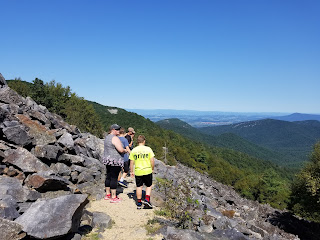 When we returned to the trail the excitement wasn't over. The others in our group had found a rattlesnake just off the trail. He even rattled his tail once when he sense another hiker with a dog nearby. We kept a safe distance and snapped some photos.
We followed the AT around the Blackrocks to a four-way junction. This junction took some care to figure out the right direction and it felt the signage there wasn't abundantly clear. Naturally it would seem going straight for us would have made sense but that wasn't right. We had to make a left turn here. Straight would have kept us on the AT and eventually heading southwest. After the left turn the trail straightened out heading east back to the parking lot. At the parking we ran into a park ranger asking if we had seen the distressed hiker. I updated him on what I had observed and said we hadn't seen him on the service road and he was likely descending on the AT portion of the loop. 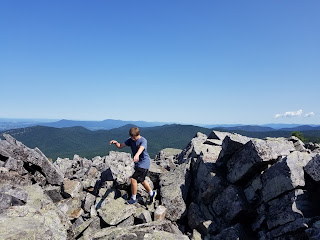 This loop was everything it was billed to be. Easy, short, and yet definitely enjoyable with views and fun rock scrambling. 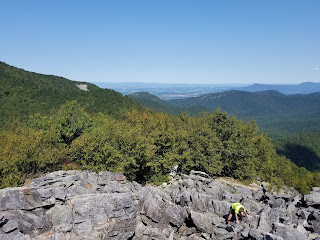 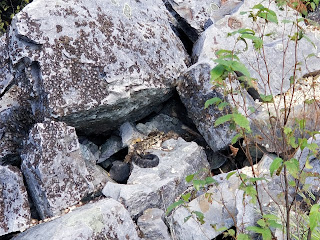 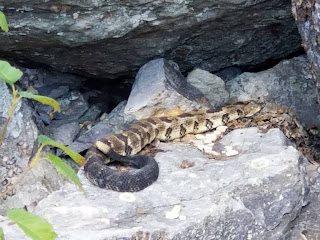 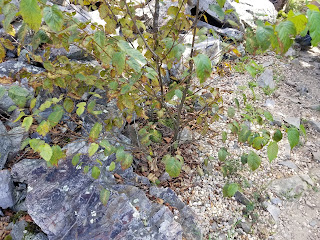 Track:
I have a track and waypoints from the hike all contained in the embedded Google Map. Check it out and use at your own risk.
Labels: Hiking Trip Report Virginia
Location: Browns Gap Rd, Grottoes, VA 24441, USA