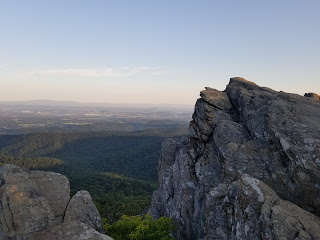 
Trip Report:
This hike didn't show up in our original plans for Shenandoah National Park and neither is it in the park. However some local searching for other trails for a morning trail run quickly turned this up as a great option. Its not so much a hidden gem as it appears it is a quite well used trail by locals and others alike. I was glad to have found it and given it a try this morning. 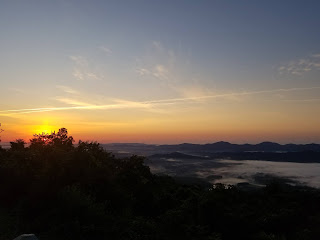 I wanted to get this in before the rest of my group was waking up and starting to take down camp. Today was our get-away day to drive home. I made it to the easy to find trail ahead around 7am and found a dozen cars there already. The parking was 3/4 full. I can see how this would be overcrowded at midday. There is an obvious trail leaving from the south end of the lot and quickly heading up hill. Its heavy use is evident by the wide, nearly double track trail. It was heavily eroded from water run-off coming down the trail and the support logs were even eroded out from underneath. I had read this trail gains elevation quickly and it did. Not much switchbacking at first and it really works up the hill. I passed a couple groups on their ascent and a couple more heading down already. I was definitely not alone in thinking of getting this early before even bigger crowds. 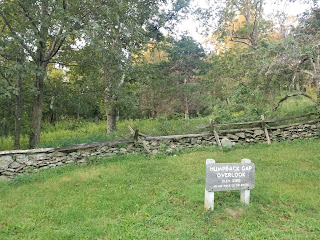 About 0.6 of a mile in the straight steep climbing turns into staircases and small switchbacks and the trail becomes less flat singletrack and more of a mountain trail. It continues the swift climbing but is just as swiftly over with and leveling out. The trail begins to wrap around to the north and then hits a junction with a connector trail that heads south to the A.T. I would use that later on my descent. 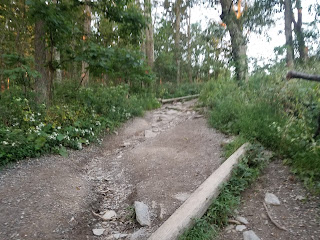 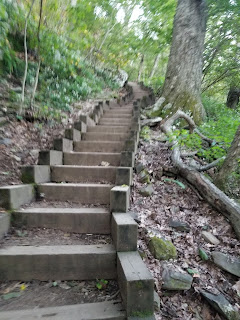 Not much further from the junction, with a small bit of descent, I gained the Humpback Rocks summit area. It had views that lived up to their billing with near 360 degrees of sights. 7-8 people were up there with me. The morning skies made for some great shots. 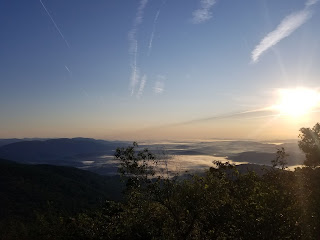 On my descent I actually had to climb for a bit. I returned to the previous junction and then headed south on the connector to the A.T. I had contemplated heading up to the Humpback Summit another half mile south and then descending my entire route. But I opted instead to do what they call the Humpback Loop. Ascend the main trail and then descend the 3 mile section of the A.T. which loops back around to the parking lot. 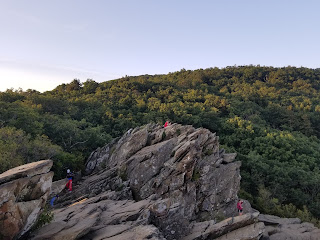 The A.T. portion was great trail of course and had large switchbacks that descending down the east side of the ridge. I was evidently the first one through this morning as I encountered a number of stringy spider webs along the way. I was able to trail run most of this to make some good time and enjoy it. At the very bottom of the descent was one more junction. The A.T. heads to the northeast while another small spur trail heads back to the parking lot. It was a short climb on the spur and then it gained the northeast end of the Humpback Gap parking. 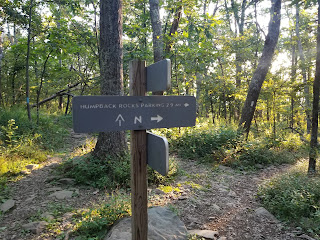 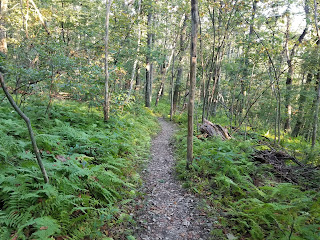 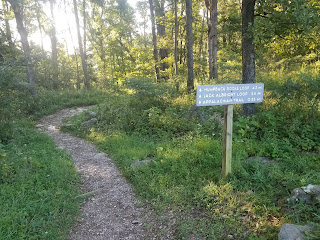 Track:
I have a track and waypoints from the hike all contained in the embedded Google Map. Check it out and use at your own risk.
Labels: Hiking Trip Report Virginia
Location: Humpback Rock, Rockfish, VA 22920, USA