Mount Sneffels is a mountain I've looked forward to for years now. As far back as 2007 I've been making plans to find my way to its beautiful summit. In 2007 we were hiking in the San Juans for the first time in many years and we started on the easier ones like Handies, Redcloud and Sunshine. After summiting all 3 of those my brother had to head back home. We dropped him off at Albuquerque's airport and then were back in the San Juans. My father and I made plans on Aug. 6 to hit Mt. Sneffels and were geared up that morning and in our minivan heading for Yankee Boy Basin. The weather that day wouldn't cooperate for us however. We made it just a few miles up the Camp Bird road and found it washed out. We ran into a road work employee who said he could possibly get it open for us but it might just as likely close up again. Given the poor road chances, as well as the poor weather risk up high, we had to bail.

Skip forward to 2011. Again we were in the San Juans and this time we found ourselves in Chicago Basin. We had a jam packed week of hiking planned. On Monday we hit Loveland Pass and its 13ers for acclimation. Tuesday through Thursday we tackled Chicago Basin and my brother and I hiked all 4 14ers. We hiked and "trained" out on that Thursday evening. And just like that, we were mentally exhausted. Perhaps physically exhausted as well. We had originally made plans to hit Mt. Sneffels on Friday 7/22 but we bailed again. Another year perhaps.

2013 found us in the San Juans one more time. We actually had aspirations of making this our last time. We made plans for both Wilsons, El Diente, Sneffels, and at a long shot, Wetterhorn. If we could get both Wilsons in a day and have weather and everything else cooperate, we could get them all. Well we were unsuccessful on the getting both Wilsons in a day part so we had to bail Wetterhorn. However, we did hike both Wilsons on successive days and that alone was an accomplishment for us. Sneffels then came into our plans once again as a "rest day". After putting up 11+ and 9+ miles on the Wilsons the shorter sub 6 mile hike of Sneffels looked enticing. We stayed in Montrose the evening after Wilson Peak and in the morning we made the drive into Yankee Boy Basin. What a drive!

We made it up to the lower trailhead which was about 7.7 miles in. We drove past that initially and passed the big rock mentioned in the route descriptions. A hill began after that and it already had some large difficult rocks. We decided to just park the Explorer back at the lower TH. We used the bathrooms there, which had a terrible smell because of the biological waste management they were using, and hit the road/trail about 7:45am. As we walked up the road we found one more pretty difficult section just after the point where we turned around. Other than that the road likely would have been passable, possibly to the upper TH with our Ford Explorer. We didn't regret the walk however as the views were spectacular the whole way. 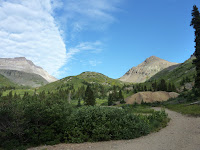 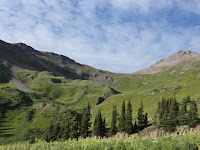 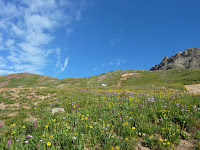 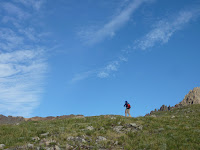 It was about 8:45am when we hit the upper TH. We talked to two groups there who had passed us on the road on the way up. One was a guy with 3 gals. They seemed at least my age if not slightly older. The other was a younger guy with two younger girls, they may have been around 20 or so. We found out from them in talking after the hike that the guy works at a state park near Moab and the girls may work with him there. The other two groups left before us though we caught and passed them in the lower gully. 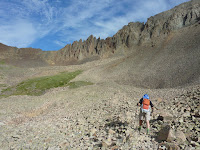 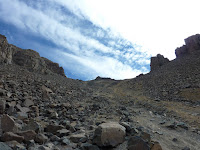 The trail from the upper TH was great. It ran mostly through rocks but was very well constructed and easy to follow as it traversed the upper basin over to Sneffel's lower gully. As we entered the lower gully the trail was still fairly easy to follow. That would quickly change. It didn't take long til we realized there were trail segments all over the place. So we pretty much had to construct our own route. In the middle of the gully there was a widening steep dirt patch that eventually ran all the way to the saddle. We knew we didn't want to be in this loose and steep dirt. So we worked dirt & rock trail segments on climber's left up the gully. As we worked up the gully it gradually got steeper. As we worked nearer the top of the gully we topped out against the rock walls of the upper mountain. We worked around these and through more loose rock til we made a flat spot on the saddle. All throughout one of the greatest difficulties was the feeling we couldn't loosen any rock lest it fall down upon people below us.

In the saddle at the top of the lower gully, bottom of the Lavender Col (video credit: David)


At the saddle we took a refueling break and started checking out the upper gully, the Lavender Col. We were pleased to see, that at least at first, it was more rock than dirt. In fact in the lower part of the Lavender Col it was mostly talus. We started working up through it and found this pretty easy going. As the ascent continued the talus grew smaller and we started to see faint dirt trail segments again. David liked working the rock in the middle while I attempted to work some of the trail segments. About halfway up we did see a lingering snow patch in a corner on the side of the gully. Past that point we started hugging climber's right of the gully. We found it easy to use the solid rock on our right to help with working up the steep terrain of the gully. We followed that right side til the top of the gully.

Middle of the Lavender Col hiking up below the V-notch (video credit: David)


It was quite clear about 20 feet or so from the very top of the gully that there was a left turn to the obvious V-notch. I worked my way up to the V-notch and indeed found some pretty real exposure to the left. To climb the notch it involved a good reach to a rock that was wedged in the floor of the notch to get going. A second rock wedged on the bottom became the next hand hold. Other than these two rocks there weren't really great handholds to pull yourself into the notch. We worked it and quickly found ourselves through.

Terrain right after the V-notch and before the final summit push (video credit: David)

Above the notch there was a right turn and a 40 foot fairly easy rock/dirt ascent to another class 2/3 climb to the climber's left. This area though it involved some scrambling wasn't really exposed or that difficult. Above that last climb the trail opened up into the summit area. There was another 70 foot or so ascent through some fairly solid, sloping, broken up rock to the summit. 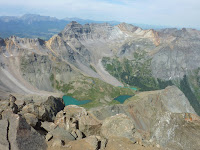 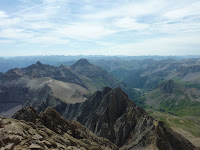 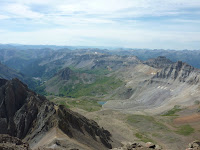 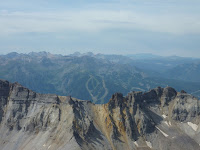 Summit views.  This peak is a winner!

On the summit we ran into a very nice group of 3 guys who had come up the southwest ridge. We were impressed with their work and they indeed said the ridge had some solid exposure and they didn't wish to downclimb it. The other two groups we had started near also made it to the summit while we were there. We had some great talks and pictures with the good people we met up there. We probably spent 30+ minutes on the summit enjoying the priceless views. We gave some descent pointers to the groups that had come up from the ridge and then started down.

The descent back to the V-notch was fairly easy through the semi-steep terrain. We were concerned with the V-notch descent as it would involved some blind placement of your feet as you tried to drop out of it. David worked it first and was out before Dad or I even reached the notch to watch. I went next and faced in to the rock while David helped spot. I lowered myself to begin using the two wedged rocks as handholds and blindly eased my feet out of the V-notch while David helped me with placement. I made it through well and David then helped Dad work his way through as well. As we prepared to begin descending there was another guy ready to descend the V-notch. David helped spot this guy and then a girl came and he spotted her as well. Those two would end up descending the Lavender Col mostly with us as well.


The descent of the Col wasn't too bad. We hugged the climber's right again for the upper half. In the lower half we mostly climbed through the stable rocks in the middle of the gully. We again took a refuel break in the saddle below and had another good talk with a father/son combo whom we met on the summit. They too had climbed the SW ridge. The father told us about the hut system in the European mountain hikes which was quite interesting. The descent of the lower gully was messy. It was almost harder than the ascent. We mostly worked our way down just to the climber's left of the large steep dirt center. We really took our time through here, since we had a lot of time, and gradually made our way out. At the bottom of the gully we looked back up and could see some weather starting to move in, so we were glad to be out. 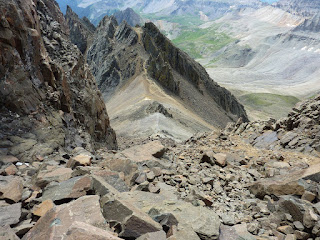 The traversing trail back to the upper TH went pretty easily. We met a nice couple at the upper TH who had a truck that had dr riven up just to have a picnic with the views. After another short talk we began our descent of the road. On the way down we must have passed 7 or 8 different vehicles heading up to the top. Several were rental jeeps. We made it back down to the lower TH before any of the groups with vehicles had passed us. All in all we were pleased with our climb of Sneffels today. It definitely did not disappointment and it definitely was not without challenge.

The entire track of the Mount Sneffels hike is available here as well as several waypoints from the hike.

You can see all of my photos in my Google Photos Album. Click the photo below to go: 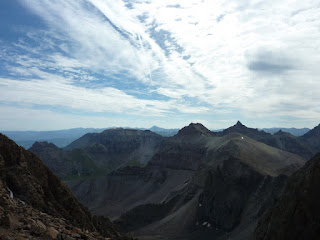