Quandary Peak was to be the first 14er attempt for my two youngest boys, Jonah and Seth. Jonah is 6 years old this summer and Seth is 4 years, 11 months. If Seth makes it he'd be the youngest in our family to summit a 14er, eclipsing his older brother Luke's record of 5 years, 7 months. We settled on Quandary Peak for this job because of its relative ease in route and the 6.75mi distance seemed within reason for the boys. We helped prep them this week with acclimation hikes on Mt. Royal and other trails in the area.

To give us maximum time to hike before the afternoon weather window we got up at our condo in Frisco at 4:30am with hopes to hit the road by 5am for Quandary. We were close enough, it was 5:05am when we left and were on the road to the trailhead. We made our first stop at the lower parking lot to visit the port-o-potty there and then we were the 2nd and 3rd cars to park in the main lot by the trailhead. It was 5:55am when we finally got our group of 6 started. The sky was full of rainy-looking clouds and the forecast was sketchy so we were saying our prayers for the day.

The boys were slow going getting started on the trail. It takes some time for those little bodies to get going this early in the morning. I was also a little slow. I had just arrived in Denver at 10:15pm the night before, which meant I was working on less than 8 hours of acclimation and less than 3 1/2 hours of sleep when we got started. The trail up through treeline starts fairly steep but then mellows some as it winds through the trees. It heads for the south side of the east ridge and gradually ascends the south side. It is clear CFI has ensured that the Quandary trail and all of its crazy traffic is on a very sustainable trail. As we were ascending higher on the south side of the east ridge the sun finally decided to come out and to our amazement the skies cleared up pretty well in our vicinity. Take that!, iffy weather report! On the crest of the east ridge we began to have mountain goat sightings which the boys enjoyed. We were also spotting and hearing picas running through the rocks. We also spotted a weasel-like animal ahead of us on the trail.

Seth was the shocker on the ascent as he was constantly motoring ahead and nothing seemed to slow him down. He carried nothing today, which was a good idea. Jonah started with his pack and just carrying his water. I filled his platypus bladder with almost 2 liters, which was a mistake, as it weighed a fair amount. I ended up carrying Jonah's pack on the front of mine for the entire ascent. For the descent I emptied most of the water out and he did fine carrying it. The east ridge seems to go on forever. When you're at the main saddle you look up and think, "ok, not too far now." But as you ascend you just keep on going and going. Seth was well ahead with Grandma and Papa (my parents) and Luke was also nearing them. I brought up the rear with Jonah who really struggled the last 800 feet or so. Both Jonah and Luke were dealing with slight headaches and some tummy aches. Seth seemed invincible on the ascent.


Jonah and I summited 10:45am, the others may have been 20 minutes prior, and it was just in time as the skies were starting to look less favorable. We spent about 20 minutes time on the summit snacking, calling Sarah and getting some good pictures of the boys. I was told that when Seth reached the summit, those who were up there, gave him a round of applause for achieving the summit. I thought that was really very classy on the part of our fellow hikers. Everyone was very supportive and cheerful for the boys as we hiked today and we certainly appreciated that. We didn't delay any longer on the summit as it appeared storms could be approaching.


As we began the descent I was impressed with all 3 boys. I didn't realize they were such adept "mountain goats" when it comes to going down the mountain. We made very good time descending the upper portion of the east ridge. We ran into more actual mountain goats in the flatter portions beyond the saddle.

As the descent on the east ridge began to drag out I could see the energy in the younger hikers wane some. As we entered treeline and the trail curled north and east around the bottom of the ridge we started getting a light shower finally. It did not appear to last more than 20 minutes however and we were pleased to at least be down below treeline. We worried about the 1-2 dozen hikers still above us who we saw on our descent. Seth finally hit the wall, so to speak, during the light shower. I was walking with him hand-in-hand as he had had a slight spill on the trail earlier that made him mad. He started crying through there and wouldn't tell me what he wanted. I could tell he was just as tired as could be. I had a debate in my mind whether to just carry him for awhile, but we really wanted him to achieve this summit up and down on his own. So I held off and we just walked and walked while his sobs started to slow. We finally took a break with the others and after this break he perked up for the last half mile hike out. We were out sometime around 2:10pm and the skies were looking a little better again.

In all I was most pleased with the performance of the boys this morning. Jonah and Seth were both successful on their first 14er attempts and neither got bad altitude sickness on the way. For Luke this was his 4th 14er summit and he is really starting to enjoy this. Hopes will be ready for us to make another go at a new summit when we are out in Colorado next summer.

The entire track of the Quandary hike is available here as well as waypoints for the TH and summit.

All of the photos from this hike are in the Picasa slideshow embedded here. If you click through you can see them in full-size and browse them easier on the Picasa side: 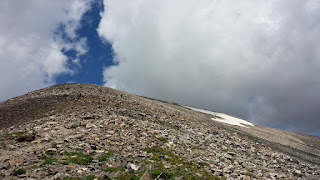