For myself, today was day 5 of 6 preparing to hike a 14er summit. Last Friday my family and I successfully summitted Quandary as a "warm-up" acclimation hike. On Sunday and then Monday Denny, David and I hiked the Wilson's. Yesterday we had a wonderful hike on Sneffels. And now today El Diente was on the table. Thus far, the weather had been great to us. However, today's report was the worst of the week. We were hopeful it would hold off til close to noon and give us a chance to go for El Diente's summit. We set plans to wake up at 3am to give ourselves as much time as possible to hopefully beat the weather. Our new friend Paco was also ready on time with us. We were able to hit the trail at 3:25am.

As we got started, the cloud cover was already thick, though we had seen this on days previous. As usual we made great time in the dark along the Kilpacker trail. Early on there is a junction with a trail heading off to the Navajo Trailhead. Later there would be a junction with "Navajo Trail" connector to the left and "El Diente Peak" trail to the right. We enjoyed talking to Paco. We found out he is an ultra-marathoner having done 50 and 100 mile runs. He trains with at least 45 miles a week. He was from Houston and was up here for about 2 weeks to climb peaks. He's even done several of the volcanoes down in Mexico that go up to 18000 feet.

The Kilpacker trail wraps its way around a hilly slope and as it completes this long traverse it then starts to climb into Kilpacker basin. Along the way we had a crossing over Kilpacker Creek which involved walking on a fallen log to stay out of the moving water. With Paco along I think we made an even faster pace than normal as the food and regular breaks were farther and fewer in between. Through the woods it was easy trail to follow and as we passed meadows we looked forward to the possibility of seeing them in afternoon sun for the great views they must be.

As we hit the basin the trail began to ascend more rapidly. After a junction where we had stopped to grab some food the trail quite steeply climbed through the trees to get well above the creek. It flattened for awhile and then made another move higher up the slope in the basin far away from the creek. The trees and the dirt trail soon became more rocky. The trail then started ascending into the talus slopes. It was an easy trail to follow with cairns. After the initial ascent the trail moves through a grove of trees and some willows and in here the trail ascends quite steeply again.

After the grove and willows its all rock from there on out. We were thankful the trail through the talus slope was continually easy to follow and we weren't having to make our own scrambles and route through the talus. As we neared the upper basin we could tell the clouds were not going to get better. Indeed we even started to feel some sprinkles. We had a group meeting and the consensus was it wouldn't be a good idea to go for the summit with these threatening conditions.

David and I at least made a scramble higher into the basin to where we could see where the route begins the scramble up the south slopes of El Diente. As we made it up there it became much windier and cooler. I took some photo and video of the route and was pleased with what I saw. The south slopes route didn't look too steep and it seemed clear enough to follow. David and I scrambled back down to where Dad and Paco were waiting and again we all confirmed that the summit was not going to happen today. The clouds showed no sign of letting up and the already present sprinkling rain wasn't going to be good for high altitude rock scrambling. (As it happens, our hike out confirmed our suspicions as we were drizzled on the entire 3 hour hike out) 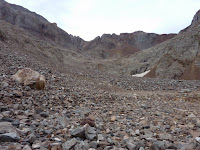 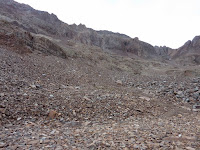 Views from our high point at 12,548. We scouted out the south slopes route.
So began the long march out back to the trailhead. We ended up 5 miles in which meant there was likely only a mile of walking to go with about 1400 feet of elevation. As we started our descent we weren't getting wet just yet. But as the hike out continued the drizzle began and became more steady. The drizzle would eventually stay with us the entire hike out. We made our way through all the talus and steep descents on the return without any trouble. At one or two instances we almost lost the trail in the willows as they were overcrowding the trail at points which made it hard to see if the trail turned. 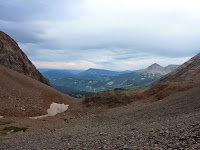 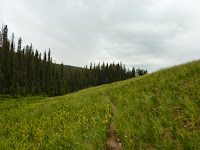 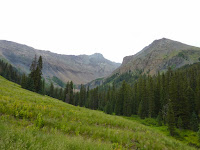 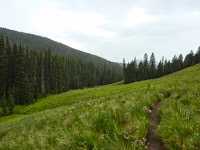 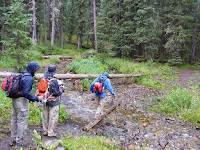 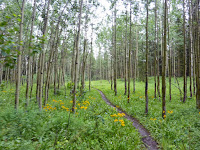 Views on the hike out

About halfway back we had a surprise. I was leading the group and I heard a rustling sound, as I looked up I saw a black bear begin to rough off about 50 yards ahead of us up the slopes into the trees. David saw him as well, and we only caught a couple second glimpse of him. It was the first time we'd seen a bear on a 14er hike. Oh how I wished we had a photo to share!

After we passed the area with the bear we ran into a woman solo hiking. Immediately I noticed she was wise and had a bear bell and I advised her that we had indeed just seen one. She seemed a little startled at first but she did decide to continue hiking. She appeared to be doing the "loop" which involved starting at Kilpacker TH, taking the connector to the Navajo Trail, hiking that out to the Navajo TH and then hiking another connecter back to the Kilpacker TH. We also ran into the couple camping near us at the TH and had another nice talk with them. It was just after 9:30am when we returned to the TH and thankfully the drizzle had let up and all but stopped then. As we packed up camp the sun even tried to poke its bright shiny head out to give us some beautiful views around the Kilpacker trailhead.

The entire track of the Kilpacker Basin/El Diente Approach hike is available here as well as several waypoints from the hike.

You can see all of my photos in my Google Photos Album. Click the photo below to go: 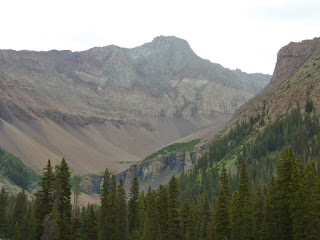