We moved wake-up call back half an hour today knowing we wouldn't need as much time for the Peak as we did on Mount Wilson yesterday. So we set it for 4am. There was some concern how our legs would feel this morning after yesterday's long haul, but we were pleased to find they felt pretty decent getting started. We ate our quick breakfast and took care of our normal morning routines and were on the trail back to Rock of Ages at 4:23am.

As we moved up the old mining road trail in the dark we did feel some fatigue in our legs getting started, but as we filled up on electrolytes and calories this helped the energy flow. We were blessed this night and most every other night of our trip with a nearly full moon which helped add light to our headlamps during these early morning hikes. Though we dreaded the repeat of this long road the initial hours in the dark went well and almost enjoyable in the peaceful darkness.

When we reached the upper parts of Silver Pick Basin this morning I was true to my word from yesterday. We ran into the rockfall area where the trail had been wiped out and I decided to try my re-route. You can see this in my second Google Earth photo below, the blue track is my ascent route where I worked up through that gully that looks snow-filled. In reality there was a snow patch there but I climbed up on talus alongside it. As I moved through there I found lots of old mining equipment. Most was all broken but I found pieces of rusted out metal, wooden planks, and even bits of leather. At the top of that gully I had to move laterally across another talus field to catch up to the others on the main trail. It probably wasn't any quicker but I enjoyed bypassing that loose mess covering the trail.

We cut roughly a half hour off our ascent time to the Saddle and made it around 6:56am. The weather up to this point was just perfect. The traverse from Rock of Ages saddle over to the Wilson-Gladstone saddle was a challenge unto itself. It begins with a narrowing of the ridge which makes for some very careful hiking at points to maneuver the rocks and trail. It brought back memories of the Eolus catwalk for just a little while. As this narrow section of the saddle ends there is another flat section of saddle before the trail ascends along the slope of the tip of Wilson's southwest ridge. The traverse between the two saddles was on a fairly steep slope, though the trail itself was manageable. The cairns and dirt trail were pretty easy to follow through this section.

At the Wilson-Gladstone saddle we had beautiful views of the whole area. We were pleased that the route did not look all that bad. We had read ahead of time that there were to regular options heading out of the saddle. One was to descend 100 feet on a very steep dirt trail and then reascend on a fairly clear dirt trail to the traverse route. The other option is to traverse through a steep class 3 section. We decided to do the dirt descent and indeed it was a difficult descent on the loose dirt. As we neared the bottom we were pleased to see a clear dirt trail that headed back up towards Wilson's slope. We followed this and picked up a well-cairned trail. We followed two guys and a dog, whom we had met on the ascent to Rock of Ages, and their route. They went the class 3 section.

After the route-finding mess on Mt. Wilson the day before we were pleased to find that the traverse over to Wilson Peak was easy to follow. There were really no sections through here that went above class 2+. The route eventually did make the ridge crest where we were greeted with views back to Silver Pick Basin. From the first point we hit on the ridge, the route continued its ascent just off the east side. This led us to a large flat spot on the ridge where we were able to take some amazing photos. From there it was another short ascent along the east side of the ridge to one last flat spot that revealed the false summit. It even looked difficult to gain the false summit at first. As we pondered the terrain ahead we noticed a dog coming down a narrow, steep trail that lead to the false summit. As we saw how the dog came down the "easier" route revealed itself and we were pleased. The dog was with the pair of hikers we met earlier who took the class 3 route from the Gladstone-Wilson saddle. He stayed at the false summit while they went to the true summit. Moving carefully, that the dog wouldn't cause us to lose our balance as he tried to run amongst us, we made our way safely up to the false summit. 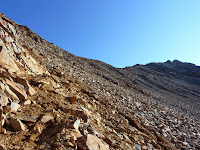 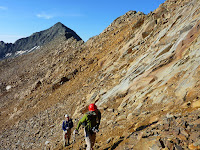 Much of the traverse across Wilson's slopes looks like this 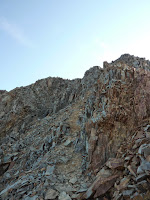 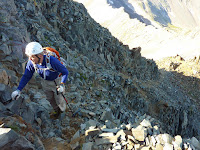 The narrow terrain up to the false summit
From the false summit the view was quite dramatic. We had seen most of this view previously from route photos. What we hadn't seen is what the descent from the false summit looks like or the terrain in between. The summit ridge proper became a set of towers that were clearly undoable. But we could see that if we could make the very steep 50 foot descent off the false summit there was a way to traverse mid-way up those towers. I attempted this at first but upon reaching a ledge and scouting the next moves I didn't quite like what I saw. The reality was I just didn't see the route that I should have to make that traverse happen. We then could see a descent of another 50 feet which would bring us to a point where we could round the rib that my ledge was perched on and then reascend 50 feet to begin the full on ascent of the summit. We were looking at the pitch that the main route descriptions often show and we began ascending close to the summit ridge, to the right of the narrow gully. We found a narrow climbing path through the rock that was steep but full of holds that we could move through. This gradually moved us up to the summit ridge where another 20-30 feet of climbing and scrambling remained til we topped out. 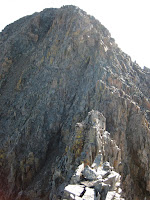 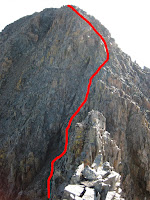 The dramatic view from the false summit. Our approximate route is drawn in red.
We never crossed the dark gully in view, and instead used good rock to ascend and
descend to the climber's right of it. 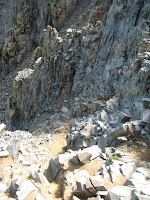 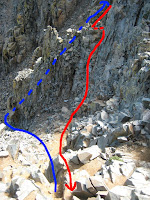 A closer look at the terrain between the false summit and summit. Our "ascent" route
is in blue.  We went down below and around the rock rib.  Our "descent" route was
in red. This worked much better.

At that point there is about 40-50 feet of near flat ridge to gain the true summit which was a very rewarding place to be. As we moved up through all this terrain we were very cautious to be looking down at it from above so as to remember it for our descent route. We topped out at 9:09am. 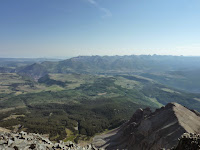 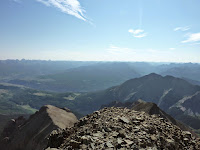 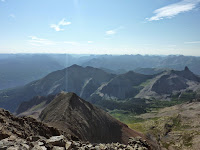 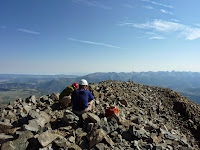 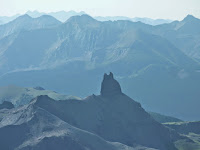 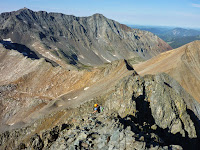 We spent a good amount of time on the summit as the weather was perfect and we had plenty of time this day. Like Mt. Wilson yesterday, we had the summit to ourselves. The other groups we had met were already headed down. As they began their descents we watched them to ensure we knew the good routes heading off the summit. Its amazing how everything can look different from above and how easy it can be to lose the route that was ascended.

We began the descent by finding our ascent route which we were successful on. We had only one section of descent where we struggled a bit to find the way. We made our way down facing in mostly through the steep rock til we hit the traversing portion to the false summit. Here we decided to stay high and we scrambled over rock to the perch I had been at earlier. This worked well and saved us from descending down and around the rib which we did on the ascent. Climbing back up to the false summit was still very steep but much easier than descending it had been.


Past the false summit we made the steep descent down from there and it began to be smooth sailing heading through the trail down the ridge and the slope. We met a group of 3 still coming up. They were a group we had passed in the dark early in the morning on the Rock of Ages trail. Two of them looked out of shape and we were concerned about their ability to handle the difficult class 3 at the end. Later we looked back and saw them at the false summit but don't know where they went from there.

When we neared the Wilson-Gladstone saddle we decided to traverse through the class 3 this time as opposed to descending down low through the steep dirt trails. We stayed almost level through this whole traverse and were hugging rock at points to stay on the face. It was somewhat exposed but we felt this route ended up well and we were pleased with it. In hindsight we very well could have done this class 3 route in both directions. I did observe that when you are on the Gladstone-Wilson saddle it is hard to get a grasp of where this route heads and where you are supposed to exit it. When you are descending from above its easy to see where you need to hit the Gladstone-Wilson saddle.

At the Saddle we ran into two other groups who were looking to head up. We shared with them what we could. The traverse back to the Rock of Ages saddle went without any problems. On the "catwalk" in the ROA saddle we had fun with some pictures and enjoyed our being nearly down through any difficulties. We grabbed a good snack at the saddle to fuel up for our descent. It took us 1:50 to get back down to ROA from the summit. 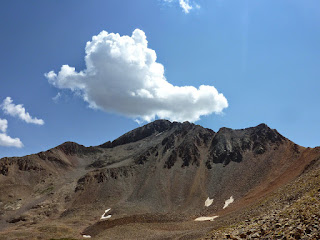 The descent of the Rock of Ages trail today wasn't quite as grueling as yesterday because we had the sense of accomplishment, and the knowledge we wouldn't have to do this again anytime soon. We were also feeling better physically for most of today. It was 1:36pm when we got back to camp.

The entire track of the Wilson Peak hike is available here as well as several waypoints from the hike.

All of the photos from this hike are in the Picasa slideshow embedded here. If you click through you can see them in full-size and browse them easier on the Picasa side: 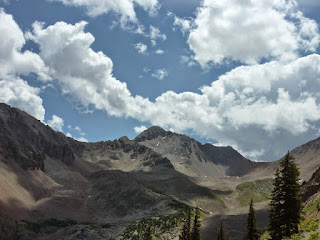