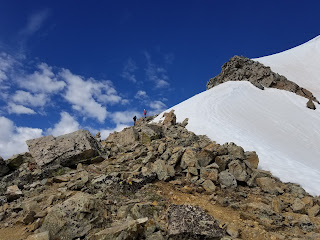 Trip Report:
We left the Sheep Gulch trailhead at 6:11am. My brother and I were the only vehicle there and at first the only hikers on trail. Having done all the Sawatch 14ers and looking at all hiking options for this June 2019, especially with the large amounts of lingering snow, we found Mount Hope to fit almost everything we were looking for. It was close and an easy drive from our base in Buena Vista. It had good distance and elevation gain. It had a mild amount of scrambling to get into some fun terrain. And quite frankly, its only an immaterial 70 too short to be a 14er, otherwise it would have all the attention the other 58 in the state are getting. In a way, I'm pleased it fell short, as it meant we had a delightfully quiet hike for just the two of us for most of the morning.

The elevation gain on this trail, heading up the south side of Hope Pass is immediate and unrelenting. The first mile or two leave you gasping without break. I'm all the more in awe and with complete respect for the Leadville 100 runners who do this pass during an ultra race. Our temps were in the low 50s at start but I was breaking a light sweat fairly quick. I would also attribute this to our pace, we moved swift from the start as we typically like to do.

Our first big surprise of the day came about 3/4 of a mile in around elevation 10,800. We were passing through a beautiful aspen grove and could see the remants of an avalanche that had cut a clear path down to this location. Trees down on both sides of the trail and evidence that a trail crew had come in to clear the trail itself. This would be the first of a lot of avalanche debris on today's hike.


The next big surprise this morning came about 15 minutes later, after just over a mile in, we found a creek pretty much running down the middle of the trail. During our descent we could see that for some reason the creek was being diverted onto the trail and not running down its usual outlet. There were enough big rocks on trail and aside it that for the most part managing this wasn't too difficult.

The biggest obstacle came in the heart of the ascent as we were crossing over the main creek drainage from the basin. A mix of a couple of large trees from an avalanche and some overturned willow bushes made for a bit of scrambling over debris. It was amazing all through this middle portion of the basin how much avalanche damage there had been, as well as how much snow still lingered. We commented several times how all the downed trees made it look like a bit of a natural war zone.

It was around 11,400 that we really began to encounter snow covering the trail consistently. This was lower than on other trails we had just encountered like Little Brown's Creek or Fourmile Creek leading up to the Buffalo's. Even as a south-facing basin it was amazing how much snow remained. At this point the snow was either easily avoidable or at near flat angles that it really didn't pose a problem other than bits and pieces that would sneak into the shoes on a small posthole. We didn't happen to wear gaiters today (nor would I say they had been necessary).


On the ascent to the pass there three snowfields at growing angles that we felt posed a moderate threat to us. The first two are pictured in the following pair of photos. We crossed both of them and both crossings were lateral crossings straight across. The runouts below each cross were several hundred feet. If one did happen to fall and asleep there was a reasonable chance you would take on all snow in the runout and miss the rocks, but no guarantee. We treaded carefully on these crossings with no traction, only trekking poles. The third bit of snow was just a bit higher in the basin and guarding the west end of the last couple of switchbacks. We happened to see a shortcut trail that would easily bypass that snow. We're not sure why this "bypass" trail existed but it looked almost as well travelled as the main trail.

Finally at 7:45am we gained Hope Pass. The views were quite wonderful. The clouds were slowly starting to open up for us as well. It had been overcast up to this point. This made for a 1:35 ascent to the pass. The weather was looking good, despite the clouds, and we were feeling good with the upper half of the trail to the Pass being easier than the lower half.


Looking up to Mt. Hope presented a fairly obvious route of running the ridge. The initial climb out of the pass was fairly steep up small talus and instantly there was no trail. We climbed up and over the first hump on the ridge and then began very basic scrambling either over and around the next few humps. The latter half of the ridge gets more difficult. The largest of the humps is about 2/3 of the way up. We traversed climber's left around it and ended up having to ascend a very steep grass slope to regain the ridge. On the descent we stayed on the ridge the whole way through and the rock proved easier.

The real attention grabbing parts of the ridge come in the last couple hundred feet. They became a class 2+, very nearly class 3 section. From afar as we gazed up ahead we weren't sure what the right route would be at first. The snow guarding the summit approach added to this question. We could see only a sliver of rock showing through the snow (you can see it just left of center at the top of the following photo). 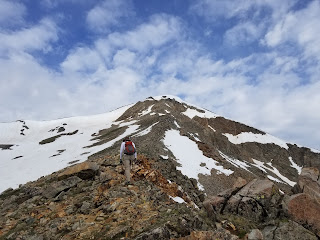 As we neared the upper part of the peak we could see a good route heading straight up the ridge crest. Almost always, the route presents itself as you draw nearer. It was steep with loose rock and dirt but a manageable route. There were a handful of hand-on-rock moments but nothing overtly class 3. At about 13,800 we encountered the snow guarding the summit. There was no available route to avoid the snow at this time. The picture below shows what lay before us. We stood there debating it for several minutes weighing out all the pros and cons. About 20 yards to climber's left began a 1000+ foot steep runout. You wouldn't want to climb into and fall down that. Falling down from directly above this spot would likely land one where the photo was taken into a flat area of rock extending about 10 feet before it too cliffed out. We had brought no traction or ice axe with us with a recent conditions report somewhat erroneously implying no snow difficulties on the main route.

Quite frankly, my conservative self was ready to say "we don't need this summit, its not worth playing around without protection". I told my brother afterwards I was about 70-30 for not going up. As part for the course, he said he was 90-10 for going. He's always the go-getter.

I was mostly concerned about descending this section as opposed to the ascent. Going down is always more dangerous. He finally said "let me try it out, and see how the snow goes". He started up as the photo illustrates and we found in most of it he would posthole knee deep. Seeing the snow was this soft I felt a little better about the descending of it. The snow itself would provide some protection. We'd probably get wet, but sliding and falling seemed a remote chance.

We climbed up the snow and just after rounding the corner hopped into the rocks. We would find the rocks to be the greater difficulty here. There was about 30 feet of near true class 3 climbing to gain safety.
We found easier terrain that led up over the top we had been seeing and this led to the appearance of a summit. We worked through easy ever-flattening terrain to find this "summit" was a false one. Happily, the true summit was no more than 100 yards off.

We topped out on Mt. Hope at 9:04am, a 1:19 climb from Hope Pass. The climb above the Pass to the summit turned out to be quite enjoyable. While we don't do all the class 3-4 climbing we used to when we were working to complete the 14ers, it is fun to still hone the skills every now and then and have some fun out in the mountains. We spent almost 25 minutes atop which, these days, is a bit on the longer side for us. But we were really enjoying it and had no rush to be down today.

As we descended back to and over the false summit we immediately took attention. The curve of the terrain on the south side sloping away from the summit was at such an angle that you could see nothing further ahead. We immediately were carefully to work to retrace our ascent route. We didn't want any risk of dropping into the wrong spot. We found the short class 3 section that would drop us into the snow climb and worked through that. Descending the snow field we took carefully but it worked well. I postholed up to my hips on one step. Upon leaving the snow I looked down and had blood streaming down my lower left leg. I must have either scraped a rock in the postholes or sharp ice crystals got me.

We carefully scrambled through the remaining class 2+ sections of steep rock. We had left a couple of temporary cairns for ourselves in this section just to make sure to make the correct turns and descend the right gully. We felt best to take those cairns down as we left.

Once out of the upper difficulties the rest of the ridge became fairly straightforward and carefully descending work.

We returned to the pass at 10:25am, a 0:55 descent of the ridge. The skies were really looking good now and this made for more beautiful pictures for us. The Pass was a moment of reckoning for us. We had talked about also climbing Quail today as it was right there. It did involve a 900-1000 foot climb and a lot more work. For my part, I said I had gone through most of my food just getting up to Hope and my stores were running a bit low. I had also put up just over 40 miles already in the prior 72 hours and had had my fill of elevation. I felt like Quail would end up just being a "checkbox" for me and not as enjoyable as I would want it to be. Ultimately, he felt the same. So we decided on descending and hitting the trailhead to go off and enjoy the rest of the day.


We worked very quick on the hike out. The patches of snow had softened even more. My brother kept a torrid pace stopping little and it was all I could do to keep up. We were awed once more during the descent of the avalanche debris which were lit up all the more with the sun hitting them and our eyes more observant on the descent. We made it out to the trailhead at 11:35am making for a 1:02 descent from the pass.