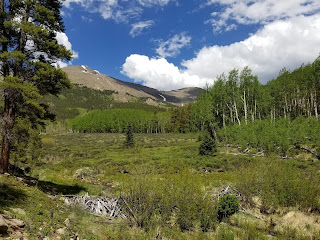 Trip Report:
With so many visits in hand to Buena Vista, it seems it was only a matter of time until we finally decided to have an adventure with the Buffalo Peaks. They sit prominently in view for everyone passing through BV as well as those driving around South Park. I think one of the big hangups that had kept us away up to this point was simply picking a route we would like to work for the summits. There really is no established trail to either summit but there are some basic routes that get you close.

My father talked to some people about the southern route which heads up a 4WD road to Fourmile Pass and then the west ridge of the peaks. The intel we had said it could be a 10-11 mile day if you had 4WD to get you to the end of the road. The bushwhacking would all be above treeline and at least from a distance appeared to be a straightforward ridge run.

The drive in is all about CR375 which will get you to the trailhead. There was a basic 2WD trailhead that we drove by hoping we'd go another 1-2 miles to a 4WD trailhead. This was where our first surprise came in. We drove no more than a half mile on the easy 4WD and found a well laid out trailhead with a gate and plenty of natural obstacles (intentionally laid down trees) blocking anyone from continuing further up the road. It was quite evident the rest of the road was henceforth closed. It was about a mile stretch of road.

After passing the upper-now-closed trailhead we hit our first bit of singletrack and soon made a short descent down to the Fourmile Creek. The morning temps were quite nice for hiking as they hovered right around 50 degrees.

At about 1.75 miles in we crossed the Creek for the first time and ascended a bit up out of what would soon become a marsh. As we climbed through an aspen grove we could look down and see a large beaver dam had backed up creek water to form a nice pond.


Above the beaver pond we entered a fascinating section of forest that looked like it could be a campground. All the undergrowth was gone and it was mostly a dirt and pine needle floor. The trees were a bit thinned out. The trail jogged to the south in here which has us checking our map to make sure we hadn't gotten lost. One also needed to watch the trail carefully here as the lack of green plants made simply the dirt path your only visual clue to the trail.


The rest of the trail up to the pass was mixtures of aspen and then evergreen. The trail remained good the whole way and as it nears the pass it goes into a few sweeping switchbacks. We encountered some backpackers coming down from the pass who said they woke up to 19 degrees this morning on the north side of the peaks. We were slightly skeptical. 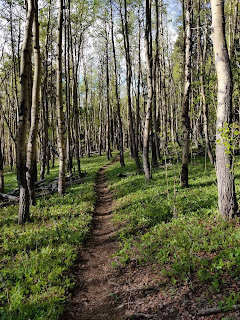 We gained Fourmile Pass and the turn off for the Buffalo Peaks at 4.6 miles in from the start. It took us 2 1/2 hours to make it to the pass. There was a bit of snow in the pass but it was melting fast. There is a large wooden pole in the ground marking the unofficial turn off for the Buffalo Peaks. From this point on it was a bushwhack with no trail. We were following someone else's GPS track from this point onward. The first several hundred feet were through thinned trees but it wasn't long til we gained treeline and had slightly more open views as to the terrain ahead. In general, the idea was to keep heading upwards.

Above treeline we worked our way up a steep grassy slope with fallen trees, dirt and rocks mixed in. A faint trail segment lasted about a tenth of a mile after treeline and then it was all open grass. The slope was a real workout. We worked upwards with a slight climber's right traverse in our direction. You couldn't see any peaks above you so it was your best guess what line to take.


At 12,100 we gained the plateau where the views open up and you are greeted with the 12,900 Peak ahead. You don't quite see the Buffalo Peaks yet. The route became a bit clearer at this point. There was still not trail through the plateau but it was evident you would walk the tundra across the relatively flat portion and then work to gain Point 12,900 preferably towards the right side. This whole section was much easier to work through than gaining the steep grassy slope below 12,100.


We never fully summited Point 12,900 as our line took us along the south side of its summit area continuing straight onward to the West Buffalo Peak. We did ultimately have to move a little north in our line as a snowfield guarded almost the entire east side of Point 12,900 with a small avenue melted out right down the middle. We worked down through that part to a plateau at about 12,800 and then began the ascent up to West Buffalo. It was a 500 foot gain but not overly steep. The first portion was mostly grass up to a bench-like part halfway up. Above there it was more a small talus scramble working up towards the summit.

We topped out on West Buffalo Peak at 10:46am, a 4:45 hike up to the peak. We were 6.5 miles in at this point definitely looking at more mileage than first intended. My father said this was as far as he was going today, and so I looked at my brother to see his thoughts. I had just put up 17+ miles yesterday on my Antero and White adventure and was looking at 13-15 today depending on our next move. He was interested in heading to the East peak and so I said I would follow. The ridge looked inviting with a bit of fun, easy scrambling along the way. We left our father at the West peak with instructions to hike down to the 12,100 Plateau and wait for us there. We didn't have radios today and so we didn't want to get too strung out in terrain without a clear trail.

Coming down off the West summit we didn have to make a 10 yard traverse of a snow field at a relatively low angle. Beyond that we were snow free. It was easy descending the first couple hundred feet and then the ridge became a bit more jagged. We could see how the north side of the ridge cliff out and rather dramatically in several spots. The south side of the ridge was more easy slopes. If one wanted to avoid all scrambling they could drop a hundred or so feet away from the ridge and move through mixed small talus and grassy. Closer to the ridge crest was still mostly class 1-2 hiking with a few spots of easy 2+ scrambling. I wouldn't say there was any one spot where hands were absolutely necessary. We had fun moving through the terrain.


My brother and I gained the wide open flat Eastern Buffalo Peak at 11:30am, a 39 minute traverse between the peaks. We have moved fairly well. We met another pair of hikers up there and exchanged taking pics. It was a beautiful summit with all the grass and the open views. I snapped looks at South Park and Antero Reservoir where we were just kayaking yesterday. The views of the Sawatch were unmatched.


We only spent about 5 minutes on each of the two summits hoping to keep this already long day from getting any longer. Its always a wonder to us how we spend hours and hours hiking and climbing to gain these amazing summits, only to spend such a small amount of time up there. We made good work on the traverse back to the West summit not wholly pleased about having to summit it twice this day. There was clearly no bypass to the north side and the south side did not appear to have an obvious bypass either that would save one both time and energy. We regained the West summit at 12:22pm, a 43 minute return. We stopped only for a picture and a quick check on the phones to see if we could make contact with our father and get his location.

We worked real quick heading down from the West Summit and then back up and over Point 12,900. We were hoping after that Point to get eyes on our father down on the Plateau at 12,100. That didn't quite happen. He also wasn't responding to our texts sent. This drew a small amount of attention but we figured he must have continued onward toward the pass. As I descended to the plateau it donned on me he had his Garmin Inreach and I had a data connection. I hopped on his webpage and was able to confirm he had indeed started on his way down. Apparently he had seen two other hikers coming down from Point 12,900, and thinking they were us, he started on his way.

We joined up with him halfway down the steep grassy slope below the plateau and hiked the rest of the way back down to the pass together. Given the bushwhacking nature of this last portion we figured it safest to stick together. Granted, it would be a small risk of someone actually getting severely lost.

The hike out from the pass was uneventful just following the trail out. We did stop at one of the creek crossings and I used my Sawyer mini filter to get some water out for each of us to keep going. The temps rose on us and heated us up a bit the last few miles out.